Why would a significant non-zero angle of attack be an advantage during 1st stage burn?

From videos of both the SES-10 launch shown in @RusselBorogrove's question, Cause of apparent plume deflection on SES-10?" and the Block 5 launch Bangabandhu Satellite-1 Mission at T+ 01:48 it appears the Falcon 9 uses non-zero angles of attack (or displacement angle) during the 1st stage burn.

The exhaust plume is aligned with the flight path (high dynamic pressure) and it's obvious the vehicle's roll axis isn't.

I believe the visual effect is due to the rocket flying a small positive angle of attack at the end of the first stage burn, combined with a steeply foreshortened camera view.

According to the simulation data at FlightClub (https://www.flightclub.io/results/?code=SS10), the rocket flies a positive angle-of-attack during the end of the first stage burn, peaking at about 4.6 degrees AoA. 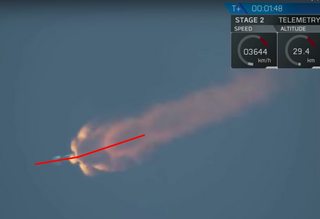 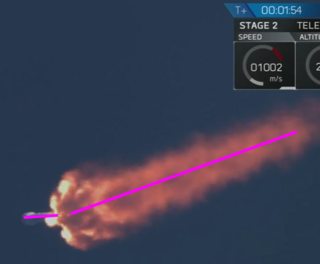 It is theoretically possible to fly an ascent trajectory with zero angle of attack throughout -- this would be an ideal gravity turn. In practice, launches have a fairly specific main engine cut off (MECO) state vector that they are guided to however. This requires some angle of attack, usually commanded via gimbaling and limited by q-alpha, to alter the trajectory.

Not the answer you're looking for? Browse other questions tagged launch aerodynamics flightclub or ask your own question.

26
Saturn V Exhaust Plume
6
Is aerodynamic lift ever useful in rocket flight?
16
Cause of apparent plume deflection on SES-10?
9
If not constrained by underpasses, etc., would Falcon 9 have been less of a flying noodle?
12
Why do the shapes of these two exhaust plumes from an Atlas V 411 look different?
5
Launch profile autopilot
5
Why are exhaust flames "jumping around" the bases of the Falcon-9 engine nozzles; NROL-76?
1
Angle of attack, or displacement angle?

23
Why did the Saturn V stage fairing appear to burn after separation?
16
Cause of apparent plume deflection on SES-10?