How exactly did the floor of an Apollo LM look like after EVA(s)? Seeking photo!

Five years ago I posted a question entitled "How was dust-mitigation addressed during the Apollo program?". While the question was answered rather comprehensively, it left me even more curious. The one thing I really wanted to see never showed up: Just one close-up photo of the floor of the LM or its hatch after EVA, no matter how bad, blurred or fuzzy it was.

the floor of an Apollo Lunar Module

look like after EVA(s) during an actual Apollo mission (before or during launch from the Lunar surface into Lunar orbit)?

Besides, by any chance, how did the hatch and its sealing look like? I'd figure all of it was all pretty dusty ...

I am looking for at least one actual photo!

The numbering of a lot of photos in the publicly available online archives suggests that not all actually excising photos were uploaded. It's always a selection of photos above a certain quality threshold, discontinuously numbered. It suggests that there is a lot of footage like totally fuzzy or "wiggly" shots which has not been uploaded into those online archives. Besides, there were always "incomplete" shots (due to stray light hitting the film while putting it into a camera etc) at the beginning of "analogue" film reels, which were usually just "discarded" by aiming at random targets for like one or two shots before taking any meaningful photographs. Where did those discarded and/or low-quality shots end up?

(Other than literally going through all publicly available photos, I have a feeling that the "second best" option is to actually ask one of the surviving astronauts who could have theoretically shot such a photo.)

Looking through the images on the Apollo Archive, which I believe to contain all publicly available images and checking the ones at the end of EVAs I was not really able to find anything satisfactory. The best ones were before lunar takeoff of Apollo 17

None of them directly shows the floor however. The second one shows a little compartment for the helmets. In general everything seems dirty, but not directly dusty/sandy.

How exactly did the floor of an Apollo Lunar Module look like after EVA(s) during an actual Apollo mission (before or during launch from the Lunar surface into Lunar orbit)?

Besides, by any chance, how did the hatch and its sealing look like? I'd figure all of it was all pretty dusty ... I am looking for at least one actual photo!

First to show floor during a mission.

Apollo 16 - Back in the Briar Patch - Before exiting, clean floor. 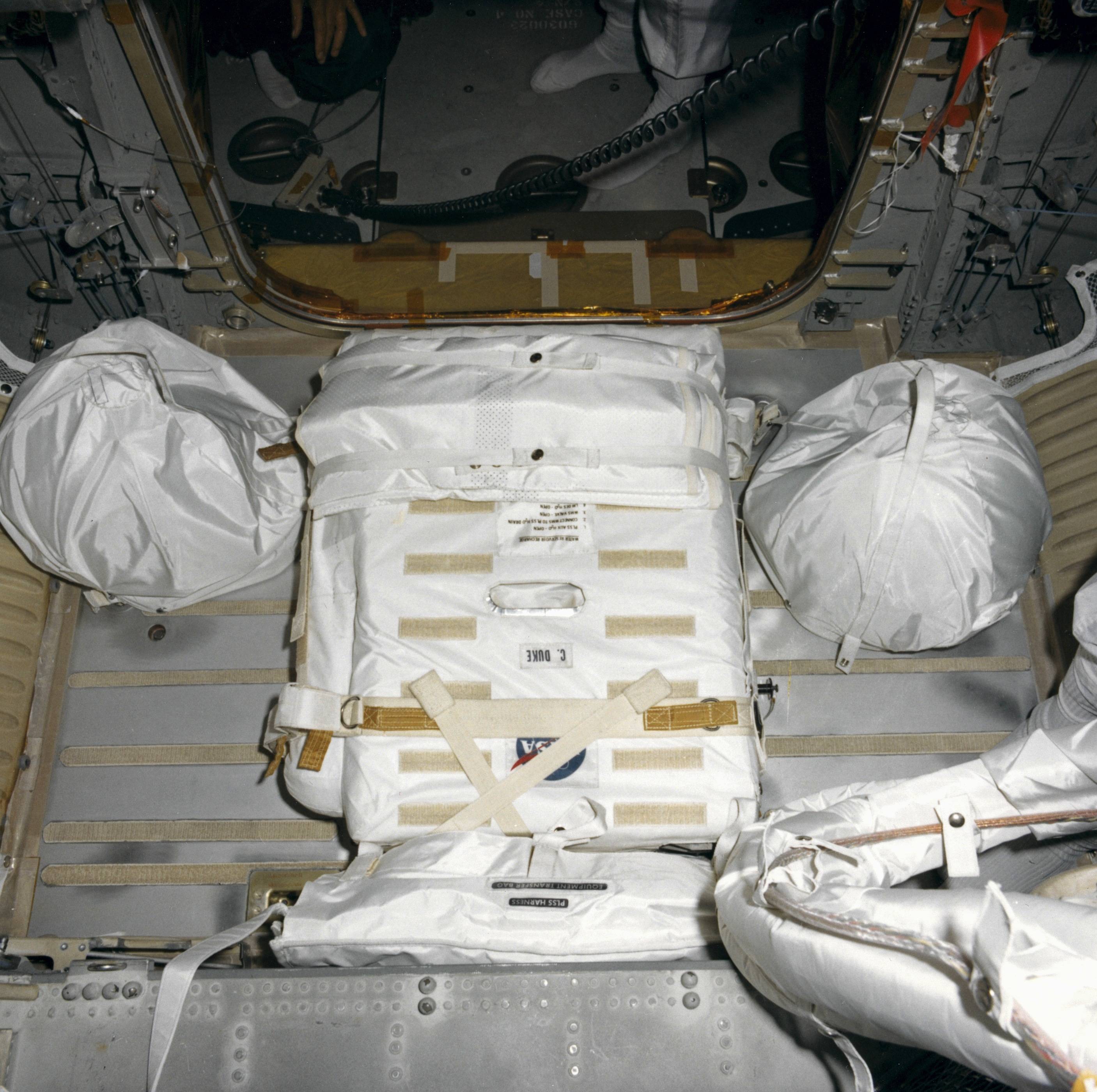 [John is about to start the intricate process of getting out the hatch. The small area available to the crew at the front of the cabin is best illustrated by images taken during final Apollo 16 (LM 11, Orion) and Apollo 17 (LM 12, Challenger) LM close-out on the pad at the Cape prior to launch.]

[A view from above shows the LMP's PLSS (without the OPS) and two helmet bags (containing the LEVAs) filling the space. As detailed on pages LV-4 and 5 in the Lunar Module News Reference, the useable floor area measures about 55 inches (140 cm) from side to side and about 36 inches (91 cm) from the hatch to the base of the 18-inch (46 cm) 'midstep' behind the crew stations. Note that the PLSS dimensions are about 26 inches (66 cm) long, 19 inches (48 cm) wide, 9.5 (24 cm) inches thick at the base, and 8.75 (22 cm) inches thick at the top. The photographer was standing on the midstep, with its edge near the bottom of the frame.]" 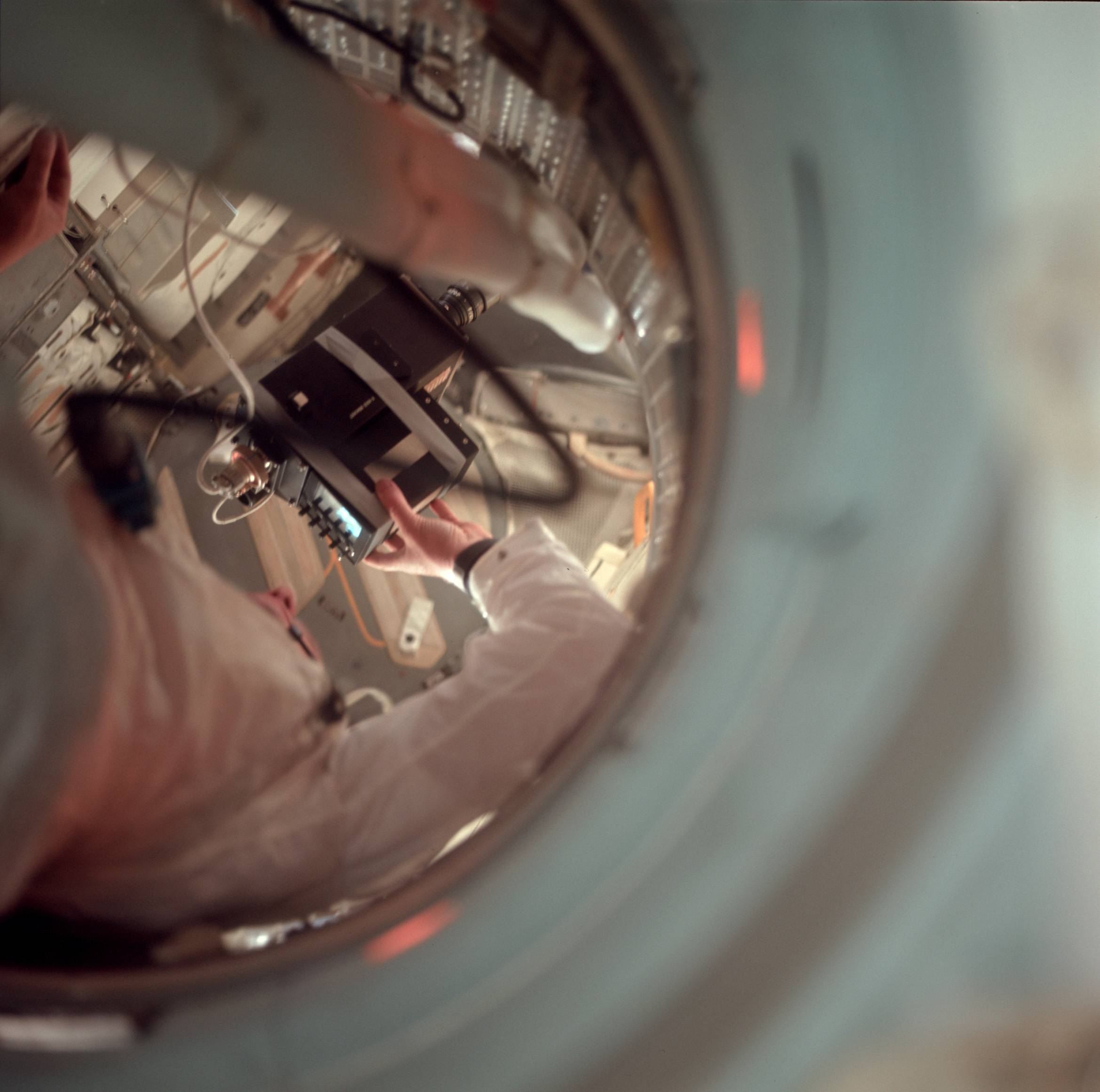 About 055:41. Neil floats in the tunnel connecting the LM And CM, using the TV to document Buzz doing a LM inspection. This photo was, of course, taken by Mike Collins. With regard to the TV camera, Journal Contributor Markus Mehring writes, "What you're seeing here is an extra TV monitor attached to the cam with the ever-present gray tape. Early crews had no such monitor or other means of image control and complained about their inability to easily/properly point the camera inside the cramped quarters of their spacecraft, so this was what they were granted. The camera is the Westinghouse color model, essentially the same model that suffered the burnout on A12, only that this one is IVA-black while the A12 camera was EVA-white. Also note that the camera is actually held upside-down (that is, we're seeing its top side), to capture the CM interior in proper alignment for the TV audience." Karl Dodenhoff has provided a labeled version." 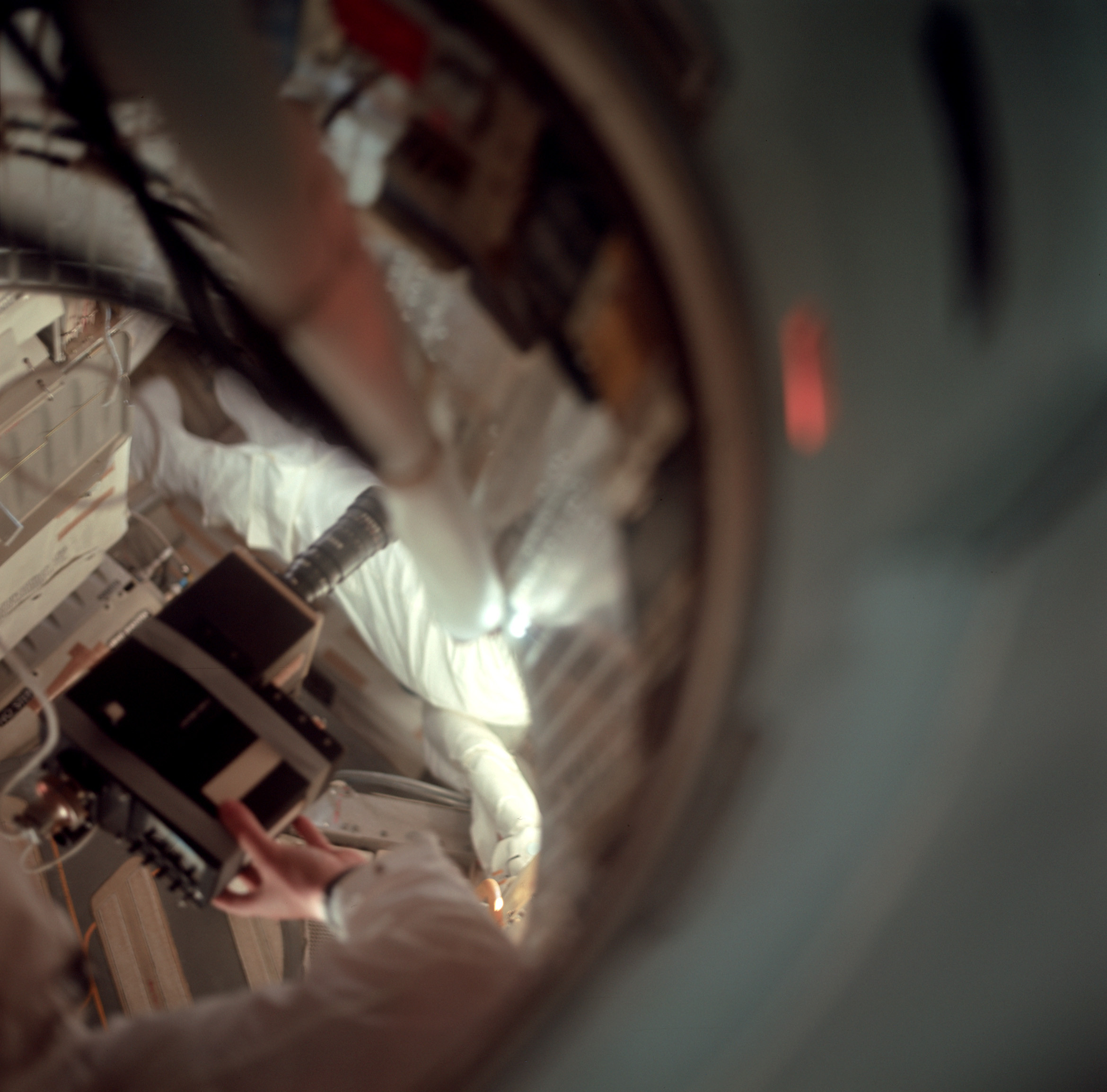 Similar to 5385. Buzz's feet are visible on the floor of the LM, beyond the tunnel." 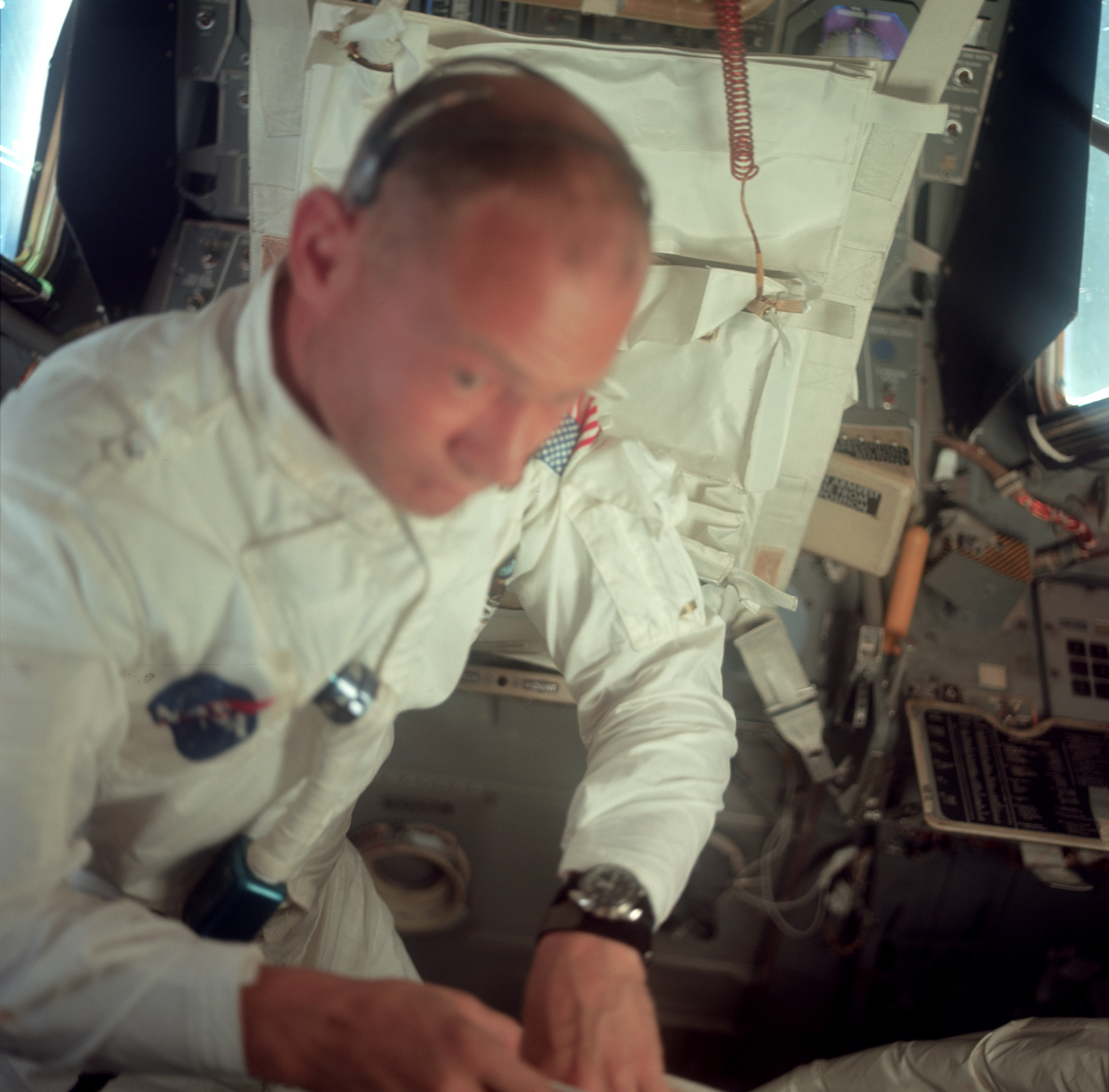 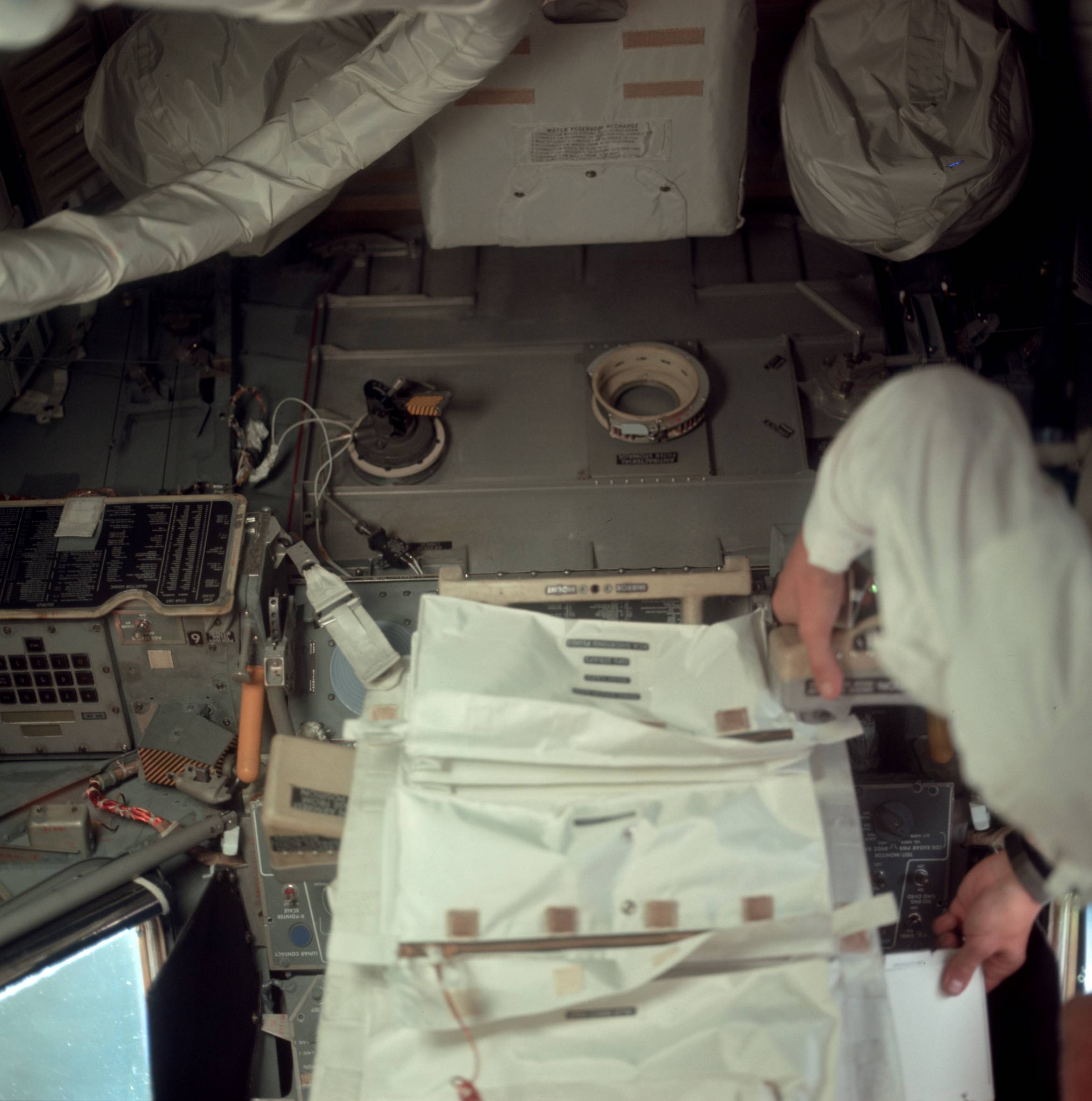 I noticed one answer didn't show the floor, here's a good look at it.

An annotated diagram and photos long after the mission, still looking for during the mission photos: 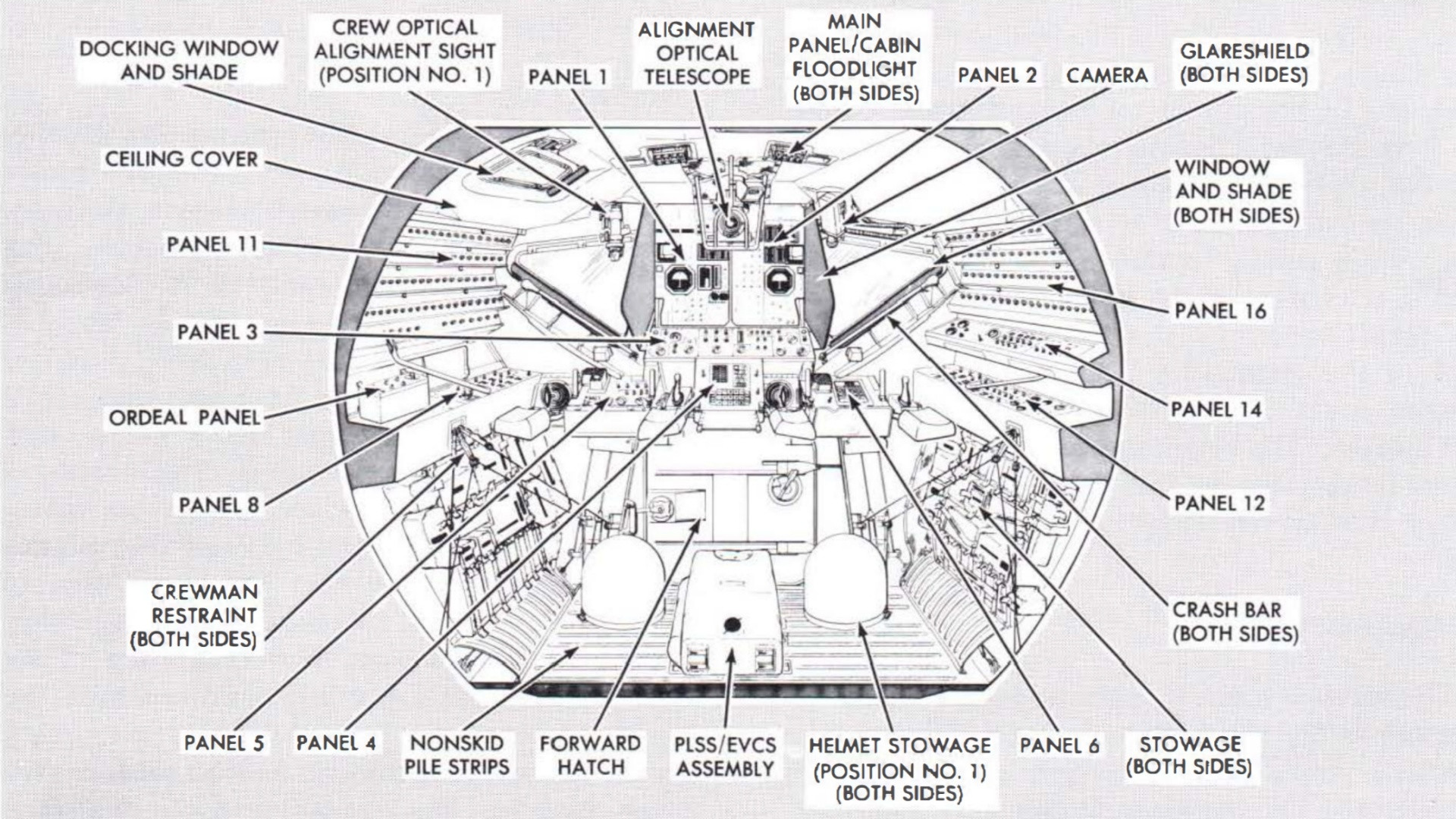 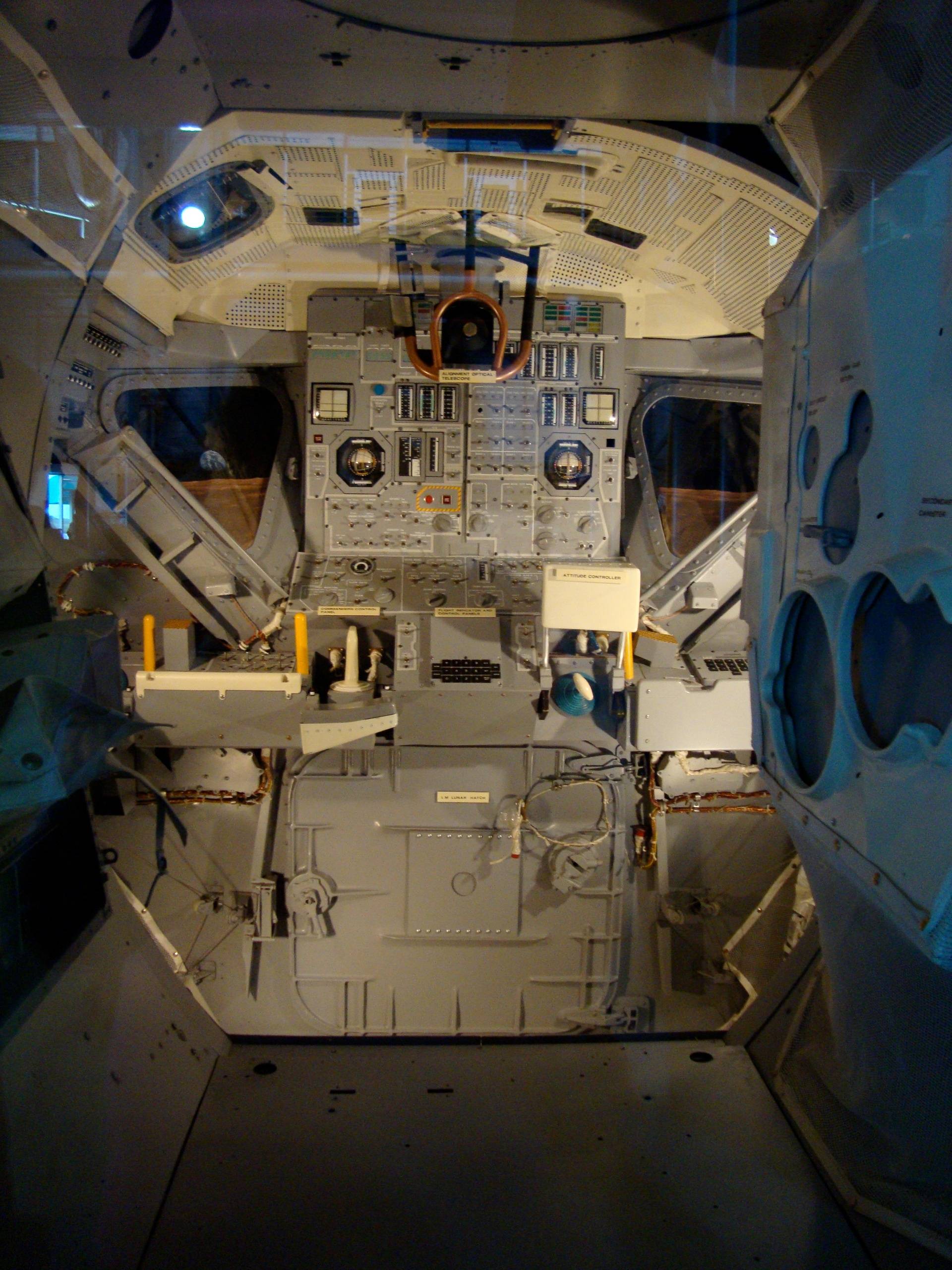 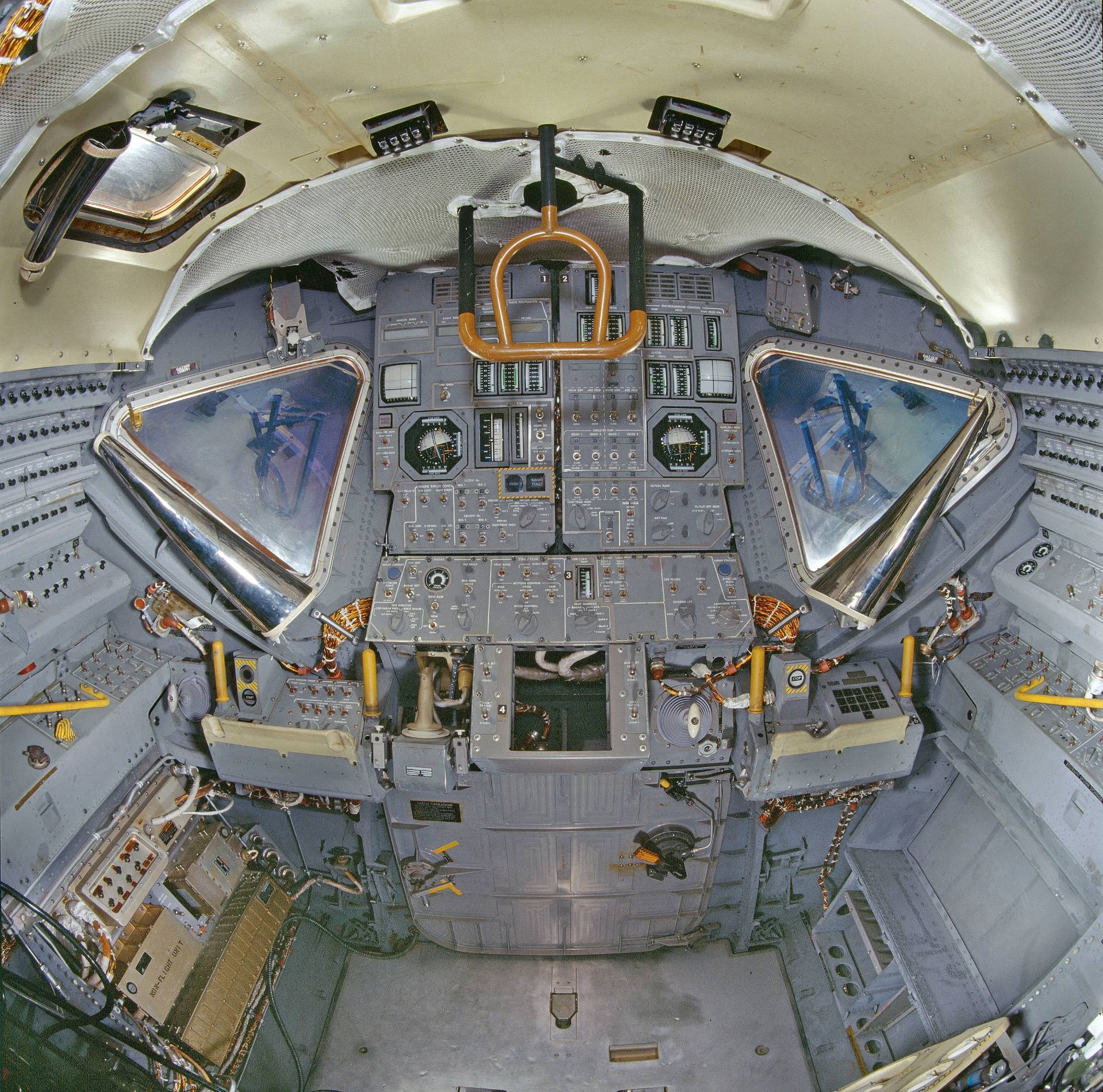 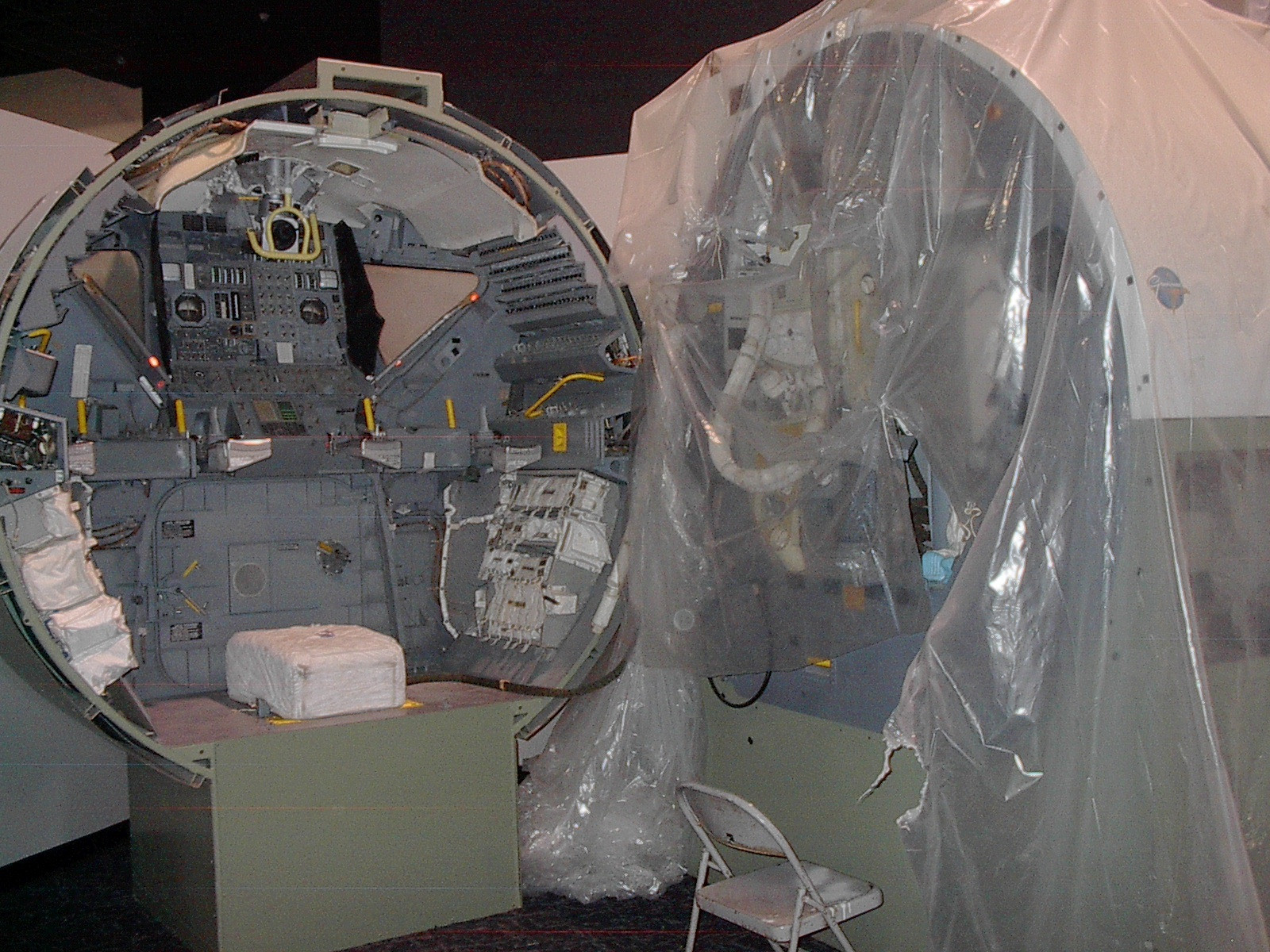 Here's Apollo 15, Falcon's floor with a bit of dirt everywhere. 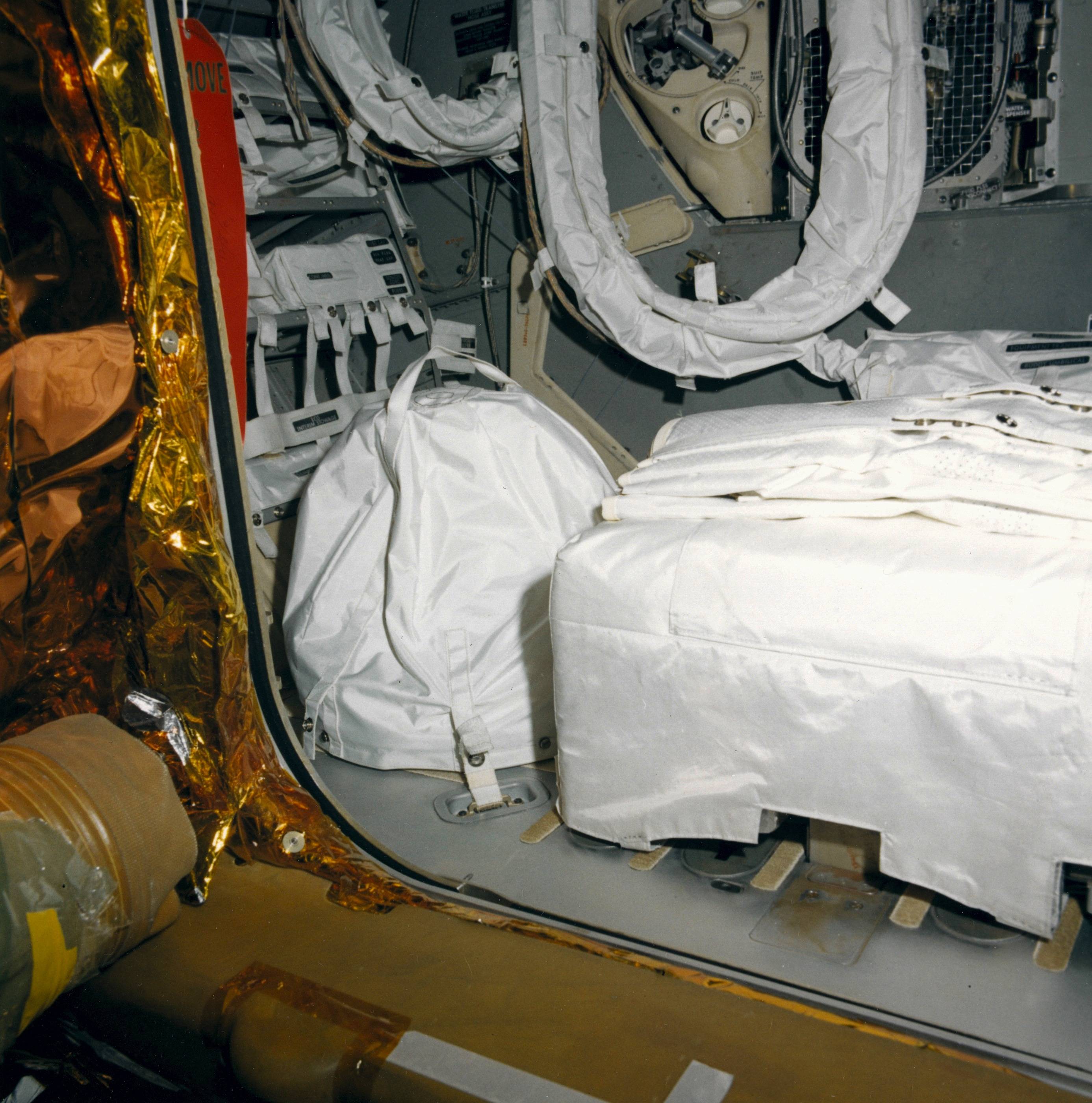 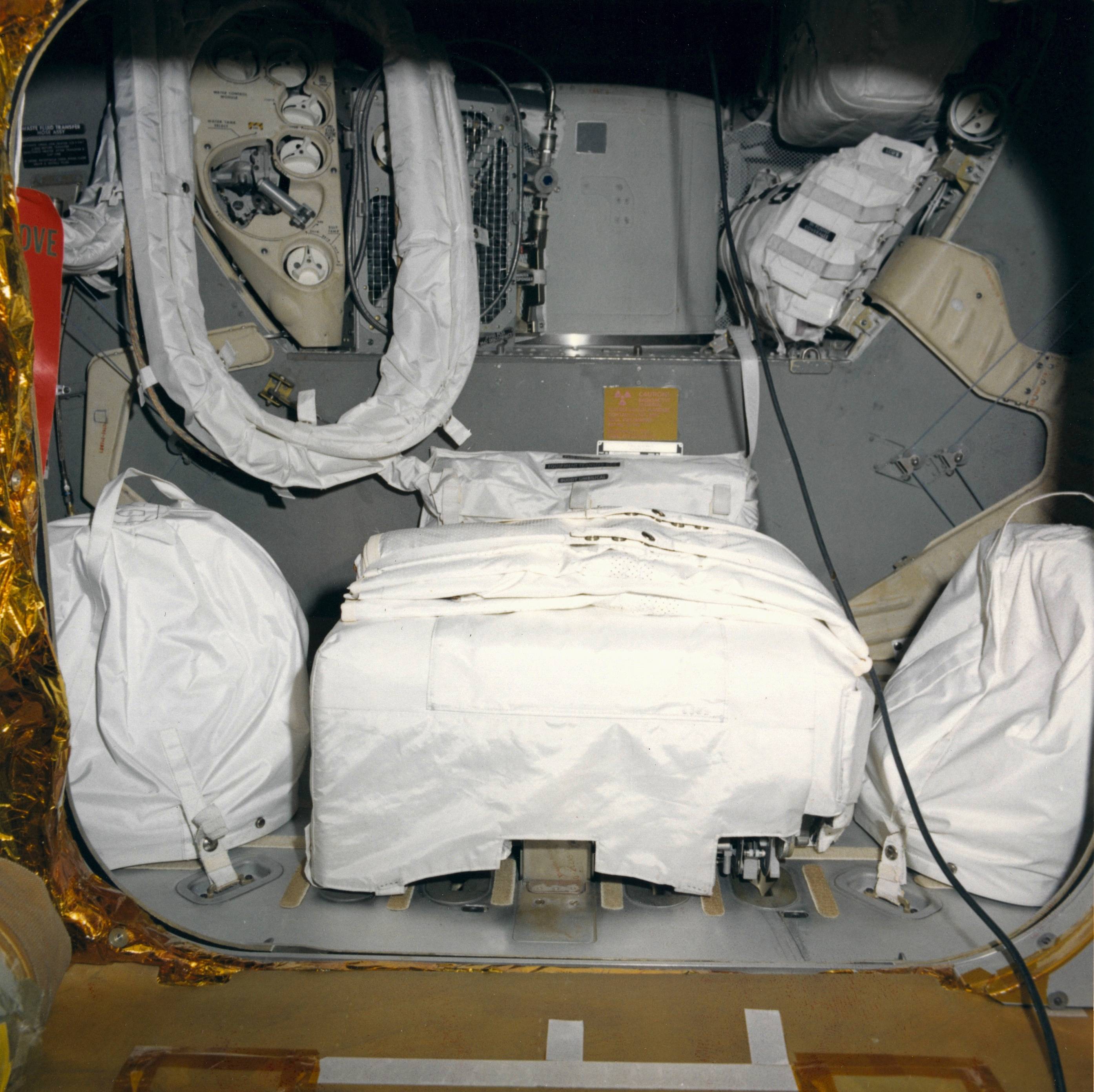 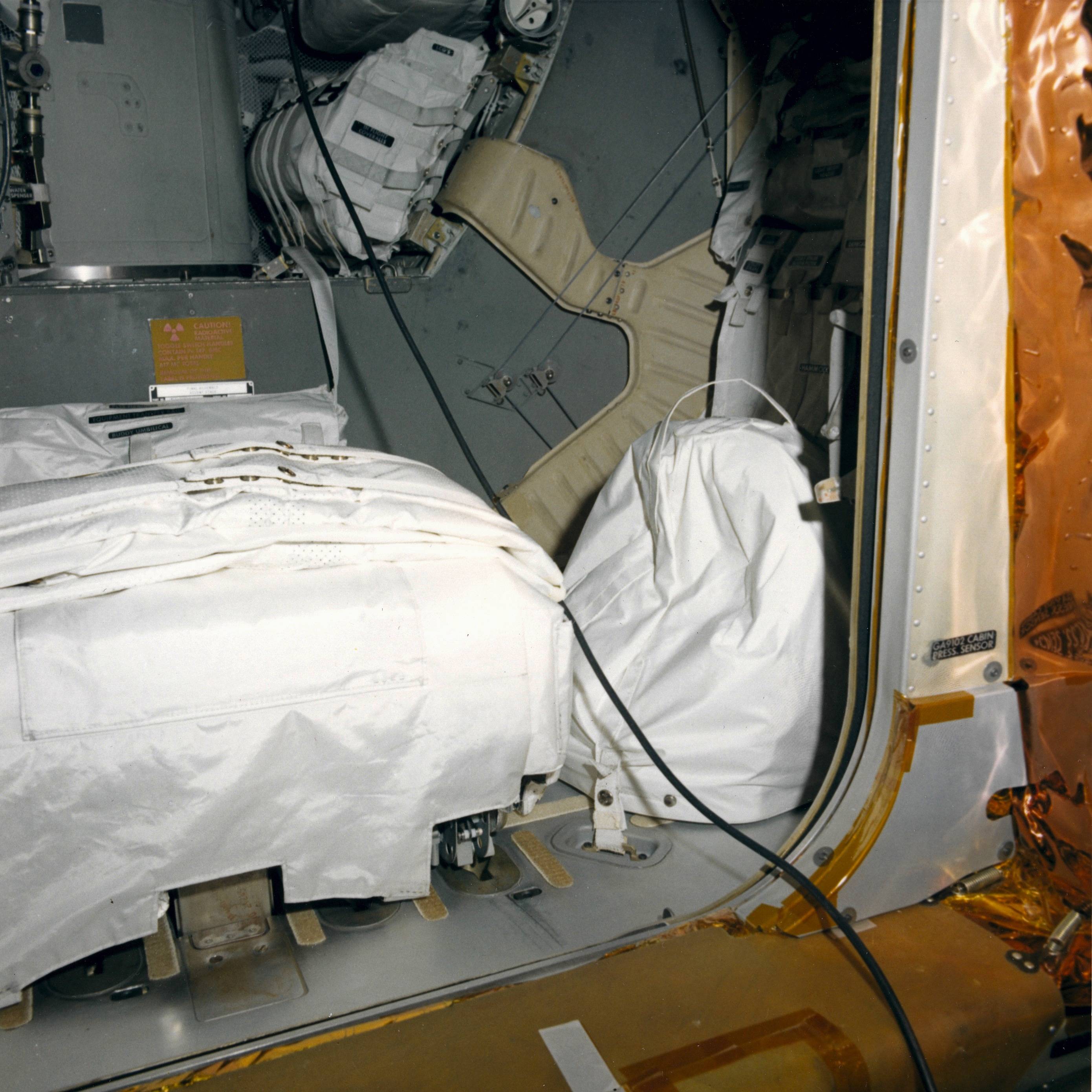 Conversation describing the dust after EVA: Apollo 11 - Trying to Rest

"[Armstrong, from the 1969 Technical Debrief - "We cleaned up the cockpit and got things pretty well in shape. This took us a while, and we planned to sleep with our helmets and gloves on for a couple of reasons. One is that it's a lot quieter with your helmets and gloves on, and then we wouldn't have any mental concern about the ECS and so on having two loops working for us there."]

[Aldrin, from the 1969 Technical Debrief - "We wouldn't be breathing all that dust."]

[Armstrong, from the 1969 Technical Debrief - "That was another concern. Our cockpit was so dirty with soot, that we thought the suit loop (filtered oxygen going directly from the ECS to the suit and then back again) would be a lot cleaner."]

[Aldrin, from the 1969 Technical Debrief - "I guess the question is: can you keep it cleaner? I guess you could keep it a little cleaner, but there are so many things going in and out that it's almost impossible to avoid getting a significant amount of lunar material in there."]

[The Apollo 12 crew had an even worse problem with dust and, for the remaining missions, the solutions that seemed to help were (1) dusting each other off as thoroughly as possible with a house-paint-sized brush before going up the ladder; (2) stomping their feet on the ladder to get more dust off the boots and lower legs; and (3) putting the suit legs into spare jettison bags between the EVAs.]

[Armstrong, from the 1969 Technical Debrief - "A couple of comments with respect to going to sleep in the LM. One is that it's noisy; and two is that it's illuminated. We had the window shades up (that is, covering the windows) and light came through those window shades like crazy. They're like (photographic) negatives and a lot of light will shine through."]"

170:49:34 Cernan: I have never seen so much dirt and dust in my whole life. Ever. (Pause) Ron's not going to be able to see through either one of these helmet visors. (Laughs) Yes, he will.

s-m-e: "The one thing I really wanted to see never showed up: Just one close-up photo of the floor of the LM or its hatch after EVA, no matter how bad, blurred or fuzzy it was." ... "Besides, by any chance, how did the hatch and its sealing look like? I'd figure all of it was all pretty dusty ...". 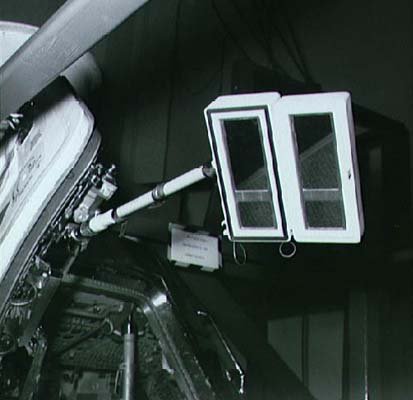 "... During the Apollo 16 extravehicular activity, the Microbial Ecology Evaluation Device (MEED) was removed from its protective stowage bag in the crew compartment. A 2.54 meter (8 foot 4 inch) tether was attached externally to the MEED flight assembly, the assembly was mounted on the campole, and the hardware was secured to the inside of the spacecraft. The campole and MEED assembly were then installed into a fitting mounted on the opened hatch door of the command module (CM). A small attitude adjustment of the CM was required to place the appropriate surfaces of the opened MEED assembly directly perpendicular to the rays of the sun.".

Purported to be a photo of the Apollo 13 LM hatch, seal, and floor.

Photo from uncertain source #1 and #2: 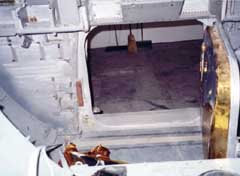 Text associated with the photo:

[Google Translate]: "Why should not they get through this? It's just the link between LEM and CM, and they did not shoot Ferreri's "The Big Food" on the moon flight:".

I will return to add more.

Not the answer you're looking for? Browse other questions tagged the-moon apollo-program lunar-landing lander dust or ask your own question.

25
How was dust-mitigation addressed during the Apollo program?
4
Lunar rover footage?
7
How were the “dust recepticles” installed on the Apollo 17 LM floor?

25
How was dust-mitigation addressed during the Apollo program?
22
How did the Apollo astronauts train for the 1/6G lunar landing?
6
What would happen if the SPS did not fire on Apollo 8?
29
What did the sky actually look like from the Moon?
19
Did any of the Apollo lunar modules land significantly off level?
19
How did Apollo-12 manage to land next to Surveyor-3? First “Space-Tourists”?
5
Apollo Command Module's impact attenuation system, what did the inner part look like?
5
How soon after “The Eagle” landed did they first attempt to bounce a laser off the Moon? When did it first succeed?
4
What did the Apollo 12 multispectral Four-Camera system look like?
3
Why did the Apollo lunar suits have two visors?