Can we expect to find pure iron or only nickel-iron alloys in asteroids?

asteroid meteorites
Share
Improve this question
asked May 18 '18 at 2:54

Finding macroscopic (i.e., big enough to actually use) pure-iron meteoroids appears to be extremely low-probability. Certainly the bulk composition of the metals in Earth (good references here, here, and here) and metallic meteorites is iron plus nickel, a siderophile, and a few also-rans, like sulfur and oxygen, and other siderophile metals like cobalt.

Pechersky et al indeed documented cases of nearly-pure iron crystals or quasi-spherical nodules in meteorites, but these have dimensions in microns (10-50 microns) and are embedded in the much more common taenite or kamecite, or occasionally schreibersite (an iron-nickel phosphide). I can't imagine that sorting through a crushed sample, looking for microscopic grains of not-quite-pure iron, is any less cumbersome than electrochemical smelting of taenite or kamecite, and the yield (iron produced per ton of ore processed) of the smelting would be much greater.

Supernova explosions and white dwarf explosions spew large amounts of both iron and nickel into the interstellar medium, and these go on into the next generation of stars and the planets that form with them. Much of the iron comes from the decay of unstable nickel nuclei generated directly in the explosion, so they are tightly associated. Since nickel is a siderophile, when they are melted during incorporation into a planetary body and subsequent differentiation the nickel essentially dissolves into the iron and the two sink together into the core. Even if pure-iron meteoroids did exist (almost certainly tiny! dust from supernova explosions and such!), when they are incorporated into a planetary body and they sink to the core they become just another part of the iron-nickel solid solution in the core melt.

According to Pechersky et al the production of the nearly-pure iron nodules might be a process that occurs as the melt is initially solidifying, or it might occur after parent body disruption, as the original minerals decompose from the iron-nickel solid solution.

Between the orbit of Mars and Jupiter, you can find the Asteroid Belt. The total mass of all of the asteroids is about 4% that of the Moon. About 10% of the mass is thought to be M-type (metal-rich) asteroids.

Some of the asteroids like 16 Psyche are made up of mostly metals like iron and nickel. NASA is planning a mission, Psyche to explore this minor planet in 2022, which arrives in 2026. After this, we would have a better idea of the viability of using an asteroid as a source for construction material.

I have very good information for you!

I confirm that there is pure iron in space because I have a 99% iron meteorite. 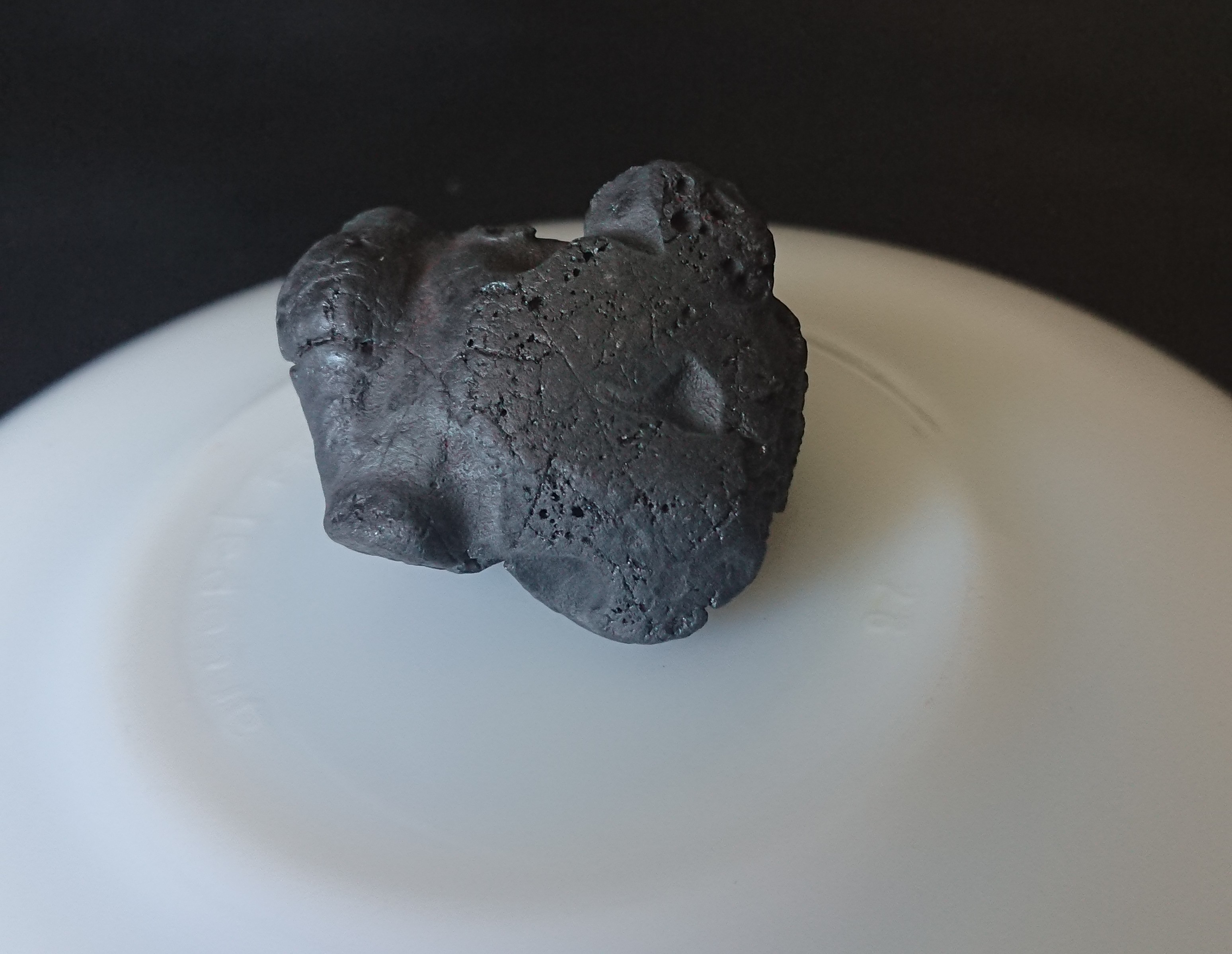 This samples weight 42,38g, and the fusion crust is no longer visible because I have several acid tests, before knowing that it should be kept.

This is the certificate of analysis.

Two samples contain more than 99% of iron, with small amounts of manganese and cobalt. 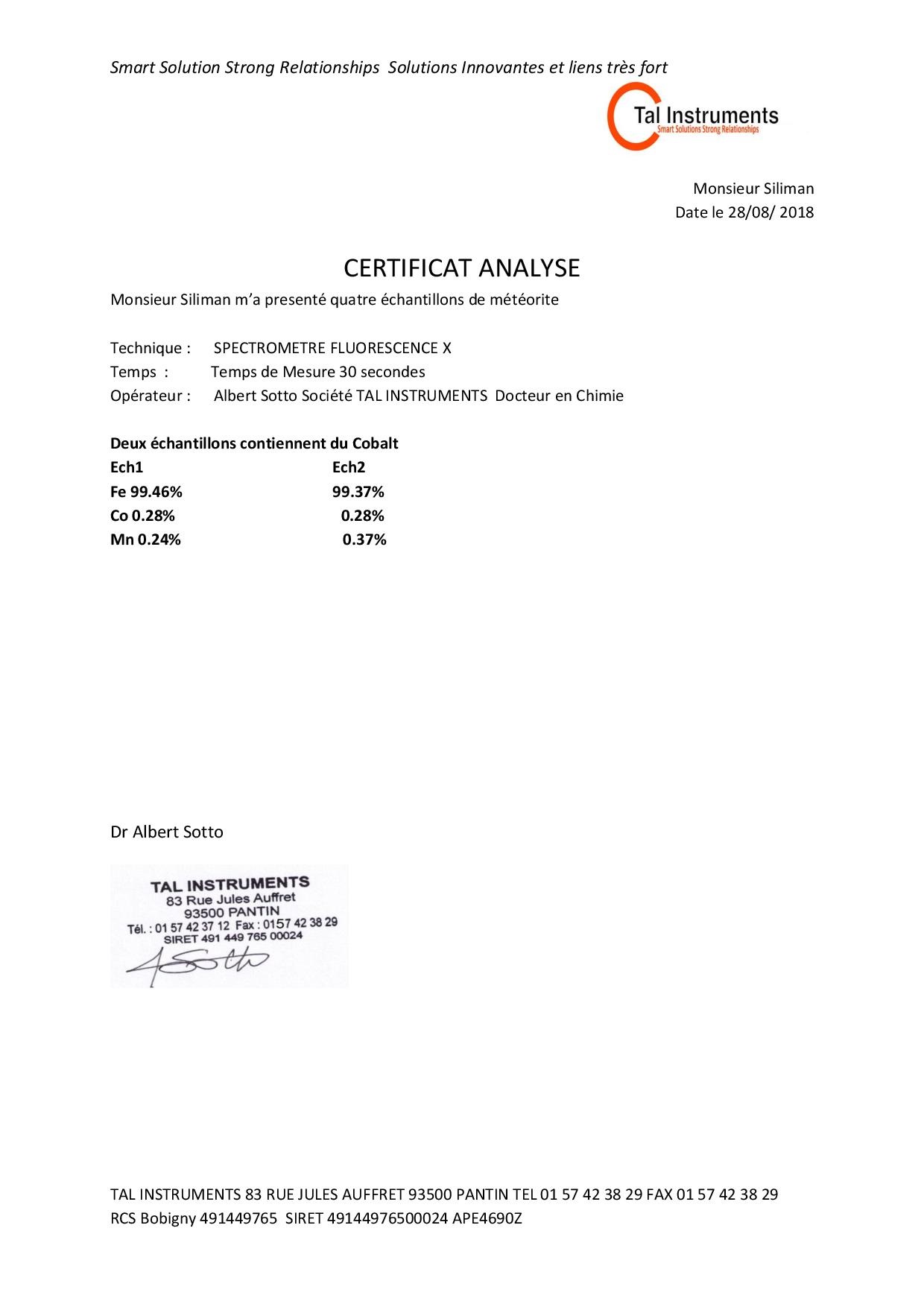 Not the answer you're looking for? Browse other questions tagged asteroid meteorites or ask your own question.

8
Can one put a large nickel-iron asteroid into an elliptical solar orbit that results in a soft(ish) earth landing?
2
How can one spacecraft (MANTIS) fly by multiple (7) asteroids?
4
Is delay-doppler radar imaging of NEO asteroids possible only if it spins fast enough?
2
Can small asteroids in the asteroid belt be detected on the fly and how much of a threat do they represent for a human manned space mission there?