What does the ISS ground track look like during periods of high solar beta?

These tweets about how sometimes the sun doesn't set on the International Space Station for multiple days made me realize I still have trouble visualizing solar beta angles.

Does anyone have a projection of the ISS ground track, with the shadowed/unshadowed bits of Earth, during a high beta angle time? Or perhaps an animation?

The tweets in question:

Another interesting similarity between life on a space station and life in Antarctica (often used as an analog for reasons of isolation and confinement): sometimes the sun doesn't set.

A couple of times a year our orbit line precesses to align with the solar terminator. When that happens, the sun appears off our port or starboard side and never sets. This lasts for 3-4 days and puts significant thermal stress on the spacecraft (constant heat or constant cold).

I haven't found a way to make Heavens-above draw satellite orbit images for other time periods. (It will easily draw start chart pass information for them)

But APEX right now is in an orbit with a very high beta angle. So the images for its orbit should be useful. 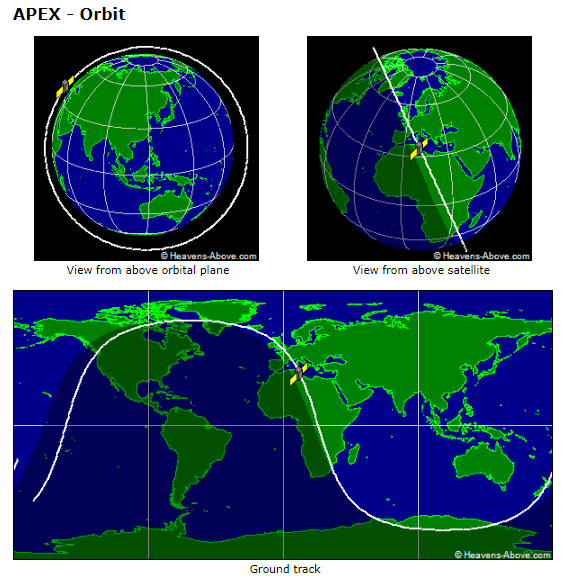 The "View from above satellite" is a nice image. If we imagine that the view is from some observer on a distant star, the observer would see:

The ISS precession is around the earth's N-S axis, while the sun/terminator move along the ecliptic. So the two don't line up exactly every period. With the ISS inclination to the earth's axis at a constant 51.6 degrees and the sun's maximum inclination to the axis of 23.4 degrees, the maximum beta angle between the sun and the ISS is 75 degrees. At the current orbit altitude, that's just enough for it to keep a glimpse of the sun.

Not the answer you're looking for? Browse other questions tagged ground-track or ask your own question.