How much does pressure on Mars change with weather?

A great answer about the Mars atmosphere and water triple point shows there is a region on Mars where clean liquid water slightly above 0°C can exist on the surface. I still wonder, though, how permanent these conditions are.

On Earth, the record recorded pressures adjusted for sea level were low: 858hPa and high: 1084.8 hPa.src That's quite a range; especially the low, about 15% lower than average! I wonder, how that looks on Mars. Does the pressure at Hellas Planitia ever drop below 611.2Pa?

Publications with atmospheric pressure data on Mars are rather scarce.

This publication about seasonal cycles at Gale Crater shows the chart below with the atmospheric pressure ranges near the landing site of the Mars rover Curiosity. 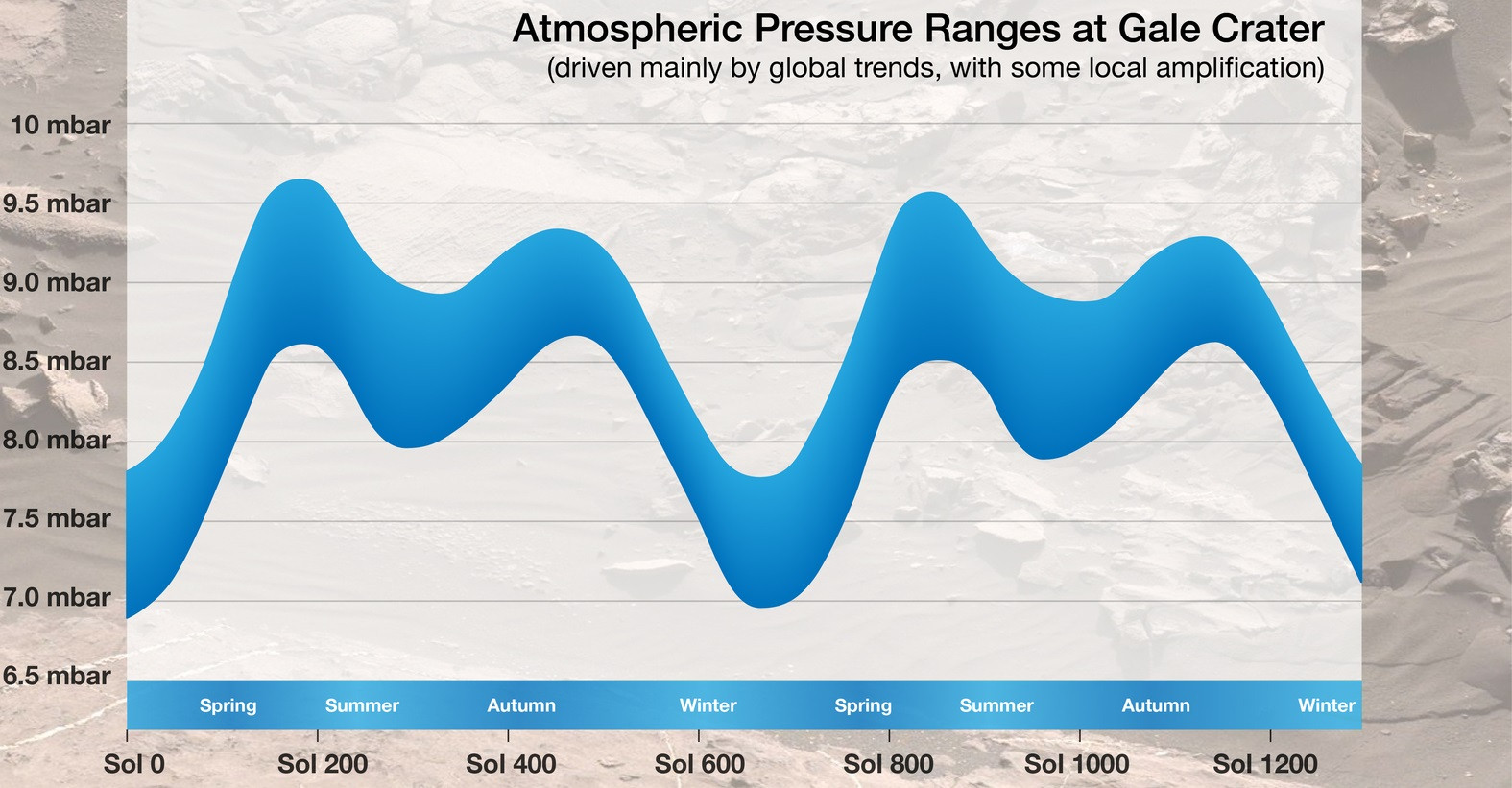 The width of the band is an indication of how the pressure varies throughout each sol. The seasonal ups and downs show a known global pattern on Mars that illustrates another way the Red Planet differs from Earth. Most of the thin Martian atmosphere is carbon dioxide. Some of the carbon dioxide freezes out of the atmosphere into seasonal polar caps of carbon-dioxide ice. The biggest dips in the blue band are in the long southern-hemisphere winters - the result of carbon dioxide temporarily shifting out of the atmosphere into Mars' south polar ice cap. The dip in southern summer, less dramatic, results from carbon dioxide being captured temporarily into the less-massive north polar ice cap.

From the image above we can see that the pressure varies between about 6.9 and 9.7 millibars at Gale Crater, the difference between highest and lowest is thus 29% of the highest value.

This paper about the Viking mission mentions that the mean daily pressure observed by the Viking Lander 1 was as low as 6.8 millibars, at other times of the year it was as high as 9.0 millibars.
Here the difference between highest and lowest is thus almost 25% of the highest value.

The pressures at the Viking Lander 2 site were as low as 7.3 millibars and as high as 10.8 millibars, giving even a difference of almost 33% of the highest value !

And because so far cyclones at Hellas Planitia have never been recorded, we don't have to expect low pressure eyes.

Not the answer you're looking for? Browse other questions tagged mars atmosphere water weather pressure or ask your own question.

11
Will uncovering the ice deposit in Utopia Planitia improve the climate on Mars?
10
Is there any reason Cyanobacteria or Lichens can't survive on Mars?
4
How are martian dust devil maps made?
3
Would snow fall on the surface of Mars because of uncovering the ice deposit in Utopia Planitia?
6
How were Mars' zero elevation datum defined? What are their shapes?
5
Choosing a specific region to live on Mars, how important will the degree of dust there be, compared with the availability of water?
10
Feasibility of Liquid Water at Bottom of Valles Marieneris