Are there sufficient resources, specifically fuel and water, to allow this dwarf planet to be a feasible location for a self sustained colony? 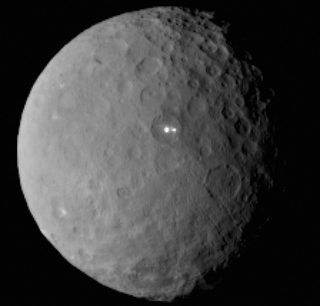 This answer is outdated. The Dawn flyby in February 2015 added a lot of information which was not known at the writing of this answer.

We don't actually know much about Ceres. All we know about it is from earth-based or earth-orbit-based observation. Until now it wasn't visited by a probe, but the Dawn spacecraft will do so in February 2015. This will likely give us much more insight into its composition.

What we do know, is that Ceres is quite small. Its mass is estimated to be only about 1.3% of that of the Moon. Its surface gravity is estimated to be only $0.27 m/s^2$. A low surface gravity makes colonization harder because astronauts will suffer almost as much from muscle atrophy, osteoporosis and other health problems like they do in microgravity in low earth orbit. But when it comes to researching and/or exploiting nearby asteroids, low gravity makes things easier, because this means it wouldn't require much energy to escape its gravity well and perform a landing.

Ceres surface seems to contain ice. At least that's what it's infrared signature implies. Ice can potentially be melted and filtered into drinking-water, or split into oxygen for breathing and hydrogen for generating energy from nuclear fusion (which is still science fiction, but so is asteroid mining and space colonization). Another application of hydrogen and oxygen is that it can be liquidized and used as bipropellant for liquid-fuel rockets. That's an important plus-point for exploration. The surface also seems to contain some iron-rich minerals which could potentially be suitable for creating building material for habitats or maybe even space vessels, but that's hard to tell without an actual soil sample.

Ceres seems to be quite warm for an object so far away from the sun. Its maximum temparature seems to be about -38° C. It also rotates quite fast (rotation period of 9 hours) which meanst that the temperature differences on the surface won't be very large. This is also not that bad of a thing.

But in the end Ceres doesn't seem to be much more or less of a candidate for colonization than other large ice-asteroids. But maybe Dawn will tell us more.

Planetary chauvinists like to point out mass of the Main Belt is small compared to Earth or Mars. But most of a planet's mass is inaccessible. As we burrow down, pressure and temperature increases. Only a thin shell of a planet's surface mass can be reached. A planet's potential real estate and resources are better gauged by surface area than volume.

Moreover, the entire volume of an asteroid is accessible.

If my arithmetic's correct, the pressure of Ceres' center is about the same as the rock 2.7 km below earth's surface, about 1400 atmospheres. And the South African TauTona mine goes as deep as 3.9 km underground. Thus it's possible to tunnel clear through Ceres. Of course the volume of smaller asteroids would be even more accessible.

Planetary chauvinists like to say planets can be terraformed. They like to imagine Martians walking in shirt sleeves under the Martian sky, breathing Martian air. In my opinion terraforming is impractical and a waste of resources. I believe living places beyond earth will be wholly enclosed, artificial environments. This will be true regardless whether the habs are asteroidal, lunar or martian.

Another argument for planets is the need for gravity to stay healthy. In spinning habs, inertia in a rotating frame (aka centrifugal force) can provide acceleration to prevent bone and muscle atrophy as well as drain sinuses, enable flush toilets, showers etc.

The asteroids' very shallow gravity wells make beanstalks (aka Clarke Towers) more doable. If the asteroid has a healthy angular velocity $\omega$, even more so. Ceres' sidereal day is about 9 hours, an $\omega$ more than double, almost triple that of Mars and Earth. A Ceres beanstalk could be as short as 706 kilometers and taper ratio using an ordinary substance like Kevlar would only be 1.02. A far, far less challenging project than an earth or even a Mars elevator. A Vesta elevator could be as short as 265 kilometers with a Kevlar taper ratio of 1.01. I believe asteroidal elevators could greatly reduce reaction mass needed for delta V. Thus the mass fractions mandated by Tsiolkovky's rocket equation become less of a challenge. Travel throughout the main belt could be less of a problem than travel between planets.

So my answer is yes. Yes, colonizing Ceres is feasible. As well as colonizing much of the Main Belt.

There is enough water ice on Ceres. Regarding fuel, what do you mean? One can produce fuel on its surface from water by separating it into oxygen and hydrogen, but this needs energy. And the only energy source there is solar power.

From a strictly physical point of view, yes, we could colonize Ceres. Why would we want to? Colonizing any object in space is more of an economics and political issue than a material or physical issue. Human missions to Ceres will cost billions of dollars and there needs to be a justification for it that is acceptable to the prevailing culture. And cultures change. What would motivate the general public or private investors to colonize any place, on Earth or in space? Answer that question and you will see the future of Ceres - or not.

Yes to water for Ceres, no to fuel. If you go to a "colonization WIKI" on colonizing Ceres, you'll see not only that there is significant amount of water in the form of ice on Ceres, but that favorable trajectories to Ceres from Earth actually occur more frequently than to Mars. Also, less delta-V required than to Mars, given Ceres' lower gravity. There's talk that other main best asteroids with significant water are just as good as Ceres, but I don't think we actually know of others, and certainly Ceres, being the largest main best asteroid, naturally has more water than any other asteroid in the belt.

As to fuel, we have to stop talking about using off-Earth water for fuel. This is as insanely shortsighted as the original Easter Islanders chopping down all the trees.

26
Could a Human reach escape velocity by jumping from the surface of Ceres (a dwarf planet)?
18
Why explore Ceres?

33
Would colonising Antarctica be a good test for colonising Mars?
18
Why explore Ceres?
5
Those bright spots on Ceres — are scientists still "scratching their heads"?
3
Manned exploration or Colonization of Ceres -- Any studies
7
Terraform via moving Ceres To Mars orbit, using ion drive
4
Asteroid Mining on Ceres
3
What is the correct rough estimation for the payload to kick-off a sustainable Mars colony?
9
Accurate map of Ceres