There are some photos of the Apollo Lunar Module ascent engine, see 1, 2, 3. The nozzle looks like being made of epoxy and fiberglass. The fibers are wound in two different directions.

Is it true or something different material?

propulsion apollo-program engines
Share
Improve this question
asked May 27 '18 at 20:59

I've confirmed that it was made of "plastic" but not what type yet.

This schematic confirms that the "structural filament winding" mentioned above was fiberglass. 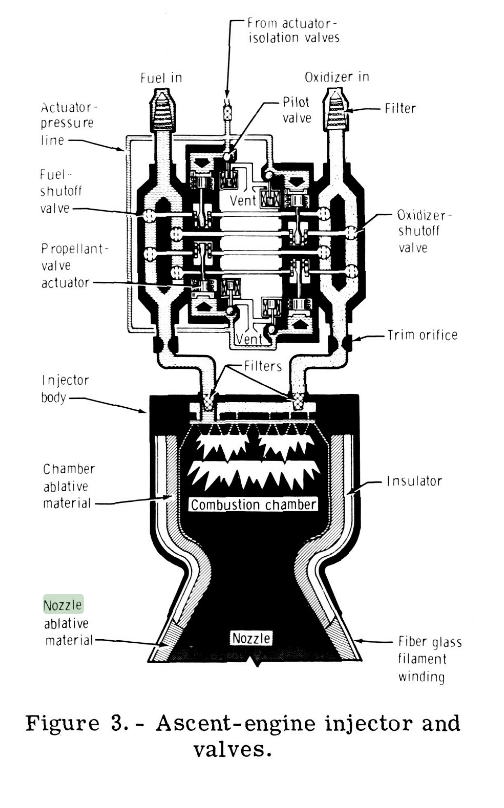 Not the answer you're looking for? Browse other questions tagged propulsion apollo-program engines or ask your own question.

10
Why could the Lunar Ascent Engine be used only once?
5
How can phenolic (resin?) handle rocket engine nozzle temperatures?

37
Why does the ascent stage of Apollo 11's lunar module look like it's made of paper?
18
How did astronauts traverse from module to module in the Apollo craft?
36
How did the Apollo 11's Eagle ascent stage find the CSM after leaving the Moon?
13
What were the differences on the LM ascent stage engines on Apollo 9, 10, and 11?
12
What did Apollo need the crewed Command Module for?
19
What was the reason to use different fuel for the Apollo Service Module propulsion system and reaction control system?
5
Launch window for the Apollo Lunar Module?
10
Why could the Lunar Ascent Engine be used only once?
5
How many different kinds of insulation film are wrapped around the Apollo Lunar Module?
4
Who are these people inside Apollo Command Module (presumably posing for advertisement photoshoot)?