What are these circular structures around the rocket?

Edit 31 May: Too bad they have changed the content of the video (and still call it 'live'), so that you can no longer see the entire launch phase. You can still see that in this video showing the entire launch.

There's one ring visible at the top of the rocket after 1:30 minutes into the launch and it seems to emit light:

Shortly after 1:50 into the flight, you see 3 more 'rings' developing: 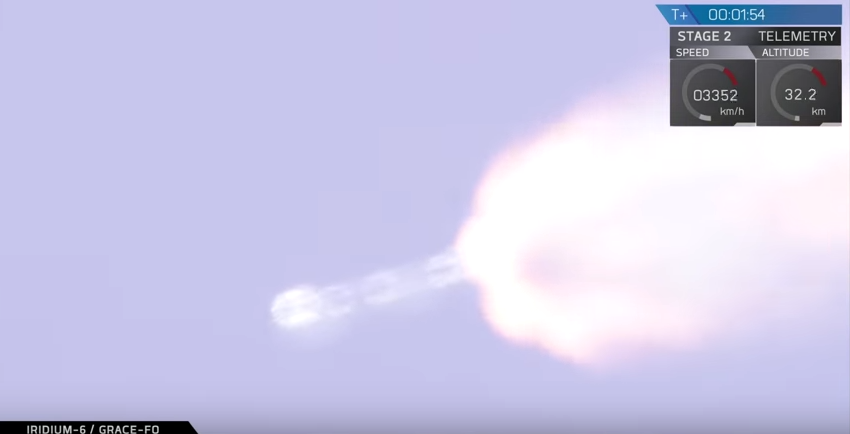 They must be some sort of bow waves/shock waves. But:

This donut shaped ring is the typical bokeh of a mirror lens. Evidently, the tracking camera was failing to achieve good focus nearly all the time. Unfocused point of light (e.g. specular reflection from the sun) gets the shape of the camera aperture, which is donut, because of the secondary mirror obstruction (distorted further by the atmospheric turbulence). 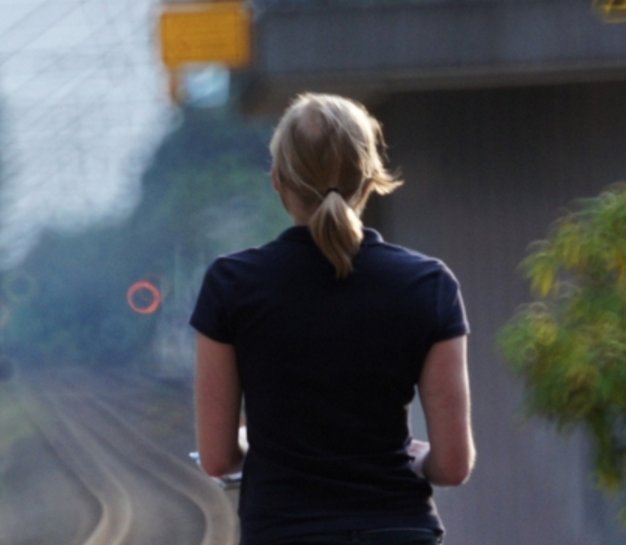 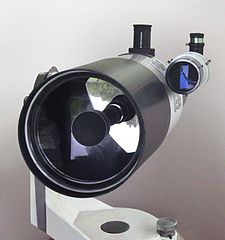 I think we don't need sonic boom condensation to explain it. If you look at photos, for example here https://spaceflightnow.com/2018/05/24/photos-blues-skies-make-for-spectacular-falcon-9-launch-in-california/

it can be seen that the rocket have white and dark parts:

4.Some darker lower part of first stage because of soot from previous flight (this first stage was used to launch Zuma payload on Jan. 7 2018)

why 5th lowest white area occurs? At photos we see also landing legs, and they are white. So I think at second picture the leg is just more prominent, due to changed lighting conditions (different sun-rocket-camera angle, plus maybe the rocket have rotated)

P.S. I watched all Falcon 9 launches, but never noticed any sonic boom effect. Did anybody?

The likely explanation here is sonic booms. For the most part, everyone knows that passing mach 1 creates a sonic boom. Doing some research, it seems that there are specific angles and thus specific surfaces on a craft that result in a sonic boom rather than the entire craft. Due to the complexities of fluid mechanics around the spacecraft, it is not unlikely to believe there are several surfaces for which the entire craft has to hit speeds above mach 1 to result in a boom. When a boom is created, an extreme compression wave moves outwards causing the water vapor in the air to condense in a similar fashion to cloud formation to my understanding. This would reflect light and due to the thin nature of the cloud produced, appear to give off light. As for the ring shape, this would just be due to the cylindrical shape of the faster moving air shroud around the craft forcing the brief instance of a boom formed cloud into a circular shape.

Edit: As many have mentioned, this is probably not correct, but I will leave it just in case it's helpful to the discussion.

18
What's the largest aperture telescope sent beyond the Earth-Moon system?
5
Got Milk? Why is the term "colloid" used in "Colloid or Electrospray thruster"?

3
Is the LC-40 SpaceX Transport/Erector updated for Falcon Heavy already?
10
What is the cause of the blue light from LH2/LOX rocket engines?
16
Was SpaceX's launch of Formosat-5 more vertical than normal for any particular reason?
10
Deploying multiple satellites from one second stage
8
Why did this fairing separation happen at such a high altitude? (SpaceX Iridium-6/GRACE-FO)
5
Efficiency and timing of the Iridium-6/GRACE-FO low-power burn and coast phase?
7
How does SpaceX decide which half of the Falcon 9 fairing to catch?
2
What is producing these strange lights around the Falcon 9 grid fins (Starlink launch)?
4
What are these cartridges with holes on the Dragon trunk?
5
What is this black smoke coming from an all solid fueled Epsilon rocket?