What kind of power is referred to in "the...most powerful all-electric propulsion communications satellite ever produced"

The Florida Today article On second flight, SpaceX Falcon 9 rocket to launch 'brute' of a satellite from Cape describes the upcoming SpaceX launch of SES-12. Next to this tiny image of (presumably) SES-12 is the caption: 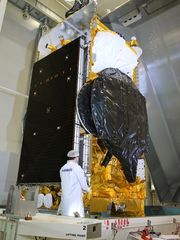 SES-12 is the largest and most powerful all-electric propulsion communications satellite ever produced, according to manufacturer Airbus Defense and Space. The satellite's launch from Cape Canaveral on a SpaceX Falcon 9 rocket is targeted for 12:29 a.m. Friday, June 1.

The main text of the article also says:

According to Airbus, the satellite is the biggest and most powerful yet to rely entirely on electric propulsion to reach and hold its final orbit high over the equator.

Question: Are they talking about the power output of the solar array, or total RF power transmitted, or power used for the all-electric propulsion, or even the total thrust available ("powerful thrusters")?

Related (though not all-electric propulsion): ViaSat's 18 kW solar array - largest ever for a commercial telecom satellite?

Browse other questions tagged spacex communication-satellite power ses or ask your own question.

8
What will be "unique" about upcoming SES-9 GTO transfer profile by SpaceX?
4
How did SES-9 reach geostationary orbit from inclined transfer orbit (from F9 2nd stage)
7
How much time does it take to circularize a GTO orbit using ion propulsion?
25
SpaceX's 4,425 satellite constellation - what's the method to the madness?
5
What does SpaceX do with all the engines?
2
Why is SES-12 "...basically two satellites in one...”?
4
Reuse statistics of SpaceX Dragon capsules?
4
What is meant by "a high-energy geostationary orbit"? (SpaceX Arabsat 6A)
20
Why will Starlink satellites use krypton instead of xenon for electric propulsion?
4
Shortest ever F9 2nd stage burn for the largest ever F9 payload? (Starlink Mission's SES-2 burn time of 3 seconds)