Methane on Mars - Can we locate the source?

I know that Methane has been detected on Mars, however there seems to be a lack of specific information about the location and concentration of the Methane. Would it be possible to pinpoint the source of the Methane with current technology (E.G. Mass Spectrometers) or is it spread enough by Martian winds to not be detectable in any specified above-average concentration? Do we simply not have the coverage using the rover? What would be an example of a previous mission where we found an unexpected gas - has there been one and what did we do?

I have since done more research and have found the following information regarding the sample analysis on Mars I have yet to analyze the sources provided on the page, but I am in the process of reading into each of the listed sources. Attached below is a Mass Spectrometer reading of the methane found on mars from 2012 to 2014: (the Mass Spectrometer did not measured a single molecule of methane, the reported readings are from TSL, a laser Spectrometer, not a mass spectrometer) 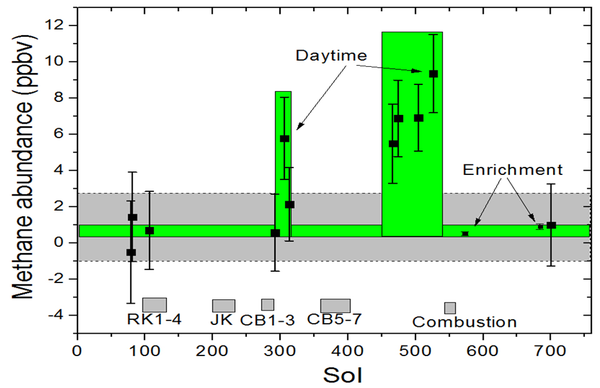 Something that is notably lacking is the positions of the measurements as far as I could tell (I could be entirely wrong because my understanding of this graph is low) "Sol" (the number of days elapsed on Mars) can be used to estimate position (does anyone have this conversion of the graph?). Is there a utility that tracks Curiosity online in terms of "Sol" instead of days or an easy equation and resource that paths in days? I'm sure it's just a ratio. However, I also found this picture on the same page, stating the "theories for the Methane" but not actual scientific evidence.

Once again, still verifying sources, but this may jumpstart the answers. Please be harsh on correcting me if I use invalid diction or anything that is not relevant/scientifically accurate. I'm trying to learn as much as I can, and will take offense to nothing.

Yes. The purpose of ESA's ExoMars Trace Gas Orbiter mission is to locate the sources of trace gases, including methane:

The spacecraft arrived at Mars in 2016, and spent until early 2018 aerobraking into their preferred orbit. Hopefully they will begin reporting results sometime soon.

Do we simply not have the coverage using the rover?

Rovers can only measure data at their location. Determining even an approximate source will require much wider geographic coverage.

The Trace Gas Orbiter carries a scientific payload capable of addressing this scientific question, namely the detection and characterisation of trace gases in the Martian atmosphere. From its approximately 400-km-altitude science orbit, the instruments onboard the Trace Gas Orbiter will be deployed to detect a wide range of atmospheric trace gases (such as methane, water vapour, nitrogen oxides, acetylene), with an improved accuracy of three orders of magnitude compared to previous measurements.

The Trace Gas Orbiter will monitor seasonal changes in the atmosphere’s composition and temperature in order to create and refine detailed atmospheric models. Its instruments will also map the subsurface hydrogen to a depth of a metre, with improved spatial resolution compared with previous measurements. This could reveal deposits of water-ice hidden just below the surface, which, along with locations identified as sources of the trace gases, could influence the choice of landing sites of future missions.

Not the answer you're looking for? Browse other questions tagged mars curiosity methane or ask your own question.

18
Why did the Earth based observations of methane on Mars go wrong?
3
NASA's Curiosity Rover - Carbon Isotope Ratio of Methane?

18
Why did the Earth based observations of methane on Mars go wrong?
59
Curiosity: Why did they "reinvent the wheel" instead of using pressure tires?
4
Methane and the Search for Life on Mars
6
How will Robotic Refueling Mission-3's liquid methane tank remain full for six months without any boil off?
4
Will the Mars 2020 rover's sensitivity to methane be better than Curiosity's?
3
What new has come from the recent methane findings on Mars?
35
Is it possible that Curiosity Rover measured its own methane or failed doing the spectrometry?
3
In their first 100 sols which NASA Mars rover drove the furthest and which one the least?
8
Why is there a black donut in Perseverance's SkyCam? Is it always used to block the Sun? (sky cameras on Earth don't) How does it work?
7
Could and should not the search for the location(s) of the Martian methane spikes become the main scientific objective for the Curiosity rover?