In watching some YouTube videos of US Space Shuttle launches, I was wondering how close personnel were to the actual launch pad during a launch that weren't actually on the Shuttle itself? Obviously there were many civilian observers at various places a few miles away, and as close as the VAB and attached mission control center where the launch was coordinated and controlled from. However, were the safety (or other) personnel stationed significantly closer to the launch pads, whether in open vehicles, in bunkers, or other protected locations?

This question is specifically in regards to the US Space Shuttle program, but could be extended to Saturn V or other US launches if there are anecdotes or other information about other US rocket launches that people wish to share.

The closest personnel were the fire/rescue teams stationed in the M113 vehicles, approximately one mile from the pad.

Three are on hand on launch day. Two stand by less than a mile from the launch pad, each with a complement of firefighters on board. A few minutes before liftoff, the firefighters get inside wearing all their gear, including silver protection suits, an airpack and an air mask. They close all the hatches and raise the back ramp.

The inside of the M113 is hardly spacious, so the firefighters have to curl their legs up tight. Only the driver can see out consistently, looking through four slits facing the pad. The others in the vehicle have to take turns looking through the slits in another hatch, but that means awkwardly trying to kneel or stand in the middle of the rest of the crew.

Most of the firefighters feel the launch more than see it because the thunder thoroughly shakes the 10-ton armored personnel carrier.

If an emergency call comes in before launch, the driver runs in and gets the vehicle moving in seconds, letting one of the other crew members work the lever to lift the ramp

Here's an official NASA photo of the M113 in use during training, with astronaut Dan Barry, cosmonaut Mikhail Tyurin, and some lowly support person. 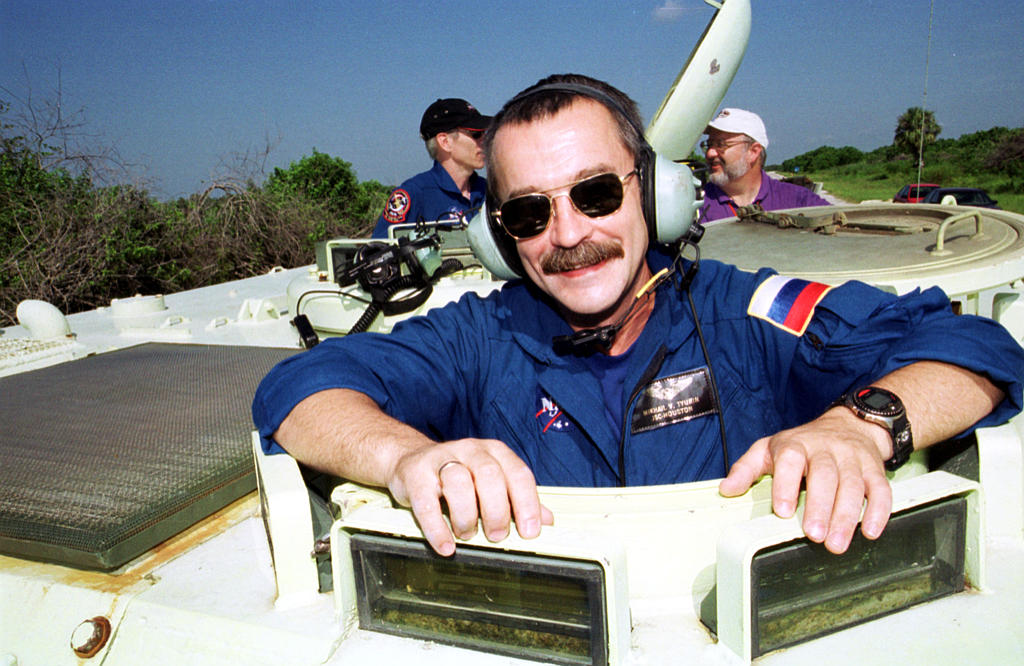 9
Will the NASA Commercial Crew "zip line away from the tower and into" this "military armoured truck" in case of emergency? Does the truck have a name?
5
Slide rope way from launch pad of space shuttle?
8
During the launch of a rocket, how close are the nearest humans?