What is the science behind the variation of Mars' effective sky temperature with latitude and longitude? Why the "hot spot"?

After reading this interesting answer to How cold is the Martian sky at night? Or the day for that matter? I found that Mars Global Reference Atmospheric Model 2001 Version (Mars-GRAM 2001): Users Guide contains a section on this and Figure 4.4 even shows a plot of "...longwave irradiance at the surface, expressed as sky temperature...":

Question: What is the science behind the variation of effective sky temperature with latitude and longitude? Why is there a "hot spot" near 160W, 30S?

The plot is for Ls = 270. Does this mean that for each point on the map, the sky temperature is calculated at about 6 hours before local noon? Or that local noon is at 270 degrees longitude? 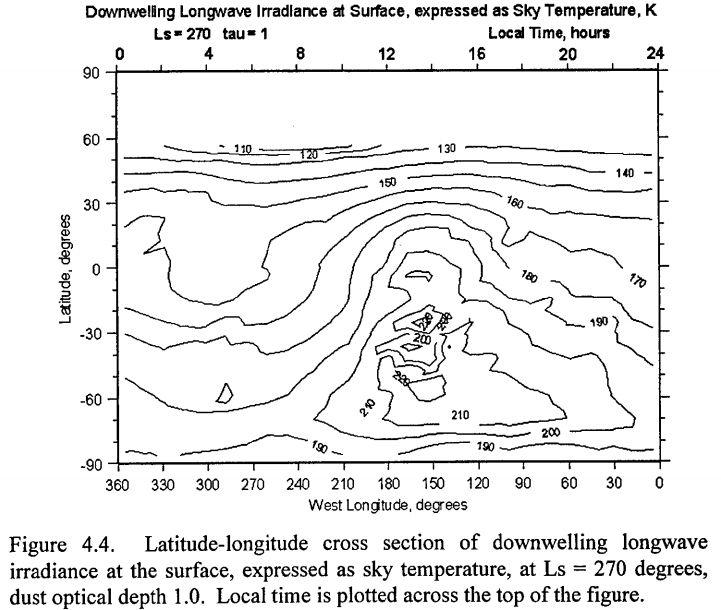 Latitude-longitude cross section of downwelling longwave irradiance at the surface, expressed as sky temperature, at Lsun = 270 degrees, dust optical depth 1.0. Local time is plotted across the top of the figure.

The term "Ls" (solar longitude) is used to describe the seasons on Mars. Ls = 90 is summer solstice, Ls = 270 is the Northern winter solstice. This means the axis of Mars at the time the "image" was taken is tilted by -25° with respect to the Sun.

The whole plot is shown as if it was taken in a single instance, i.e. each longitude was mapped at a different time of day - the local time is shown on the top axis.

Looking at the position of the hot spot, it is in the place where we would expect it: It's shortly after noon, i.e. around 14:00 local time, and it's at a latitude that had the Sun directly in zenith during noon, that is at 25° southern latitude.

As the paper states

Fig. 4.4 shows a significant degree of correlation between $T_{sky}$ and ground surface temperature.

So there is nothing actually unexpected to be found: The hot spot is in a place that had the highest amount of solar radiation influx during the day, and the air temperature behaves the same way as the surface temperature.

Please note that the value shown here is not the actual temperature of air - it shows the amount of radiation going downwards through the atmosphere from above. It is just shown as an effective temperature to avoid having to deal with units like W/m²/sr. This also explains why there is no value for latitudes above 60° - there is just no solar radiation there during the winters night.

Not the answer you're looking for? Browse other questions tagged mars atmosphere or ask your own question.

13
How cold is the Martian sky at night? Or the day for that matter?
2
Does Venus have a north star or south star?
4
Just how preferable are afternoons for flying Ingenuity? Why?
2
Why is it so cold in the nighttime (-130 C at 25.1 degree North) at the location where the Chinese rover landed on Mars?

10
What is the science behind the canals of Mars?
3
What is the Mars "network science mission" referred to in NASA's Mars Design Reference Architecture?
4
What would a Venus sky look like above the cloud tops night and day?
8
Why would Mars' sky appear blue at dawn and dusk, but red during the middle of the day (reverse of Earth)?
10
Is there really a frozen lake near the equator on Mars?
2
What are the temperature and pressure inside the CO$_2$ deposit on Mars?
7
Why didn't NASA use the "Sky Crane" method for landing the InSight mission on Mars?
1
Could one use an adjusted idealized greenhouse model to calculate the local average temperature on Mars?
5
Why did NASA intentionally crash-land the Curiosity and Perseverance sky cranes on Mars?