Could a spacecraft be put into such an orbit that it would alternately slingshot around Mars and the Earth?

I was wondering if a spacecraft could be put into such an orbit that it would alternately slingshot around Mars and the Earth. This way it it would be making a continuous trip from Earth to Mars and back and repeat.

My motivation for wondering about this is to have a large spacecraft or even space station performing a bit like the Lunar cycler, which "...can provide an efficient and regular method for space transportation..." but of course the orbital mechanics would be very different in this case.

As mentioned, these orbits are known as orbital cyclers or cycler trajectories and (in theory) can be found between any two bodies. They are orbits that closely approach the two bodies at regular interval without requiring large trajectory adjustments.

In fact, there will be many possible cycler trajectories for two given bodies, determined by integer multiples of their synodic period - the time between subsequent conjunctions.

For the Earth-Mars system, the most famous cycler is the Aldrin Cycler (Dr. Buzz Aldrin of Apollo fame), which corresponds to a synodic period of 1 (approximately 2.135 earth years). 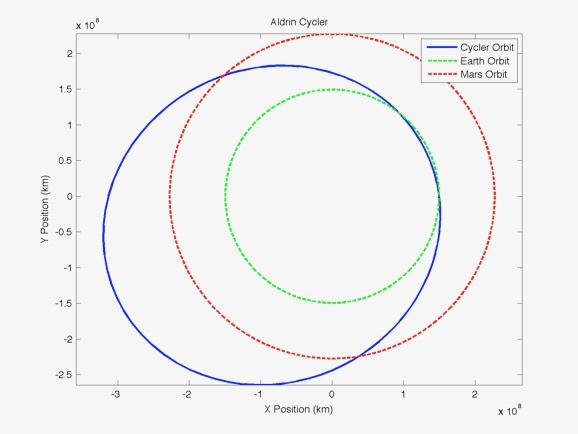 An Earth-Mars cycler may be particularly useful for manned interplanetary travel. Heavy equipment such as life-support, radiation shielding and accommodation can be left on the ‘cycling’ craft and a smaller, lighter vessel can be used at either end of the journey to decrease relative velocity and enter orbit around the planet.

See this question for more detail on the usefulness of this system.

Not the answer you're looking for? Browse other questions tagged mars travel or ask your own question.

39
What uses would the Aldrin-Cycler have?
17
Space train concept picking up/releasing cargo
2
Could a small Mars Cycler be used for repeated sample and big data transfers?

31
Why not travel to Mars in 2 months?
39
What uses would the Aldrin-Cycler have?
2
Could a small Mars Cycler be used for repeated sample and big data transfers?
6
Multiple Gravity Assist from Moon to reach Mars
4
What are the technologies that can identify, validate, and quantify water-rich locations on Mars?
3
Would gold mining on Mars be truly profitable?
1
Would it be possible to reach Mars using the same fuel-saving method SpaceIL's Beresheet is using?
2
With Ultra Safe Nuclear engines and hydrogen propellant, how far to Mars could you get and still be able to return to Earth in an emergency?
6
Why does the Buzz Aldrin Mars Cycler not play a larger role in planning for Mars exploration?