The Spaceflight Insider article Dawn will enter lowest ever orbit around Ceres says:

In his Dawn Journal blog, mission director and chief engineer Marc Rayman discussed the challenges of bringing the spacecraft into its final orbit in detail.

During XMO7, Dawn should orbit Ceres once every 27 hours and 13 minutes, which equals exactly three times the dwarf planet’s rotational period. In what is known as a three-to-one resonant orbit, the probe should complete one orbit around Ceres for every three rotations the dwarf planet makes. (emphasis added)

An orbit who's period matches the sidereal rotation period of a body is called a synchronous orbit. Geosynchronous (but non-Geostationary) satellites around earth have an Analemma shaped ground track. According to my own answer to the quest Are there terms for Earth orbits with rational number multiples of 1 sidereal day? an orbit who's period is artificially synchronized to a rational fraction of the sidereal period of the central body is called a repeat ground-track orbit and not a resonant orbit.

These are non-resonant orbits where the orbital period is matched to a rational number times the sidereal rotation period of the orbited body. Spy satellites used to do this so that the time of day was about the same for each pass over a given area to be photographed, to reduce the variation in shadows and illumination.

A resonant orbit on the other hand usually involves a gravitational interaction between two bodies. There are various situations where resonant orbits appear in the solar system involving three bodies (two moons and a planet, two bodies and the Sun) and there are at least two known examples of resonant tidal locking of the rotation rate of the smaller body with it's orbit: Mercury (3:2) orbiting around the Sun, and the Moon (1:1) orbiting around the Earth.

But I've never heard of the smaller orbiting body being in resonance with the rotation rate of the larger body. You could say that a geostationary non-station-keeping geosynchronous satellite that "falls into" a certain longitude range stationary points because of Earth's lumpy gravity is such a resonance, so maybe I have.

The problem though is that I am not sure why Dawn's orbit around Ceres is called "resonant" and not simply "synchronized 3:1". As far as I know, the term "resonance" always implies a locking or an interaction between two oscillators, so that they are "pulled into resonance" by the interaction.

QUESTION: I am wondering if Dawn's orbit is truly in a resonance with Ceres due to some multipole component of its gravity field, or if this is really just an artificially synchronized repeat ground track orbit and the term resonant doesn't actually apply.

I noticed that the Astronomy Now article Dawn spacecraft dropping to record low altitude at Ceres seems to be careful to never use the "r-word" when it describes the orbit:

The goal is to synchronise Dawn’s orbit with the nine-hour four-minute rotation of Ceres to ensure the spacecraft will repeatedly fly over a specific point on the surface – Occator Crater, where highly reflective salt deposits are visible – during the low point of each orbit.

“The flight team will synchronise the orbit so that each time Dawn swoops down to low altitude, it does so at just the right time so that Ceres’ rotation will place the Occator geological unit under the probe’s flight path,” Rayman writes. 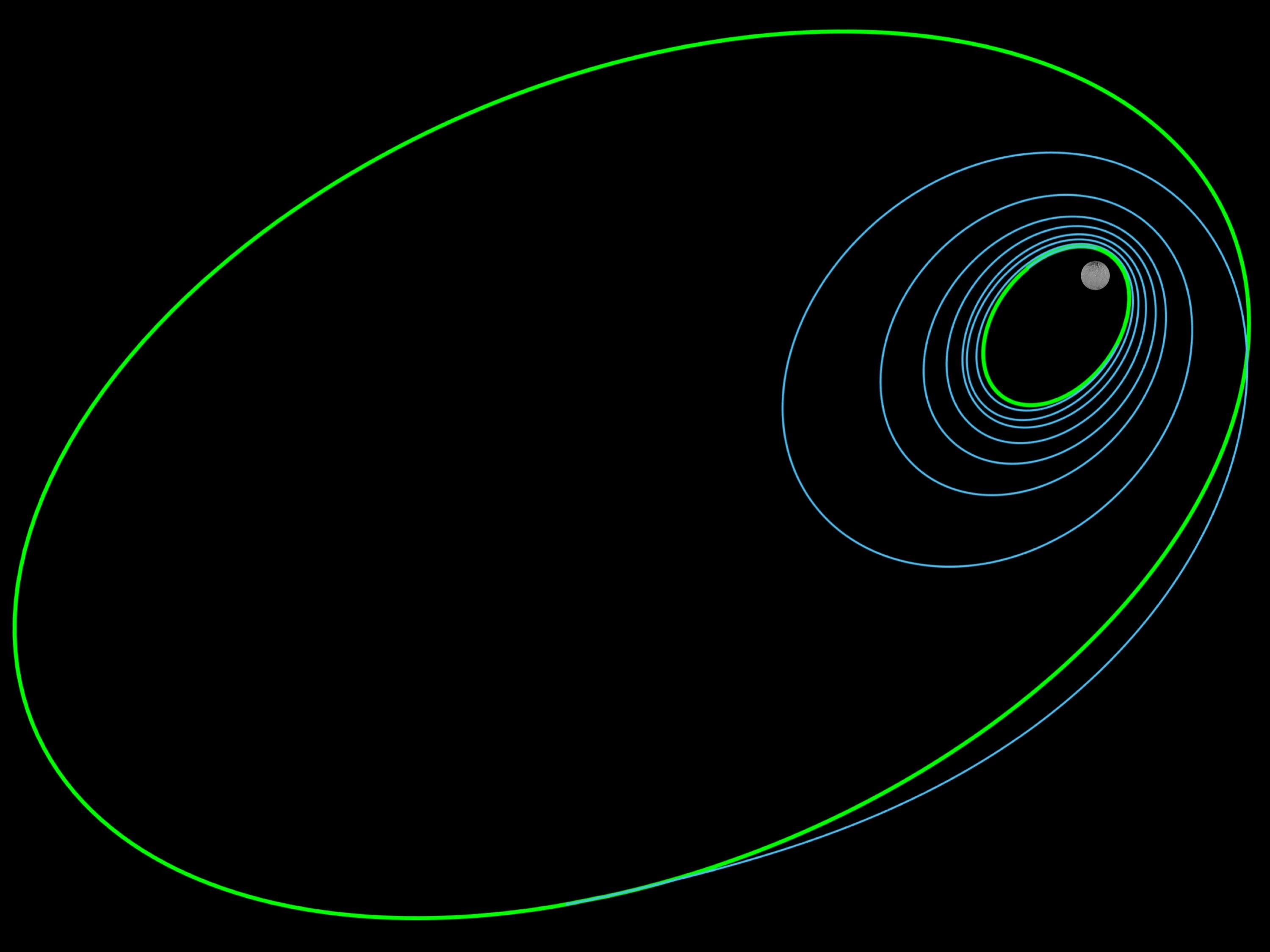 What you might be seeing here is language being made. When scientists start studying a new field, they sometimes have to invent words to describe what they see. Here, two sets of scientists independently came up with 2 words for the same phenomenon.

This is not a complete answer but I can offer an example of an orbit being in resonance with the rotation rate of a central body.

Astrophysicists indeed sometimes use the word "resonant" to describe orbit synchronization with a rotating primary. That synchronization doesn't have to be 1:1: it can be 2:1, 5:4, any ratio of integers.

The literature involved with kronoseismology and its observable effects on Saturn's rings is one example of this usage. For instance, Matt Hedman's and Phil Nicholson's 2014 paper describing wave features in the rings arising from density contrasts within Saturn itself uses "resonance" to describe the ring particles' orbit commensurabilities with internal Saturnian normal modes.

Not the answer you're looking for? Browse other questions tagged orbital-mechanics terminology dawn-mission ceres or ask your own question.

7
Has ion propulsion ever been used in a deep space trajectory correction maneuver proper?
12
Xenon vs Hydrazine, "Should I Stay or Should I go?" Dawn mission decisions
4
Are there terms for Earth orbits with rational number multiples of 1 sidereal day?
7
How can I verify my reconstructed gravity field of Ceres from spherical harmonics?
4
Under what conditions can a non-resonant satellite stay hidden from an observer on the ground?
4
What factors would make station-keeping of an Areostationary Mars satellite necessary?
4
What (actually) is a 1:1 resonance, and is 2016 HO3 in one with the Earth?
4
Is TDRS-M (TDRS-13) where it's supposed to be?
1
What might this "NS" mean in this speculation about this Mars rover's future prospects?
0
Why are ICESAT-2 and CRYOSAT 2 both at inclinations of almost exactly 92 degrees?
See more linked questions

18
Why explore Ceres?
12
Xenon vs Hydrazine, "Should I Stay or Should I go?" Dawn mission decisions
10
Does the "17" really mean anything with respect to GNSS orbits being rational factions of a sidereal day?
4
Under what conditions can a non-resonant satellite stay hidden from an observer on the ground?
4
Can mascons have Lagrange-like points? In principle? At the Moon?