Why do we not fly to space with helicopters? What are the practical altitude limits?

People will tell that there is no air, and this is why we cannot. But if I read on the internet, there is air in space, much less, but still something.

Talking practically: NASA already built a prototype of the helicopter which will fly on Mars where the atmosphere is the same as 30 km high on The Earth.

if I take some software to calculate propeller thrust like this Propeller Selector and I calculate this very particular practical example. If I take this propeller which cost 50 euro and this engine which cost 9 euro, then I can fly up to 30 km with only 381 watts of power for 8140 rpm. Fly I mean it will produce 1 kg thrust, which enough to hold 29 grams engine, 349 grams propeller and let say 500 grams for the power source (we can even use a solar panel for it). Calculations are shown in the picture below: 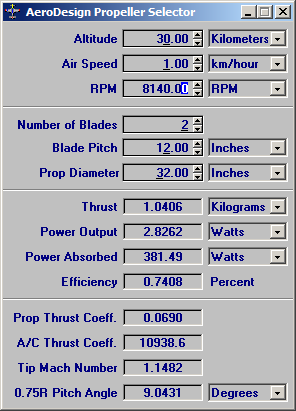 and the same configuration will fly (produce same 1 kg thrust) on the surface with only 47 watts of power and just 1000 rpm. 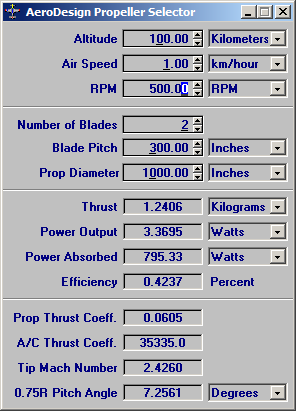 I general, we just need big enough propeller, and because of very low air pressure, we will not need a lot of power to make it rotating fast. Also, we can make propeller very thin, because it should not be very strong, because of low pressure as well. Another point, that we can use different propellers for different altitudes, like many stages rockets.

Thank you, everyone, for very valuable comments. I will do exact calculations with the real propeller, motor and solar panel to see how high we can go.

The main problems as I understand is the weight of propeller + power source and strength of the material of propeller.

If solar panels were 10 times lighter, then 20 km could be reached.

So far, I see only 2 problems:

Other problems from comments:

At those kind of speeds, even though it doesn't take much power to get a very light rotor going, there is still an awful lot of force involved which has to be handled by the materials to prevent them literally tearing themselves apart.

At 100 km altitude, you get to the Karman line. This is the altitude where you have to fly at orbital speed to get sufficient lift. This definition is based on the lift equation, which applies to all airfoils including that of a helicopter rotor.

Because the blades rotate, the inside of the blade travels at a lower speed and the outside travels at a higher speed. Taking the average, the midpoint of your blades would have to revolve at 27,000 km/h.

I wouldn't want to cope with the aerodynamics of blades that go from 0 to 54,000 km/h twice per rotation, nor with the centrifugal forces in the rotor system.

*: in a rocket launch, the fairing is usually jettisoned at an altitude of ~100 km, when the heating effect drops below 1 kW/m2. The rocket is far below orbital speed at that point (5000 km/h?). Aerodynamic heating scales with the square of the speed, so a helicopter rotor would be subject to 100 times that.

Approaching from a different angle: at 100 km, atmospheric pressure is 10-7 bar. So your rotor blades need to have 107 times the area to get the amount of lift you need to hover. Your propeller has an area of 32"x1" (roughly), at 100 km that goes to 32 million sq in = 222,000 sq ft is 20,000 m2 is a propeller longer than a Boeing 747. There's no way to make a structure that large within your weight budget. You could increase lift by increasing speed, but then you're back to supersonic propellers.

The lift of an aerofoil (any aerofoil, including a helicopter rotor) is governed by this equation:

Both inevitably increase weight, which means you need more lift. This is a vicious cycle, and at altitudes far below 100 km you get to a situation where no material in existence is light enough to make your helicopter work.

In theory a plane could reach most of the way to space, but it won't be able to reach orbital speeds.

The propellor needs to be strong enough not to pull itself apart via centrifugal force. If you go through the math, you find that the maximum stress on the propellor blade will be halfway along its length, and will have the value $$ \sigma = \frac{1}{4}\rho L \omega^2, $$ where $\omega$ is the blade's angular velocity (usually measured in radians/second) and $\rho$ is the density of the material (usually measured in kilograms per cubic meter.) Re-arranging this, we find that the specific strength of the propeller material must be $$ \frac{\sigma}{\rho} = \frac{L \omega^2}{4}. $$

For a 12.5-meter length blade rotating at 500 rpm, this works out to be $$ \frac{\sigma}{\rho} \approx 34 \text{ kN}\cdot\mathrm{m/kg}, $$ which is still within the realm of known materials. However, as you get higher, you'll need to increase either the size of the blades, their rotation rate, or (probably both); and eventually you'll get to the point where you have to build your helicopter blades out of unobtanium.

OrganicMarble touched on this in a comment but I think it deserves an answer as well, since the question doesn't stop at the Karman line (approx. 100km if you're really defining it as the height where the velocity required to generate lift exceeds the orbital velocity).

In simplest terms: just because there's a few atoms of gas present at some height doesn't mean it's acting like a gas does at sea level.

Part of the reason a wing (and make no mistake, a helicopter's rotor is absolutely a wing for these purposes) works at all is because air fills in around it. Air rushes in behind it because air molecules fly around and bounce off of each other and fill up space, and so you can keep pushing down air, which in turn pushes up your wing and whatever is attached to it.

This is really aerodynamically important! The wing doesn't have to literally hit a molecule of air to get involved with that molecule, because the molecules are involved with each other. The wing or rotor disc can use a lot of the air around it!

As height increases and the ambient pressure drops (because gravity drags the air down, and there's only so much air around for the other air to essentially stand on top of) that space-filling effect really isn't happening anymore. The air molecules are doing a lot less bouncing (their mean free path is longer) and so once you push them out of the way there's nothing left to push down on. You essentially only interact with the air you hit.

All that is to say this premise

is wrong. Once you can't fill in air for the propeller to grab, you're essentially just as likely to bounce your 30,000 atoms off the top than the bottom. This doesn't matter for something like a vacuum pump, because if the molecule bounces off the top eventually it should get another chance to come back to the pump by bouncing off the vacuum chamber's walls. When you're in open space, it means the net force your propeller can create is zero.

If you're an experimentalist, this is trivially true just by observing that the Space Shuttle had giant wings and completely ignored the lift that it generated while it was in Low Earth Orbit. The International Space Station also has giant wings (the solar arrays!) and mostly thinks of those in terms of drag. Think of how many cubic decimeters the ISS has intersected in its decades on orbit! (Lift generation for both is actually more favorable for both of these than for your helicopter, since they move sideways at terrific speeds, thus encountering regions where they haven't already hit all the available air molecules.)

We don't fly to space with helicopters because we can't. We would if we could, believe me.

Aside from all the very valid concerns raised by others, the question doesn't properly account for weight*. Maybe your 32 inch diameter propeller weighs 349 grams, but the 10m one certainly doesn't. Oh no! Now 1kg thrust won't lift it at all! So you need more power! So you need more fuel/energy! So you need more thrust...

Solar panels won't solve your problem. They sound great when you don't need a lot of power, but their specific power (Watts per kilogram) doesn't hold up versus something like a jet turbine or rocket engine. Batteries also don't have specific energies (Joules per kilogram) comparable to hydrocarbon fuels yet.

The world's current helicopter altitude record is a bit less than 41,000 feet. Ultimately helicopters just can't put enough power into the air to continue lifting themselves. They all eventually hit a thrust-to-weight ratio of 1, even though a turbine helicopter has vastly more power available than the helicopter you're proposing.

Why does the proposed Mars helicopter work while yours wouldn't? Because it doesn't go very far. The power requirements favor a small helicopter, since the weight drops so much more rapidly than the thrust as it scales down, but the flight times being talked about are about 90 seconds (much like terrestrial drones!) So it couldn't make it from an Earth Sea Level equivalent altitude to the proposed Mars Equivalent altitude; it would run out of energy before it got there.

(*I see in comments on other answers that you've said it's "just a matter of propeller and solar panels weight." It is, but you can't make them arbitrarily light. There's no scaling law that even suggests they'll get dramatically lighter over the next couple decades.)

The propeller would still weigh a lot!

Not the answer you're looking for? Browse other questions tagged spacecraft spacecraft-development uncrewed-spaceflight or ask your own question.

1
Can we use a drone instead of rocket?
15
Where can I find data for Atmospheric density vs. altitude?
11
How many rockets have been launched into space? (roughly, of course)

5
Could steam be used as a efficient power source for a space craft?
6
How are phased array antennas used in spaceflight? Benefits and limitations
6
Is a spherical rocket design a plausible replacement for current designs today?
1
How will GOES-R simultaneously point some instruments down at Earth and others sunward?
0
Could a spacecraft be propelled by the deflection of a very high number of charged particles?
5
What is the timespan for a block of Phobos to reach a low orbit around Mars with a solar sail?
12
Is it possible to get a spacecraft into earth orbit using Linear Eddy Current Braking on an orbital runway?
2
Won't any space battle fill up the system with supersonic lethal shrapnel, making space very dangerous?