On videos of Soyuz docking to ISS we can see exhaust from the control engines (if background is dark enough). For example here

Soyuz TMA-19M docked to ISS at December 15 2015. Exaust plume is circled at screenshot: 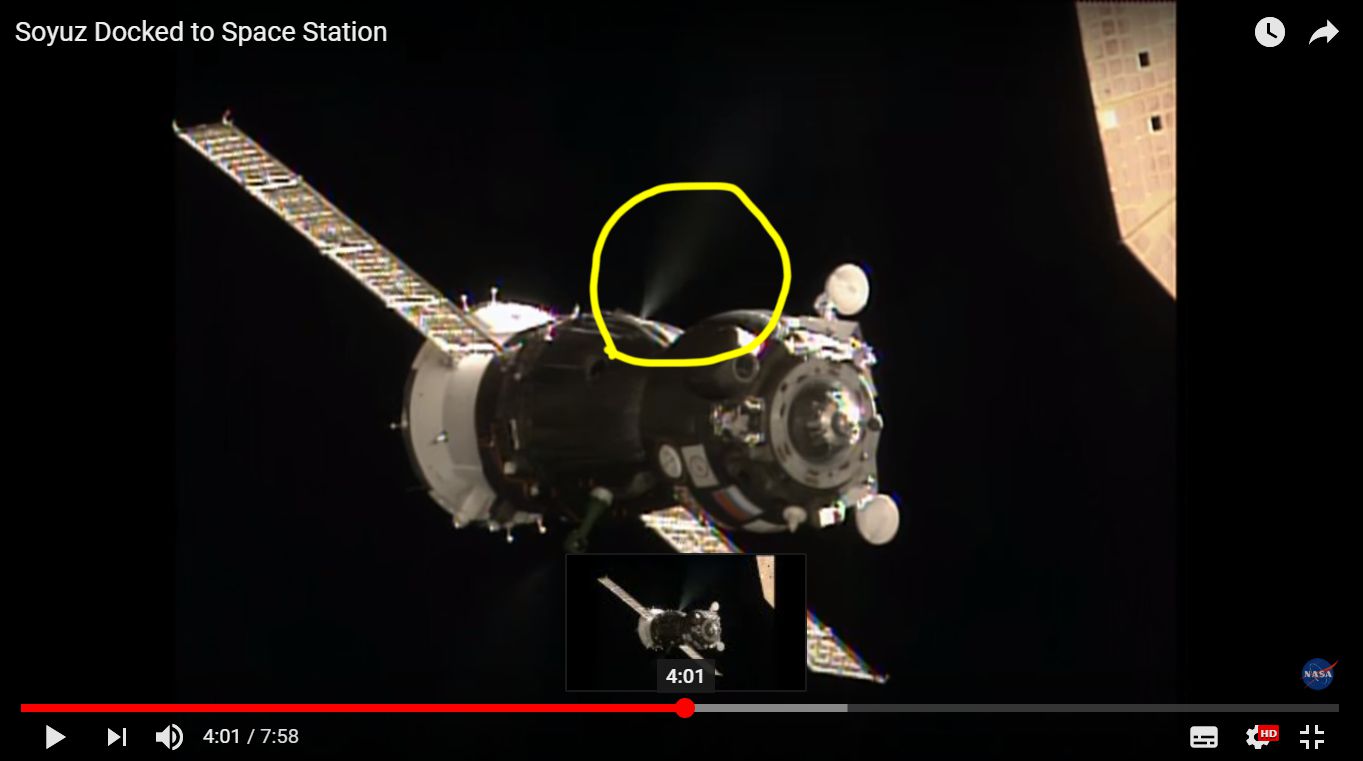 The textbook chemical formula of the NDMH and nitrogen tetroxide reaction is:

How are visible ice crystals are forming in the exhaust? The molecules of exhaust products should be too hot and moving too fast... Or any other products occur in the reaction?

Also I wonder about the contamination of spacecraft by hypergolic exhaust products. The Hubble telescope has no reaction engines because of this concern. The ISS has limitations for use of reaction engines in close proximity. But if exhaust products are nitrogen, carbon dioxide and water - can they cause a long-term contamination, not just icing? Or they can react with metals because of their high speed?

So, to reformulate the question:

Summarised some points in self answer

Well, after useful comments and some research I can summarise:

The chemical reaction of bipropellant hypergolic fuel is more complex:

1) There are more products of the reaction

2) Some part of the fuel remains unburned

In this link by @Uwe is stated that exhaust plume contains microdroplets of unburned propellant, with size up to several micrometers. Quote:

In this paper a formula of hypergolic bipropellant burning products is given as:

where a, np1-np15 are coefficients to be found. But unburned propellant is not taken into account there.

In this pdf the basics of plume impingement are given. It has a picture of unburnt propellant droplets inside engine's nossle: 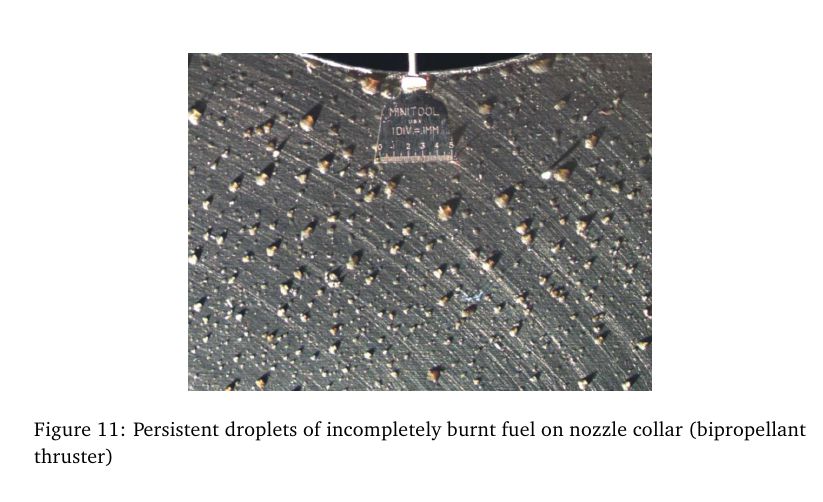 Also interesting detail - exhaust plume in vacuum has "back flow", so small part of it spreads in opposite direction and it should be taken to account as contaminant:

I suppose that particles are frosen droplets fron engine's nozzle.

I would say the question is partly answered. But there is one thing that I have completely forget:

This question deals with it. Links there are interesting, but not completely relevant, I think. The nitrogen is in gaseous phase when it exits a nozzle (of nitrogen thruster or hypergolic thruster). So it's rather "conterintuitive" that the gas spreading in vacuum forms ice crystals. The gas "should" only spread ever more in vacuum, not condense..

At this moment I could not find any reference on physics of this process. If anybody could explain it, the question would be completely answered.

The bright particles you see flying from the Souyz nozzle are the pieces of the "nozzle cowling". It is kinda ceramic material coating of the nozzle. The amount of coating is calclulated for the nozzle operation. It wears off gradually during the nozzle serving time.

In-short, the answer is that at the beginning and especially end of an RCS thruster firing, there are clouds of unburned reactants. Source (for the shuttle, which has a very similar chemistry):

In a discussion with a NASA aerospace engineer familiar with the space shuttle reaction control system, I learned that the thrusters never generate any light while operating, but they always emit a small cloud of unburned propellant just before the thruster fires and a much larger cloud immediately after the thruster shuts down.

When the valves are closed to shut the thruster down, small amounts of propellant are trapped in the tubes between the valves and the combustion chamber. [... In] the vacuum of space, the "microscopic snow" also forms after shutoff just as it does at startup. But[, in this case,] the dribble volume is large enough that the snow generated can be seen as a white plume in reflected sunlight. It is totally invisible without some external source of illumination.

Note: there are a few alternate theories I came across which, while apparently less-plausible, may still at least contribute to the effect. I have seen (less-credible) sources suggesting that either the fuel or the oxidizer is injected first (for safety purposes, presumably), leading to unconsumed propellant/oxidizer, and that in longer OMS burns the plume is invisible. Also, CO₂ ice would be present in addition to water ice.

Not the answer you're looking for? Browse other questions tagged propulsion hypergolics or ask your own question.

8
Why is the gas jet from Falcon 9's cold gas thrusters so clearly visible?
3
What is the products of a catalyzed reaction between Hydrogen Peroxide and Ethanolamine with Copper(II) Chloride?
3
What is happening in this photo of a glowing plume behind STS-70 and how was it taken?

9
Why do lower molar mass rocket exhaust products give higher specific impulse?
10
How reliable are pressure fed hypergolic engines?
4
Is nitrous oxide hypergolic with anything reasonably safe and obtainable?
4
Hypergolic Propellant Combination
5
Are there any hypergolic solid/liquid fuel combinations?
3
Would symmetrical dimethylhydrazine work as a hypergolic fuel?
2
Is there a "green" hypergolic propellant?
3
Hypergolic Engine Diagram
4
Can rocket engines which use hypergolic propellants be augmented with LOX for increased efficiency?