At NASA's blog you can read about the Soyuz flight for expedition 56-57. It says:

Why does it take two days this time? On previous missions, such as Soyuz TMA-08M, it took only six hours.

Why do they take the "slow" flight path now?

TLDR: opportunities of launches to ISS with 6-hour rendezvous are more rare than for 2-days rendezvous.

The main reason of 6-hour rendezvous of Soyuz is to save time for cosmonauts/astronauts to work in ISS. But 6-hour scheme have very tight requirements for ISS orbit. The path of ISS should be exactly above Baikonur cosmodrome at the moment of launch. It occurs not every day. Roskosmos usually makes ajustment of the ISS orbit before Soyuz launch to align them more close. But ISS is big, over 400 tonnes, so only tiny orbit corrections are possible.

Also should be noted that upcoming launch of Soyuz TMA-09M have small gap with return of 3 ISS crewmembers on Soyuz MS-07. They landed only 3 days before, but usually the gap between landing of previous crew and lauch of the next was about 2 weeks. So, I think the purpose is to maximise occupation of ISS.

Progress cargo launches also used 6-hour rendezvous. It was done for testing the scheme for Soyuz launches with crew. Now Progress usually take 2-days rendezvous. Short 6-hour trip could have benefits for some sensitive cargo (biological samples, frozen items, fresh food), but I don't think it's so valueable. Could be better to add some mass for freezers, packadge, etc. and make your mission more flexible and able for 2-days flight.

Roscosmos also tried ever faster 3.5-hours rendezvous scheme with Progress MS-07 and Progress MS-08. But there are ever more tight requirements for launch window. As a result, the launch windows were missed in both cases, and the Progresses were launched at 2-day scheme instead.

That factor of the return crew is specifically mentioned in the first social media question they answered after the launch:

Why does it take two days for @Astro_Alex & crew to get to the ISS when it was possible in 6hrs already?

My understanding is that essentialy because we had the space station, its orbit and phasing, addressed to allow the recent return of the crew, it's just the current position of the space station right now made the launch window such that they had to use this long rendez-vous profile, instead of the shorter profile that we've kind of become used to.

Morphing the question a bit to "Why two days?", this page gives a chronology of an (early) 2-day trip (in terms of 90-minute orbits). From a celestial-mechanics point of view, it's not that complicated a burn sequence:

So theres a lot of time between the DV1/DV2 maneuvers early on, the "Rendezvous burn" in the middle and the final rendezvous.

Some of the extra time is due to how long humans can be on the job: After 4 orbits (roughly 6 hours), the crew stops for a meal, and orbits 6-12 are crew sleep. There's also a number of manual operations, voicing-up form contents, etc.

Contributing to that is that Soyuz seems to rely entirely on Russian tracking resources, so is only being tracked for a part of each orbit. Post-burn checks and computations seem to take multiple orbits (i.e. quite a few hours), and push into bio-cycles.

But fundamentally the delays seem to be for phasing with the ISS orbit. Soyuz reportedly has a 150-degree phasing margin, which makes windows appear much more often. The two-day sequence is based around the time needed to do that full range, even if some of it isn't needed for a specific launch.

This careful sequencing and measurement contrasts with the later-developed quick rendezvous:

To achieve a four-orbit link-up, designers switched from ‘measure first, fire second’ to ‘fire first, measure second’ – i.e. instead of spending an entire orbit in the injection orbit for measurements of the initial orbit parameters before making orbit-raising maneuvers, the new rendezvous calls for initial maneuvers to be completed on the first lap around Earth based on the planned orbital injection parameters. Measurements of the actual parameters taken after injection are extrapolated with the pre-planned burns and correction maneuvers are designed to take place on the second orbit of the mission to position the spacecraft for the initiation of the Automated Rendezvous Sequence on Orbit #3.

The launch windows are narrow (because there's very limited phasing ability to have the orbits rise up to the ISS right away) and few (because there's no place for an extra adjust-inclination burn). But it's a quicker trip! 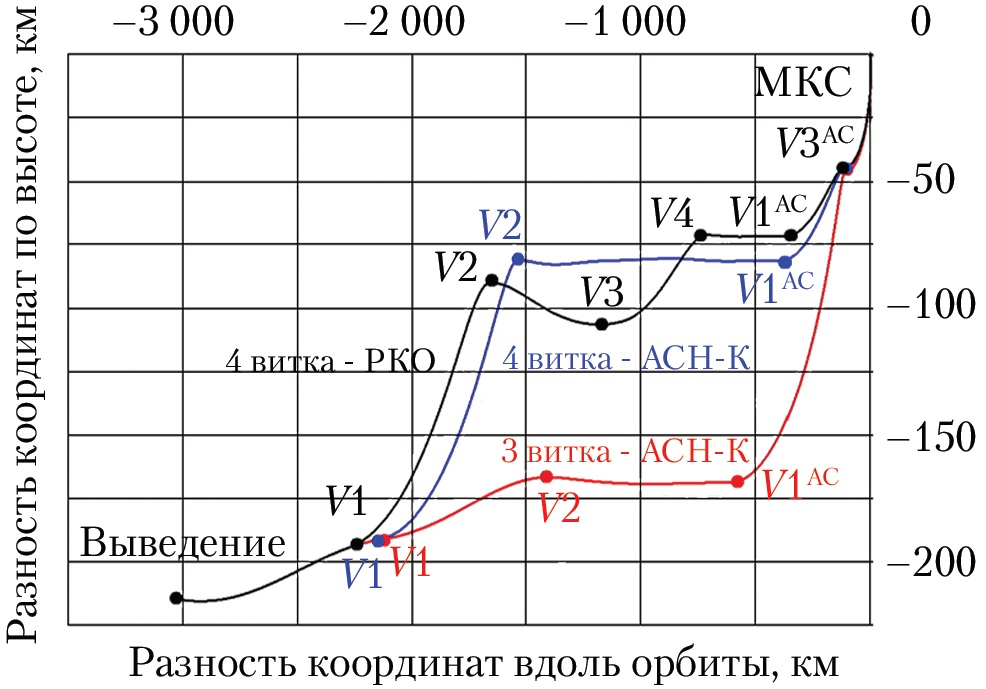 19
Why do Soyuz landings seem to be overshot?
21
Why did Soyuz TMA-18M take two days to reach the ISS?
22
How did Soyuz MS-04 reach the ISS in only 6 hours?
10
Why does it take three years to manufacture a Soyuz spacecraft?
2
With current or near-future projectable technology, how long would it take a ship to fly from Earth to a theoretical Earth-Sun L4 or L5 space station
10
With six spacecraft currently docked at the ISS, how could Santa (or anyone else) deliver presents?
3
Where all is ROSA (roll-out solar array) planned to be used?
2
Which S-Band ISS antenna stopped transmitting to TDRS and was replaced during the recent 2021-12-02 EVA?