What GEO relay satellite will the ISS use for end-to-end optical communication with a ground station?

If I understand correctly, in this demonstration one end would be the ISS, and the other would be on Earth. The paragraph continues:

ILLUMA-T will provide the space station a state-of-the-art optical communications terminal with improved size, weight and power over comparable radio-frequency communications systems. It will communicate data from low-Earth orbit to the ground through a relay satellite in geosynchronous orbit, leveraging optical communications technologies from the upcoming LCRD mission and the Lunar Laser Communication Demonstration (LLCD) that orbited the moon from 2013 to 2014. Optical technologies have the potential to greatly increase the amount of scientific data transferred from space to ground, supporting multiple channels of ultra-high-definition video from space.

Question: Has a mission or specific satellite been named to be this relay satellite in GEO that the ISS will use for its end-to-end optical communication with a ground station? Is there a description and/or an estimated launch date for this satellite?

ILLUMA-T will work with the LCRD flight segment payload on Space Test Program Satellite-6 (STPSat-6); see page 4 of this document from SCAN. 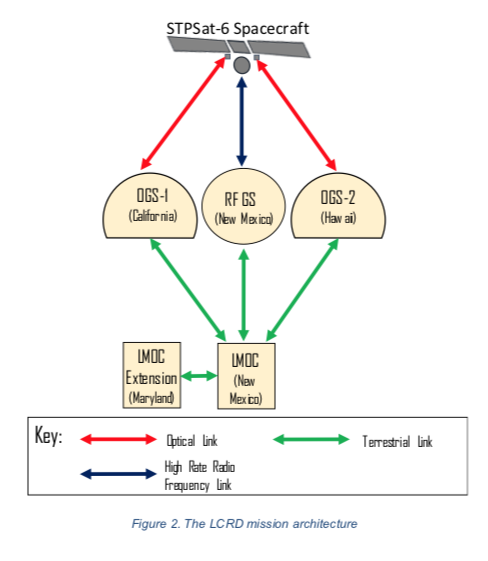 STPSat-6 is intended to carry a bunch of different payloads as part of the Space Test Program (STP-3) launch "no earlier than June 2019" on an Atlas V.

Basically, multiple test programs are working together to get the various parts into place when they can. It's probably a nightmare of project management.

Not the answer you're looking for? Browse other questions tagged iss nasa geostationary optical-communication or ask your own question.

7
Is telerobotic surgery logistically feasible in orbit?
2
How would you calculate the maximum bandwidth possible in space?
1
Intercommmunication between crewed space missions in all planets of solar system
1
Will future deep space optical communications "ground stations" actually be in space, or on the ground?