How do I determine the ground-track period of a LEO satellite?

I was analyzing a LEO satellite with polar orbit for work purposes. I am relatively new to the field of Satellite orbits. I know that TLE can give information about the current & future orbits depending on Epoch time.

I have a MATLAB simulation which uses the TLE & gives me a Satellite trajectory for a period of time. The satellite that I am observing has a orbital period of 106 minutes. But I just now realized that since earth is also rotating, each time a LEO completes an orbit, it is at a different place. So, I want to know after how much time & how many orbit periods later does a LEO satellite come back to the exact same place & repeat the trajectory.

If, however, it isn't the case in actual satellite orbits because of various forces acting on it, then in a hypothetical case of a spherical earth model & assuming that no forces act on the Satellite including atmospheric drag, & gravity of Sun, moon & planets, after how much time does the ground track repeat?

I can run the simulation for a long time & do trial & error to find after how many hours/days/months/years it comes back to the same place & repeats its trajectory but that will take a lot of time & inefficient. Can TLE or any other satellite data give me that information?

Suppose a spacecraft is orbiting around a planet with no atmosphere, a perfect spherically symmetric mass distribution, such that the gravitational field can be expressed as that of a point at the origin using Newton's Shell theorem, and there are no other forces or bodies in the universe.

A repeat ground track will occur only when the ratio of the rotation periods of the planet and spacecraft is a rational number, i.e. the ratio of two integers.

Then the period of a repeat ground track will be the shorter of the two periods times the larger of the two integers, or vice versa. A simple way to think about this is to just imagine the moment the satellite crosses the equator, or passes x=0 (asuming z is the rotation axis of the planet). You have to be a little careful with your imagination if it's a purely polar orbit, but the same math works.

For example, say the planet rotates every 1440 minutes, and the satellite orbits around it in space with a period of 115.2 minutes.

Find the integers $m, n$ such that

The Earth's gravity field is lumpy, so circular or pure Kepler elliptical orbits don't really exist in nature. There are gravitational effects from the Moon and the Sun, and drag effects from the atmosphere in LEO.

So "never" is the short answer.

Here is a GIF of an animation I once made of a hypothetical ground track of a satellite in a similar to the ISS for example. I used math from the Technical Details subsection Wikipedia article Sun-synchronous_orbit including the precession of the nodes due to Earth's oblateness. It's a simple calculation and does not include many effects

While there are certain altitudes that create an apparent repeat ground track for a short time, it's just an illusion.

See also this answer to the question How long does it take for ISS to travel over all possible places of the world one time? for more to think about.

below: low res GIF of snippet of a simple animation I once made of a ground track for ~17 days of a circular orbit of varying altitude, includes precession of nodes due to J2.

For fun, here's how to do it in Python. Skyfield introduced a .subpoint() method in version 1.3 (it's now at 1.4) so getting the ground track of satellites is easy!

Here is the ground track of the ISS for the first seven days of June 2018: 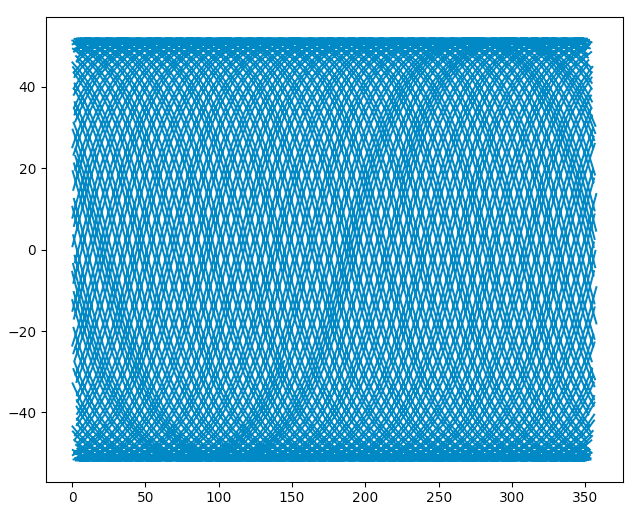 1
Satellite inclination, 3D scanning of earth's surface
6
How long does it take for ISS to travel over all possible places of the world one time?
5
Are there terms for Earth orbits with rational number multiples of 1 sidereal day?
4
Is it possible to predict if an orbiting satellite will pass over a given point on Earth after n periods?
2
ISS nodal precession

7
LEO metric to determine the ground track of a satellite
10
Will SMAP produce predictable satellite flares visible to the naked eye from the surface of the Earth?
2
Ground longitude/latitude under a satellite (cartesian coordinates) at a specfic epoch
1
How frequent do TLEs of LEO satellites change?
1
Point Ahead Angle Calculation between LEO-GEO Satellite (ISL Scenario)
6
Does Tianwen-1 have a near-repeat ground track orbit in order to scan the same general area on each of its low altitude passes?
2
Determining the launch period for Hohmann transfer
26
How do we ensure an orbit of a satellite doesn’t interfere with existing ones?
2
Equatorial LEO Satellites