Significance of methane on Mars

Considering the audience of this site, many of you are likely aware that NASA has found methane on Mars. I've heard many people saying that this indicates that life is significantly more likely to have occurred on Mars. However, we also know that many terrestrial bodies have methane, sometimes even in considerable amounts in their atmosphere. My question is by how much does this finding increase the probability of finding life or remnants of life on Mars if at all and what other significance does this hold for future space exploration?

On Earth, pre-anthropogenic biological activity accounted for some ~85% of methane emissions, the majority of which was from the decomposition of dead plant material in wetland habitats by anaerobic bacteria.

In modern times, an even higher proportion of emissions comes from biological sources, due to our extensive use of agriculture and fossil fuels.

Detection of traces of methane in extraterrestrial atmospheres is not on its own clear proof of biological activity as relatively large amounts of methane can also be produced by geological processes and later released into the atmosphere through volcanoes, marine vents etc. Another methane source on Mars may be impacting meteors.

However, due to Mars's lower gravity and weak magnetosphere, it is believed that any atmospheric methane would be short lived, being quickly destroyed by photochemical processes.

Since it appears that Mars currently has very little geological activity, we can infer that any geologically-produced methane has long since dispersed and therefore any detected methane has a higher likelihood of being from biological sources - at least that's the hypothesis.

It's worth noting that the presence of biologically-produced methane doesn't imply that life currently exists on Mars, just that it may have done in the past.

Furthermore, an important distinction to make is that any observation does not change the likelihood of finding life on Mars - it's either there or it's not! All it can do is change how confident we are that we will or won't find life there in the future - it affects our expectations, but not the outcome.

This answer has a lot of good detail and discussion on the specifics of the most recent (2018) publications.

Further reading on methane as a bio-indicator and Martian geology.

If atmospheric methane on Mars is found to be a strong indicator of extinct or extant life, it will directly affect our procedures with regard to future exploration. Protection of potential extraterrestrial life is a high priority.

If found in large enough quantities or from a reliable source, atmospheric methane could be used as propellant in future missions. See SpaceX's in-development Raptor engine as an example. (Note: it's more likely that methane for this purpose would be synthesised from other naturally occuring chemicals, see Sabatier Process) 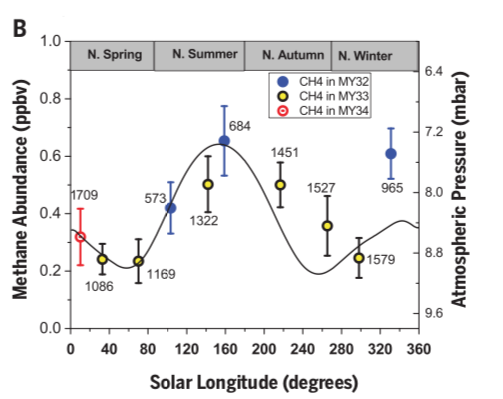 0.4 ppbv corresponds to just a couple of grams of methane per cubic kilometer of atmosphere. If correct, that means nobody is getting rocket-fuel methane directly from the atmosphere of Mars anytime soon; some process will be needed to generate it from other resources.

As to evidence of life: Earth's pre-industrial level was about 640 ppb in a much denser atomsphere. If this is from life on Mars, it's not much of a life. The paper goes to some trouble to consider other causes.

They also found much-larger pulses of methane that are harder to explain, either biologically or via other means: Geology, surface chemistry, even impact by methane-being meteors have been considered. 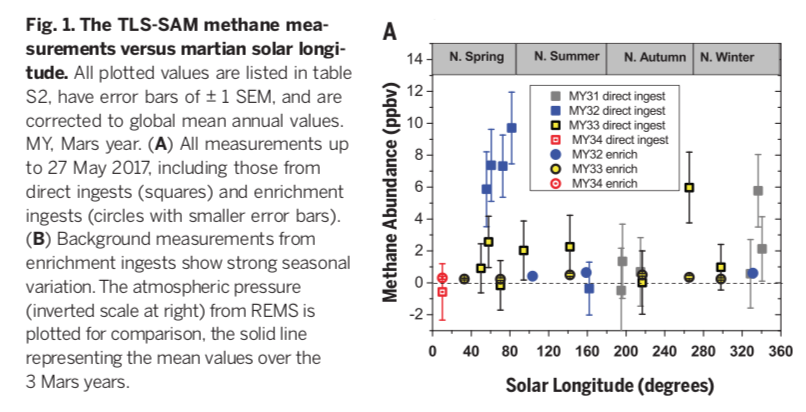 The conclusion paragraphs show how complicated this is, and how little is really completely known yet:

9
What exactly are the recent observations of organics on Mars? What's the data?
3
What new has come from the recent methane findings on Mars?

4
Methane internal combustion engines for rovers on Mars and Moon. Feasibility?
7
Methane detection on Mars by MOM?
4
Is production of methane possible on Mars?
9
What exactly are the recent observations of organics on Mars? What's the data?
4
Will the Mars 2020 rover's sensitivity to methane be better than Curiosity's?
3
What new has come from the recent methane findings on Mars?
2
Warming Mars by increasing dust infall?
4
Mars and back, staying only a few days
6
What precautions are planned to prevent samples returned from Mars crashing and releasing organisms on Earth?