Why aren't airbreathing SRBs a thing?

To the best of my knowledge, all solid rocket boosters so far use a propellant that is a solid mixture of both the fuel and the oxidiser parts of the reaction. However, given that SRBs are generally used in-atmosphere during the earliest parts of a launch (hence the "booster" appellation), one could potentially get a lot more oomph out of a given-sized SRB by only packing the fuel, and grabbing the oxidiser from the ambient atmosphere as you go. Since the SRB is moving at hypersonic speeds near the end of its burn, it'd pretty much be restricted to a ramjet-style intake, necessitating that the propellant immediately surrounding the central bore still contain oxidiser in order to start getting the SRB up to speed; once it's going fast enough, though, it wouldn't need any extra internal oxidiser, allowing the booster to either be made smaller and lighter while still delivering the same thrust for the same amount of time, or to have a longer and/or more powerful burn than a conventional SRB of the same size.

Here's a (very simple) sketch of what I have in mind:

So why don't airbreathing SRBs exist? 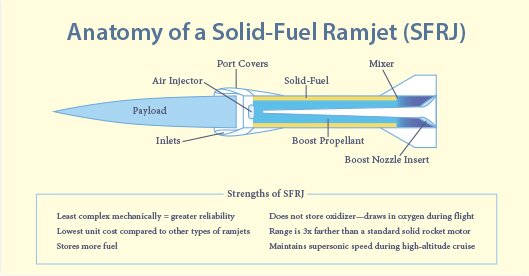 The problem for a launch system is you would need a lot of oxidiser anyway — ramjets only start to produce thrust from Mach 1.5–2. They also start to lose thrust above Mach 4–5. Add onto this the huge amount of intake air that would be needed for a system with a high thrust/weight ratio and the complexity of dealing with the varying thrust levels and it doesn't seem as attractive an idea as it did at first.

You'd need a complex intake: it has to be closed during ignition, with a large closing force (otherwise you'd have half the thrust going out the intake), then it has to move out and keep changing its position as speed increases (to keep the shockwaves coming off the inlet cone in the correct position), then after about (handwaving) 30 seconds it has to close again as inlet pressure becomes too low to keep the thrust flowing in the right direction.

It's a lot of added complexity to save 20 seconds worth of oxidiser.

Not the answer you're looking for? Browse other questions tagged solid-fuel booster oxidizer or ask your own question.

5
How will the SRBs used by the SLS differ from those used by the Shuttle?
12
Why weren't SRBs used in the design of the Saturn V?
20
Why were Delta II SRBs asymmetrically mounted?
13
Why are there so few solid rocket satellite launchers?
7
Why isn't someone building a fully reusable solid fuel rocket?
18
How were the Space Shuttle SRBs ignited? (with what?)
10
Why were large solid-fuel rockets so rare in the past?
7
Why “strap-on” boosters, and how do other people say it?
5
Why don’t any engines use turboelectric oxidiser pumps?