What is the angle between two orbits in the equatorial plane?

My orbit is in the equatorial plane. When i apply thrust in the y or x axis, it rotates around the focus or planet - see red and blue orbit in the image below. I know the the semi-major-axis and eccentricity of the ellipse before and after the thrust. 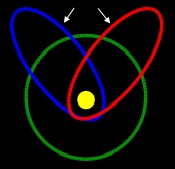 Please help me to find the angle around the focus.

Note :- Argument of periapsis and ascending node are undefined because the inclination is zero.

The argument of periapsis is the in-plane angle between an orbit's periapsis and its ascending node.

Therefore in the given diagram, both orbits would conventionally have their respective longitude of periapsis measured from the same reference direction, allowing us to differentiate them.

This document has some great detail on understanding this, page 13 in particular.

2
Argument of Perigee for a circular orbit