How can I verify my reconstructed gravity field of Ceres from spherical harmonics?

Based on @DavidHammen's very helpful answer I've made progress reconstructing the gravity field of Ceres from the Dawn radiometric data. The question there contains further information, but suffice it to say here that I am using Version 2 of the data at https://sbn.psi.edu/pds/resource/dawn/dwncgravL2.html

Some details describing this model are:
- The spherical harmonic coefficients are fully normalized.

The SciPy documentation says (I've just copied the html from inspection of the webpage and it magically formats here too, yay!):

I though I would compare to a published map, and I've found the image below which is topography and gravity, but these can not be compared for several reasons, including:

I understand that to get an acceleration magnitude map, you need to start with the gradient of the potential, but a full blown Bouguer anomaly can have other corrections way beyond what I need to understand right now. In fact what I'm after is modeling Dawn's low periapsis orbit.

Question: Instead of comparing to this Bouguer anomaly plot, I'd like to compare my reconstruction of potential directly somehow. How can I do this? How can I check it?

"extra credit:" Do the PDS coefficients yield a reduced potential (energy per unit mass) with units of km^2/s^2 rather than m^2/s^2? 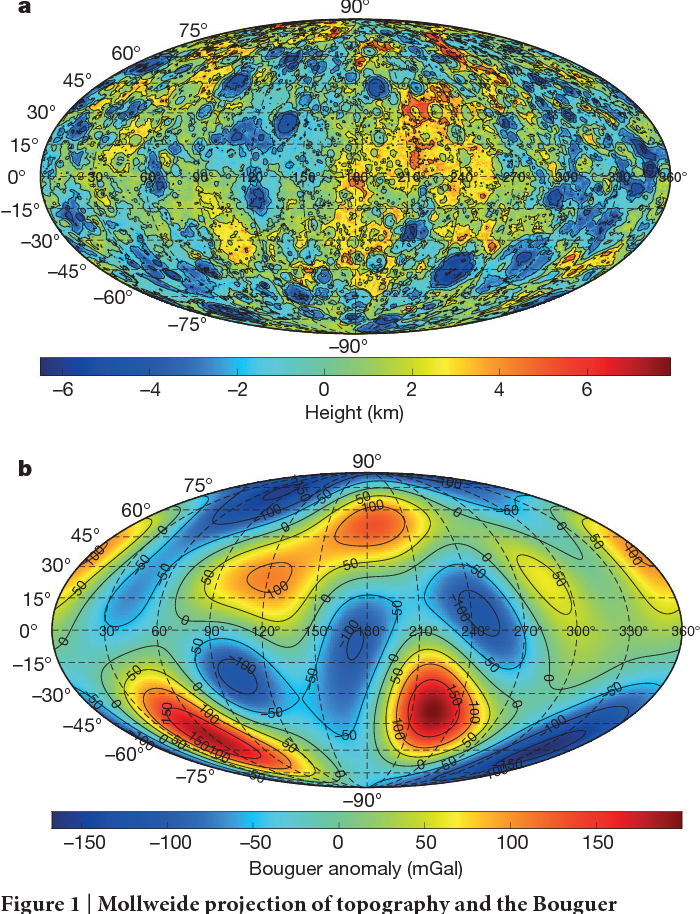 below: I've plotted U for n ≥ 5 and 4 because the low order terms overwhelm the r = Rref plot. Of course this is (probably one of several reasons) why people use Bouguer plots and evaluate on the ellipsoid. 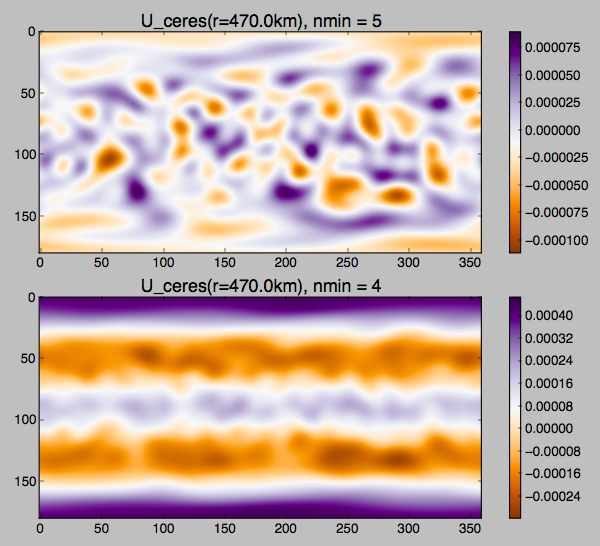 Brandon A. Jones wrote an excellent summary of the different formulations and methods to compute spherical harmonics in his 2010 PhD thesis available here. Chapter 2 is especially of interest. You may also want to read Fantino & Casotto 2008 "Methods of harmonic synthesis for global geopotential models and their first-, second- and third-order gradients", which proposes a slightly simplified computation of the harmonics.

Important: the frame in which the harmonics is computed is a body fixed frame. In the case of Earth, you'll use the ECEF frame (cf. Chapter 2 of G. Xu and Y. Xu, GPS, DOI 10.1007/978-3-662-50367-6_2 -- which is open access -- for a through computation of that frame from an ECI frame using the IAU2000 framework). In the case of other bodies, and Ceres in particular, you'll need to create a body fixed frame. This GMAT documentation may be of help.

I came across a similar problem myself a few weeks ago. In terms of the normalization, and at least in the cases of the Earth, Moon, and other kernels available on PDS Geosciences Node, the SHADR files contain the normalized spherical harmonics. Similarly, the EGM2008 Tide Free model also contains normalized harmonics. This greatly simplifies the computation since you do not need to recompute harmonics with factorial math.

The verification step should be quite straight-forward, but the validation isn't. The process of verification, in my experience, consists in making sure that things are implemented correctly: one checks the coded math, and that all the block fit together. The validation step however, is more complicated. There, you want to make sure that the right thing was implemented, i.e. despite the math being right, is the correct frame used to compute the effect of the spherical harmonics on the orbiting vehicle.

As discussed above, both the SHADR and SHBDR files store the normalized coefficients. Hence, one method of validation, which I've opted for my upcoming tool, consists in rigorously comparing results of the same scenario with another known validation tool. In my case, I'm using NASA's GMAT and GMAT used STK and others. Specifically in the case of GMAT however, I do not think it's possible to import SHADR files. So you'll need to convert it to the support COF file, or find another propagation tool which also allows you to turn on and off specific dynamics (in this case you'll want harmonics turned on to a given degree and order, but only Ceres as a point mass).

Not the answer you're looking for? Browse other questions tagged gravity mathematics ceres or ask your own question.

4
What is the formula for Legendre Polynomials from EGM96 calculated in F447.f program?
5
How open is NASA's "open source" GMAT software?
6
Measuring the effect of Earth tides
4
Where can one find the accelerations due to high-order terms of the geopotential model?
5
JGM-3 vs EGM2008 coefficients
8
Zonal vs Tesseral part of geopotential?
6
How are the coefficients in the EGM96 model normalized?
3
Earth geopotential effect on orbit propagation
4
Is Dawn's upcoming low periapsis orbit for XMO7 "resonant"?
0
CSM velocity / apollo program
See more linked questions

14
How does the gravity of a massive non-spherical object act on things around it?
5
How can gravity gradient forces be calculated?
14
Converting Orbital Elements to Cartesian State Vectors
2
Ceres gravity from spherical harmonics from Dawn, how to get the coefficients, definitions and potential?
2
How to achieve escape velocity from Ceres?
2
How does a rocket go from gravity turn to orbit?