Is there any economical way to move the water from the Martian poles to the people?

update: Water at the poles has some more recent news:

I just wrote a comment that includes the following sentence:

I think the J. P. Morgan of Mars will get rich shipping water from the ice near the poles to the people near the equator where it's sunny.

But I was being whimsical and not thinking it through.

While there is oxygen everywhere in the atmosphere (in the form of CO2) water for drinking and growing food (carbohydrates!) and for hydrogen for fuel (and perhaps other uses) on Mars might really need to come from water ice near the poles.

If regolith near the poles is say 20x more hydrated than near the equator where it's "warm and sunny" (also important for growing food), is there any even remotely, potentially economical way to move the water from the poles to the people?

"Economical" I suppose would mean that it takes 20x times less excavation and processing resources per kg of water, but more resources to move it to where it's needed. Even more because it may be nonlinearly more difficult to extract any water from nearly dry 2% rock than from a nice juicy vein or layer of polar ice.

below: Here's an upload to Wikimedia; click for full size. 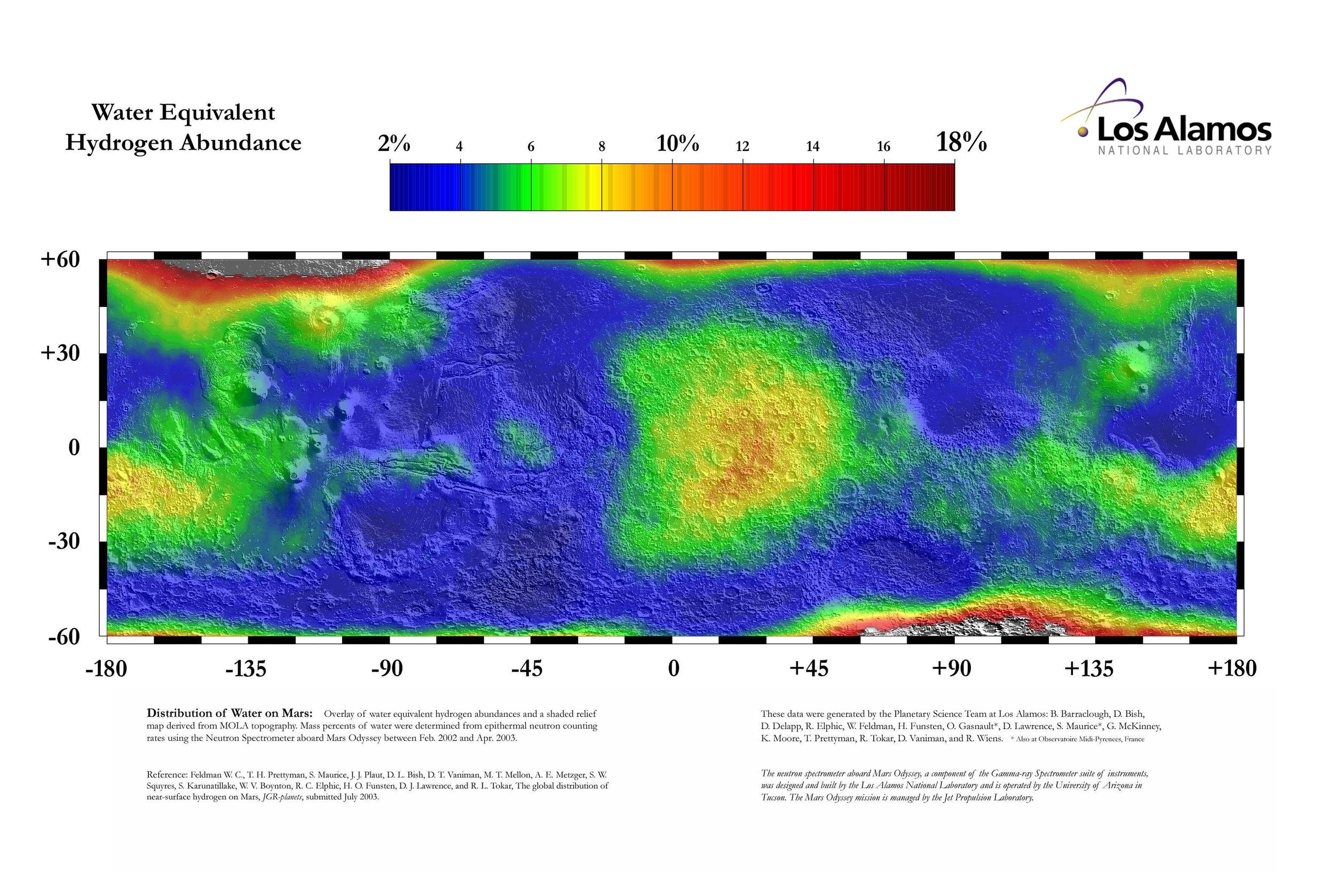 You don't care about transporting H₂O. You want to transport hydrogen and oxygen atoms, and if that includes a few other atoms as baggage, that's no big deal. One easily available atom is carbon, as it can be extracted from CO₂.

So you need two pipelines. Hydrogen has the nasty property of escaping pipelines, so you need to bind it to carbon to produce CH₄. (Methane). It freezes only below 90K, which is not going to happen even on the poles. Oxygen can be transported as just O₂. It won't freeze either.

So, you need H₂O, CO₂ and a lot of energy to produce the CH₄. That's where you need nuclear energy; solar power isn't a good option near the poles. On the plus side, at your base you get a CH₄+O₂ stream that you can pour straight into a fuel cell. This recovers the H₂O and CO₂. You also get electricity and heat, which are also valuable, without having a nuclear reactor near your base.

Note that CH₄ and O₂ are also incredibly useful for a lot of other chemical processes. There will be a need to produce plastics, and CH4 is a reasonable source material for that.

It's too cold on Mars for water to be liquid, so canals are not going to work.

...would need to be constantly heated, so they would require quite a lot of energy.

The atmosphere on Mars is very thin. Hydrogen zeppelins would work in theory, but they would generate even less excess lifting force compared to their size than on Earth. But there are some interesting proposals for using balloons for mars exploration. Here is a paper about the topic.

You mean the Automated Transfer Vehicle from ESA? It might be better to use a cargo module which is actually designed to land.

But suborbital rocket flights for cargo transport might in fact not be as stupid as it sounds. The lower gravity and thinner atmosphere on Mars make them far more viable than on Earth. And you could repurpose a lot of the rocketry hardware which brought you to Mars in the first place.

...or do you mean in fact "All Terrain Vehicles"? Transporting cargo by rover will likely be the default solution for a while. An autonomous rover would take about a week to bring a load of ice from the pole to the equator. But it will be hard to design a rover with a range of 5000km, especially without fossil fuels.

But if you have a Mars colony of a sufficient development level that you have large-scale metallurgy capable of manufacturing thousands of km of steel rails and enough need for ice to justify the project, then it might be worth considering.

You don't need to. There's a lot of subsurface water ice at many mid-latitude sites, where that ice is easily accessible -- only a few meters down, sometimes even exposed, and mostly pure.

In addition to other answers, while most of the time Martian temperatures average below zero, they reach positive side of the Celsius scale every day on most of the surface. That means that pipes with enough freeze-proof storage tanks interspersed throughout their run, and active pumping (draining pipes dry at night) should in theory allow a cheap and reliable, but slow transport of water step by step, or rather - tank by tank.

I'd propose putting enormous LFTR reactors on the poles and build a big pipeline around the entire diameter or mars. You dump the waste heat from the reactors into the ground to sublimate the CO2 out of the ground and thicken the atmosphere (still below the armstrong limit but every little bit helps). You use the tubes for 5 purposes:

The electromagnet will help to retain the newly thickened atmosphere and shield people from radiation. The data lines will keep the citizens happy with fast internet. The supply pipeline can be used to transport water, fuel, whatever around the planet, the particle accelerator will get scientists more interested in going to mars (read: more funding). Fission byproducts of a lftr reactor give you industrial exports (krypton-85 is a great ion engine fuel, iodine-131 and cesium-137 have medical applications, Plutonium-238 is useful in RTG's, etc..) Boom. You have a martian economy and some groundwork laid for terraforming.

I see that many other answers or realistic propositions have been made. I would like to propose a rather out-there kind of idea. So the concept is that you could gather ice in some sort of bin with a deployable parachute large enough in size to slow the decent to an adequate speed in the Martian atmosphere. This bin could then be launched from near the poles via some sort of explosion. My guess is that the best bet would be to perform electrolysis to separate the water and recombine it to produce the desired explosion or crude fuel for a thruster. I am trying to gather information about the energy required to perform such a task here. Once that is accomplished, I could run a rough cost analysis. I will update this answer as soon as I can do so.

Note: This answer is not intended as an actual proposition, but is mainly created with the goal of having a place to present my analysis of this concept. Depending on the cost analysis, it may prove to be a legitimate solution to this transportation problem, however, it is likely far from the most efficient.

It's a one-way ticket too. You want to be cultivating an ecosystem, and the water you pump into that ecosystem will be recycled. I've not really seen anyone else mention the fact that once you start bringing ice in from the poles (or wherever), there will begin to be an excess of it where it is being transported. For any long-term Mars solutions water processing plants and likely hydrolysis plants will be absolutely required. Once water has been moved to a settlement, and the levels of reserve water stabilize for the current population, there will be no need for additional water resources until more population arrives. The ISS is a great case study of this, it doesn't even have polar ice caps to mine, but you don't see the astronauts paying out the nose for bottled water either (hah, they pay in pee!).

It wouldn't be a J.P. Morgan style enterprise. I'd assume it would be more of a collective communal pool of resources until the surface of Mars was sufficiently populated. Even then, leaks could be minimal in terms of storage (liquid H2O). But you're right, anything dealing with low density gasses would be a constant replenishing war. I was just pointing out that to get to the point that a company had a monopoly on water we'd need a very large population density (colonization level, not outpost level).

It might be cheaper to mine water (ice) on Ceres. Delta-V from Ceres surface to Mars transfer is less than for the suborbital hop from Mars pole to equator (according to the spreadsheet I got from here) and you could use an ion drive or mass driver or something for the main boost, since you aren't in a hurry to get out of a deep gravity well (Ceres escape is about 500 m/s).

Of course there is the problem of stopping again. Your ice blocks will be coming down at rather more than Mars escape velocity. I still quite like the idea of flooding a crater (and then letting a few meters of ice form on the top). The incoming ice shipments keep the bulk of the lake liquid (if you schedule them carefully) but the ice crust will reform pretty quickly and stop you losing too much by evaporation. You can probably use some of the heat from the lake to warm your habitat as well. Of course it is very important to hit the lake and miss the habitat.

7
What's the scientific evidence of water for return trip methalox on Mars?
8
If we got to Mars right now and landed at the poles (where there is a lot of water ice) how long would we be able to stay there?
8
Sources for make-up breathable oxygen on Mars; of H₂O, CO₂ and ClO₄⁻, which is likely to be used first?
6
Where exactly are those eight steep slopes on Mars revealing structures of buried ice?
5
How to calculate the delta-v necessary for a suborbital "transfer" of ice from Mars' pole to equator?
4
What are the technologies that can identify, validate, and quantify water-rich locations on Mars?

10
How much oxygen and hydrogen are in the soil of Mars?
6
Are NMAs (Near Mars Asteroids) common and useful for exploration?
20
Curiosity is still dirty! How will the ExoMARS Rover keep its solar panels dust-free and collecting sufficient power?
5
Is unpurified Martian ice/water safe for irrigation?
4
What are the technologies that can identify, validate, and quantify water-rich locations on Mars?
13
Are there any possible methods for keeping surface water on Mars?
13
Mars versus the poles of Mercury WRT colonization
5
Why aren't there HiRISE observation footprints near the Martian poles?