Has the ISS ever not had a lifeboat?

The International Space Station typically has one or more (manned) spacecraft docked. This is obviously to ferry crew to and from the station for each of the Expeditions. The Soyuz currently fulfils this role, but during its operation the Space Shuttle was also used.

In the event of an emergency the docked craft can be used to evacuate the ISS and return the crew safely to Earth.

At any point has there ever not been the capacity for a full evacuation?

Common sense says no - every crew member went up in a seat therefore there should always be one available for them to evacuate. Also crew safety is clearly the primary concern.

However, not all launches are full, not all landings are full and some astronauts stay for multiple Expeditions, meaning the number of crew doesn't always match the number of available seats. This assumes that a full evacuation means every crew member has a seat.

NASA had a plan for a permanent escape vehicle, but this was cancelled.

Edit: I'd like to be certain that there were no situations (for example during relocation of a Soyuz craft - though this case has been addressed). We can also ignore EVAs where technically prompt evacuation would have been difficult. Granted, this may be difficult to prove definitively.

Edit 2: Although the conclusions seem pretty clear, I'm still not entirely convinced that there was never a short period without full evacuation capacity. There is some good discussion on NASASpaceflight on the rationale behind always ensuring evacuation. This paper also details the studies into a dedicated ACRV.

In the absence of an official word from one of the organisations involved, or unless someone can find a cross-referenced chronology of all astronaut activity, I'll accept the top answer as it's certain to be correct!

It never actually happened, but there was a case when this situation had the potential for happening.

That was the last shuttle flight, STS-135.

If a critical flaw in the thermal protection system of the Orbiter had been detected, the shuttle crew would have had to hang out in the ISS until they could be rotated home using spare Soyuz capability. They all got measured for the custom Soyuz seat liners to cover this case.

This was because there was no more available Orbiters for a rescue flight!

The stay could potentially have been quite long for the last crewmember, months, maybe a year if I remember correctly.

This was a major reason for having the final crew size be only four astronauts.

Reference 1 - Houston Chronicle (may not be available in some regions)

No. There has never been a point where a crew member had no way to 'leave'.

Even when the Shuttle did crew transfers, they took back 3 and left 3 behind or some combination of that approach.

The Soyuz capsule needs custom seat liners for each passenger, since landing is somewhat hard, and wrinkles and bumps will hurt a lot.

Part of finalizing the crew transfer is when they move their seat liners into their appropriate Soyuz capsule.

When the Russian segment crew is reduced to 2, from three that leaves a seat open for a possible tourist or other country to pay for a short visit. In those cases, the new Soyuz typically arrives and later the old Soyuz leaves. Thus the tourist hangs around for a week or so till the old Soyuz is set to land.

For the entire time that the ISS has been occupied, there has been enough transportation to return to Earth. The only instance where anything different might have occurred was if there was a Soyuz mission when a Space Shuttle was docked. We can see the spacecraft that have visited at this chart. Wikipedia lists the number up/down from each Space Shuttle mission. STS-121 was the only mission that left more people at the ISS then it brought there. Prior to that mission, there were only 2 astronauts on the ISS. STS-121 left 3.

It seems to me that every Soyuz capsule has brought the same number of people that it took with it. Thus, there has always been a lifeboat.

For bonus, here is the number of seats on Soyuz/ Space Shuttle docked to the ISS at any one time. 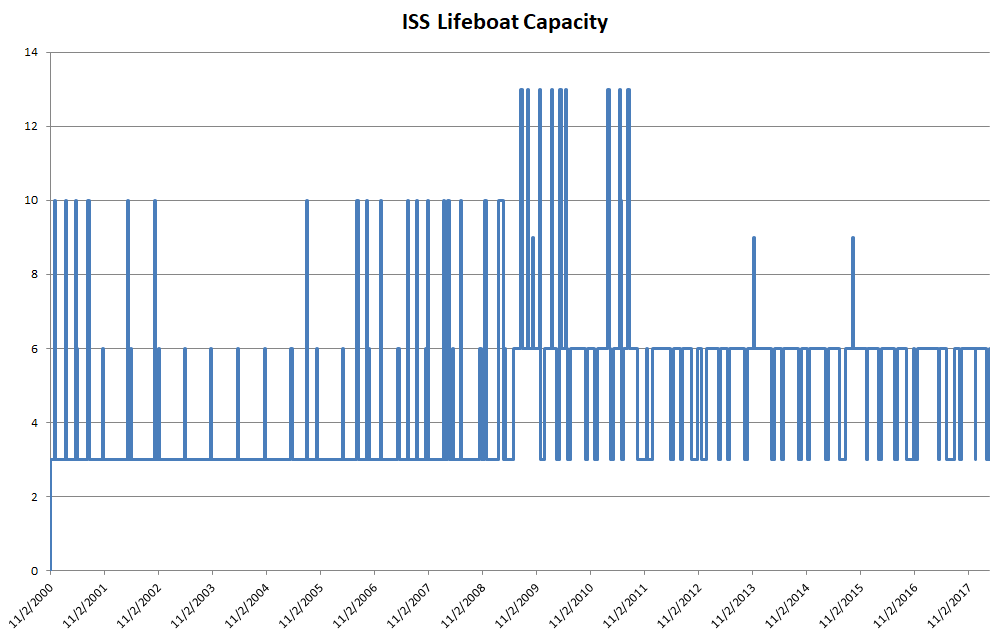 27
How many times has there been 13 people inside the ISS and is it hard on the station?
12
Have space station occupants always had a return vehicle ready?
16
How fast can the crew evacuate the ISS? (ACRV)
15
How many people have returned to Earth in a different type of vehicle than the one that launched them into space?
13
What do the astronauts do whilst the air-lock cycles?
3
Why will Soyuz MS-04 bring only two crew to the ISS?

8
What module(s) on the ISS do the Soyuz dock to?
3
Why will Soyuz MS-04 bring only two crew to the ISS?
6
Soyuz seat - return
10
What does Soyuz's button-pushing "fancy stick" look like? Are there others?
19
Does the Soyuz spacecraft use chemically stabilized hydrogen peroxide (H₂O₂) to remain ISS-dockable for 200+ days?
3
Where is the hole now? (ISS/Soyuz spacecraft hole)
5
Why will the Soyuz MS-17 be relocated on the ISS?
0
Has an astronaut ever gone into a docked capsule to take a photo out one of its windows?
8
What size hole in the International Space Station would be catastrophic?