Venus vs Mars for colonization

Why is Mars getting so much attention vs Venus, which to me seems like a much more attractive option, in regards to habitability.

I've read that the upper atmosphere of Venus has the most Earth-like conditions in the solar system, also terraforming seems pretty straightfoward.

Not sure if this is allowed but Convince Me 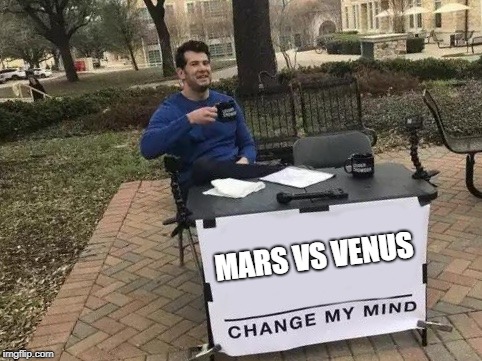 The reason Mars gets more attention than Venus is because we could walk on Mars. Our current technology can handle Mars. Venus on the other hand everything dissolves in a few hours from the heat and acid which makes it a terrifying planet to visit.

But on the subject of terraforming. Terraforming is still very much sci-fi and far off from any fact. We are talking about resource allocations on a planetary scale. But I have been looking at both and I too agree that Venus is more terraformable than Mars. Unlike Mars which has a litany of problems to overcome, Venus has just one, it is too hot.

But geologically and chemically Venus has more favorable conditions than Mars.

But for a species that is currently having a heat crisis of its own homeworld, I think we are far off from being able to fix that.

Leaving aside the terraforming question, having a floating habitat is non trivial since pretty much the only thing that is earthlike at the proposed altitude is the temperature. The pressure is very close to the death zone, the winds are cyclonic and up to 100m/s and the atmosphere contains sulfuric acid.

This can work for a scientific mission where you arrive, deploy a limited lifetime balloon and abort to orbit when resources run out, you get blown into a cyclonic region or anything else goes wrong but a permanent habitat has to persist hopefully forever in that environment and becomes a lot more complicated, where the need to remain afloat at an altitude approximating 18000 feet on earth while surviving turbulence means that your weight will be critical (think living in an RV/caravan, not Bespin mining station).

There are some things that will kill you on the moon/mars but not Venus (lose of power to heating/cooling, and leaks will be slightly less urgent) but you also do not have handy access to a surface to keep spare parts on, mine from, bury your reactor in or just to keep your two domes in the same position with respect to each other.

I agree with some of the comments, terraforming should not be considered a serious target at this early stage of solar system colonization.

Both Venus and Mars have their problems, but what make the real difference is our lack of experience in missions that are not surface-based, since on Venus we should colonize the upper atmosphere layers. With Mars we can reuse what we learned from the Moon.

Terraforming is not necessary for colonization, but: Venus requires importing about 40 quadrillion tons of hydrogen to lock up enough of the excess carbon and oxygen in its atmosphere in the form of water and biomass before its atmosphere can be thinned down enough to make the surface easily survivable.

Mars may have enough trapped volatiles to allow walking around on the surface in an oxygen mask, just by warming the planet up. A low-pressure breathable oxygen atmosphere could be built using oxygen sourced from rocks, with a byproduct being enormous quantities of metals and silicon.

Colonizing anywhere is going to involve moving large amounts of material, and ideally you'll want to get multiple trips out of the spacecraft used for the job.

Landing large amounts of mass on Venus requires heat shields and parachutes, and enormous air-deployed balloons if you want to avoid the surface.

Venus has nearly as deep a gravity well as Earth, and a much denser atmosphere. Launching spacecraft from Venus requires a multi-staged launch vehicle just like you'd need on Earth, except it needs to launch from a balloon floating in the atmosphere. A fully reusable Venus transport is basically impossible with any available technology.

Landing large amounts of mass on Mars requires heat shields and rocket propulsion. Small payloads can get some use from parachutes.

Launching from Mars is far easier than launching from Earth or Venus. A spacecraft that can launch from LEO and land on Mars can easily have the propulsion capabilities needed to launch back to Earth for another mission, if it can refuel on the surface. And Mars has the raw materials needed to produce propellants.

Venus would require buoyant habitats drifting through skies filled with concentrated sulfuric acid mist. Surface robotics would have to be built to tolerate conditions where common solders melt, aluminum alloys soften, and most plastics evaporate.

Mars requires little more than a pressure vessel and the life support you'll need anywhere. There'll probably be active temperature control, but it would be feasible to keep things survivable passively. In terms of temperature and radiation, it's a better environment than LEO. Mining equipment can use much the same materials and designs as it does on Earth...the big difference is that you'll probably run a coolant loop through a radiator for a lot of things that would use air cooling on Earth.

The only things easily acquired on Venus are components of its atmosphere: CO2, N2, SO2, H2SO4. The surface appears to be entirely volcanic, basalt as far as the eye can see (about 3 km under surface conditions).

Mars has a lot of basalt too, but it has had enough tectonic activity to give it a more Earthlike variety of igneous and metamorphic rocks, and a long enough history of liquid water to form all sorts of interesting concentrated minerals. There's clays, useful salts...one of our rovers got stuck in a patch of powder that appeared to be iron sulfate, and there's going to be similar deposits of copper minerals and other stuff you're going to need to actually build anything.

Let me approach your statement from the comments:

with regards for surface mining, it wouldn't be impossible to design mining drones that work on the surface.

No. Currently, any continued operation would require continuous use of large amounts of consumables - say, evaporating water - to sustain cooling of such a drone. Sustained operation is outright impossible.

State-of-the-art vapor-compression refrigeration systems (most energy-efficient method we know) have coefficient of performance equal about 4.5 src - that means for 4.5 kilowatt of heat energy transferred, they produce 1 kilowatt of waste heat. The typical temperature gradient achievable at this energy-optimal operation is around 65 °C (same source). 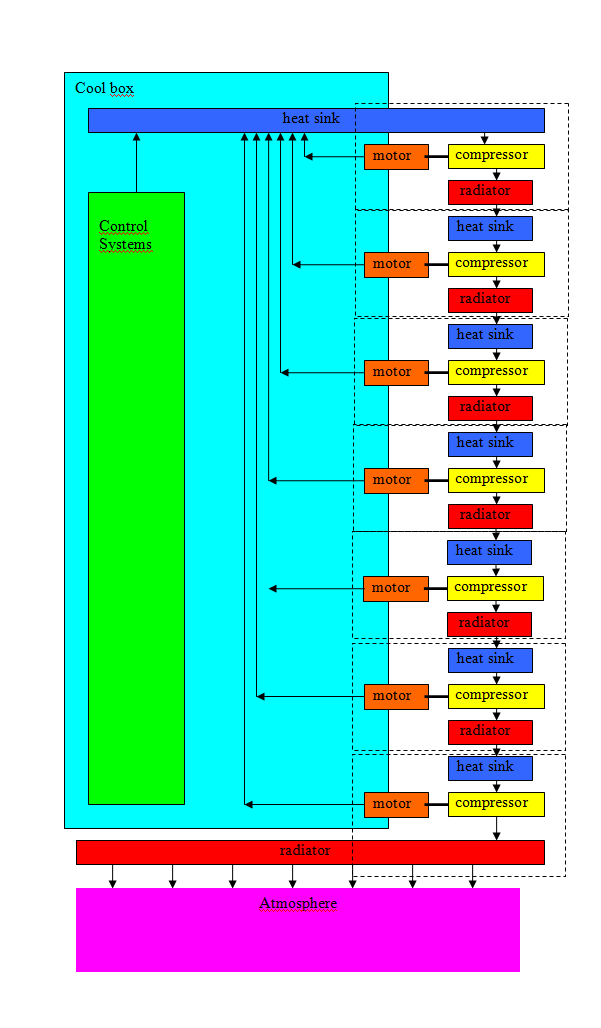 Unlike all cryo-coolers that operate on Earth, in ambient temperature just fine, this thing needs to account for all the heat produced by its own operation.

That means, our nice COP of 4.5 kW transferred for 1 kW of waste heat produced means in fact that 1 kW eats into our heat budget - we need to transfer it out, and subtract it from what we have at our disposal, to cool the control systems. We're left with 3.5 kW for actual operation needs - and that's just from one motor, one stage.

After four stages, we've produced 4 kW of waste heat, we have 0.5 kW left to cool the system, and we've dropped the temperature from 480 to 220 °C. That's still too hot to operate.

If we add the remaining three stages, out cooling system produces 7 kW of waste heat while still removing 4.5 kW - it's no longer cooling the drone, it heats it.

If we managed to get a cooling stage of COP=7, then we'd (barely) break even, 7 kW produced, 7 kW emitted, no room left for systems - so in fact the efficiency must be higher than that. The maximum theoretical COP for cooling is 7.8 , and we're nowhere near technologically to reach it. And even if we did, that would leave 10% of the drone's energy usage to everything else than cooling - e.g. mining!

Venus would be easier for multiple reasons. It takes less fuel and time to get there. Hydrogen is much more buoyant there than on Mars and can be used to float a craft 90 miles above the surface where atmosphere pressure is equal to Earth and it's only 120-140 degrees F. Building materials that are not corroded by sulfuric acid are available. You will be able to bring larger payloads with you and Earth can send more unmanned payloads per dollar and park them in orbit until they are needed. 3d printing will make available all the spare parts you need. The reason we are more likely to to Mars first is because the long term habitation of it is more feasible, we won't be mining Venus for raw materials so any habitation of it would be for purely scientific research purposes. Terraforming is out of the question untill we can automate to process completely. The tech required to build a payload that could use machines that mine asteroids and build more machines to do the work, eventually building giant Solar shades for Venus or Mirrors for Mars, ect., All without a space based human workforce and nothing more than an initial cost, is not unfeasible.

With terraforming the planets Mars is ... impossible, the gravity of Mars isn’t strong enough to keep enough air and water in it from solar winds and currently there is no way to prevent that decay, so a permanent self sufficient terraformed Mars colony is impossible.

Venus however has the atmosphere can can support the changes for the end of time, however it requires much more complicated work to terraform the atmosphere than Mars would.

Venus would be able to support a second earth and Mars can’t granted that the knowledge, technology and will to do so comes

The biggest problem is Mars has no magnetosphere because its core has gotten too cold. It’s basically pointless since you’ll die of cancer within a few years as has just been recently pointed out that Mars missions should be less than 4 years in length. There is no feasible way to solve the magnetosphere problem. Given what others have already pointed out about Venus, I would say it’s a much better target for colonization. Still the timescale would be hundreds of years into the future so establishing equilibrium on Earth in terms of population and renewable resources should be the top priority…

24
What cooling improvements did the Venera missions make?
14
Why not bring life to Venus along with the next exploring mission?
5
Titan vs Mars for colonization

20
Would terraforming Venus destroy its ionosphere?
14
Why not bring life to Venus along with the next exploring mission?
4
Could the sulfuric acid in the atmosphere of Venus be heated enough by concentrated sunlight to create water and oxygen?
4
Could H₂S₂O₈ (peroxydisulfuric acid), made in the clouds of Venus, be used for making a propellant?
4
What is the atmospheric composition of Venus at the 34 mile (50 km) altitude of the proposed HAVOC program?
7
Harvesting Venus' atmosphere to Terraform Mars