This question was initially inspired through playing Kerbal Space Program, however I am seeking a more general answer.

I've been playing the excellent Near Future Propulsion mod for KSP, using theVASIMR engine. For those not in the know, a VASIMR engine has variable thrust - A low thrust-high isp option which is suitable for deep space travel, and a high thrust-low isp option which is powerful enough to lift off from smaller solar system bodies.

At what point in the process of taking off does it become optimal (in terms of delta-V) to make the switch over from high thrust to high isp? Would the optimum change be gradual or sudden?

My intuition is that for as long as you're on the ground or on a sub-orbital trajectory, you must accelerate as fast as possible to enter orbit, and once in orbit, switch to low thrust-high isp. It is not clear to me, once you are on a trajectory that is not quite an orbit but is only a few m/s off, is whether the changeover should be sudden or gradual. I suspect there would be a curve describing the optimal delta-V usage depending on the specifics of the engine.

I've done the requisite maths to be able to answer my own question. The answer turned out to be surprisingly simple and amenable to calculation.

Your spacecraft is standing on a small, airless, perfectly spherical planetary body.

Your spacecraft has a variable $I_{sp}$ engine which operates at a constant power $P$. The thrust force and exhaust velocity are governed by the following equation $$ P =Fv_e $$ where $F$ is the force (thrust) of your engine and $v_e$ is the variable exhaust velocity. Increasing $v_e$ increases the fuel efficiency, but comes at the cost of thrust. Thrust is inversely proportional to exhaust velocity. $$ F \quad \alpha \quad \frac{1}{v_e}$$

You want to get to orbit as efficiently as possible. Once you are in orbit, you can take your time with maneuvers, and you can set your $I_{sp}$ to be as efficient as possible. While in suborbital flight, you have no such luxury, as time is not on your side. You must accelerate to orbital velocity $v_o$ as quickly as you can or else you'll crash.

It is generally agreed (at least in the KSP community) that the best way to get off an airless body is to boost upwards till you've cleared local topography, then boost as hard as you can for the horizon. The orbit should be as low as possible without crashing into terrain. In my perfectly smooth sphere solution, this orbit is placed a negligible distance above the surface.

This makes for a simple vector diagram. After a negligible boost into the air, the spacecraft is gliding over the surface. The total acceleration $a_t$ is separated into a vertical component $a_v$, which is exactly counteracting the acceleration from gravity, $g$, and a horizontal component $a_h$ which is the one contributing to the overall orbital velocity. 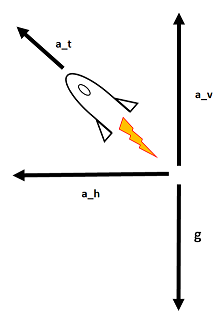 $$ a_t = \sqrt{a_h^2 + a_v^2} $$ $$ a_v = g $$ $$ a_h = \sqrt{a_t^2-g^2}$$ The total acceleration $a_t$ can be derived from the thrust of our engine and the mass of the craft $m_t$ $$a_t = \frac{F}{m_t} = \frac{P}{v_e m_t}$$ and the time taken to reach orbital velocity $v_o$ is: $$ t = \frac{v_o}{\sqrt{a_t^2-g^2}} = \frac{v_o}{\sqrt{(\frac{P}{v_e m_t})^2-g^2}}$$ At this point, you can sort of see what the problem is. At one extreme, the acceleration is very high and so therefore most of it goes towards reaching orbital velocity. This is an efficient use of propellant. However the force required to make this acceleration is so high that the engine needs to operate very inefficiently, nullifying your efficiency gains. At the other extreme, even though the engine is running efficiently, the thrust is so small that most of it is spent fighting gravity, and the residual horizontal acceleration occurs at a snails pace. It takes a very long time to accelerate to orbital velocity, and in the meantime you've actually wasted most of your fuel just fighting gravity. There is a hard limit where $a_t$ is equal to or less than $g$, and in that case, your spacecraft just isn't going anywhere. It can't even lift itself off the surface. 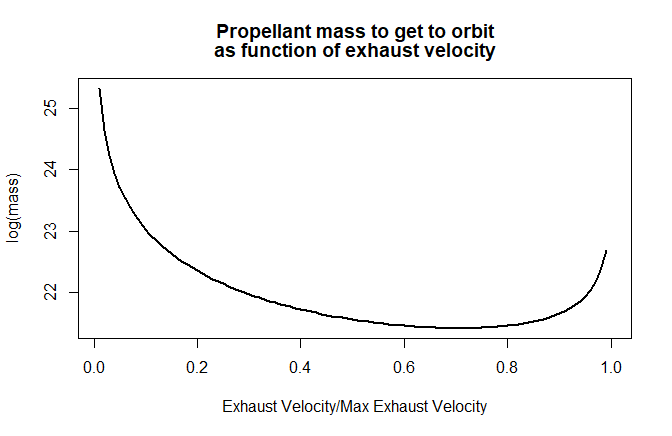 This graph clearly illustrates the behaviour of the function and the location of the minimum. The 'max exhaust velocity' is $\frac{P}{m_t g}$, and if you plug that into the above equation you'll see why. (it makes the denominator zero)

If we do some quick calculus (left as an exercise to the reader), and make the naughty assumption that the overall mass $m_t$ doesn't change, we find the exhaust velocity that provides the minimum mass loss is $$ v_e(min) = \frac{P}{\sqrt{2} m_t g} $$ which is $\frac{1}{\sqrt{2}}$ times the value of the maximum exhaust velocity.

When plugging this exhaust velocity back into the acceleration vector diagram, we find that the optimal angle is $45^o$.

It's also important to note, that while the above optimum was found assuming no mass loss to orbit, it also holds for any instantaneous velocity - at any point in time, given a certain mass, it will give you the most efficient exhaust velocity.

Accounting for mass loss Since the optimum ascent profile seems to be to maintain an angle of 45 degrees while gliding along the surface (effectively accelerating forward with acceleration $g$), any decrease in mass will result in an increase in exhaust velocity, as $M_t v_e$ will be kept constant. This results in a mercifully easy DE to solve. $$ \frac{dm}{dt} = \frac{-P}{v_e^2}$$ and $$ m v_e = \frac{P}{\sqrt{2}g} $$ whose solution for $m$ is $$m = \frac{Pm_0}{2g^2m_0t+P}$$ where $m_0$ is the initial mass at takeoff 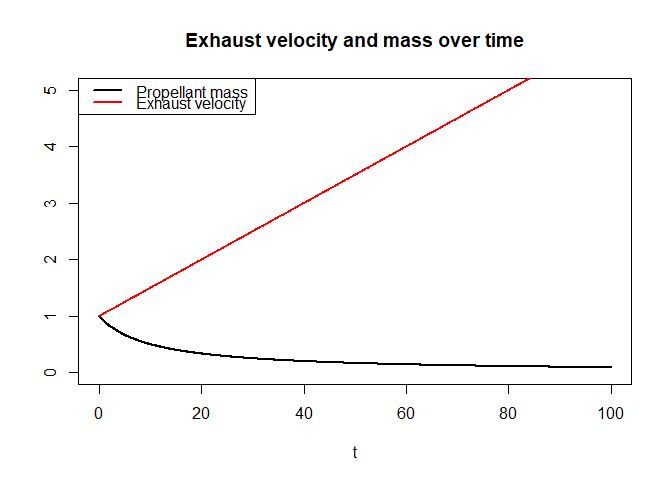 If you're playing KSP and wondering how to ascend most efficiently, burn upwards to clear local topography, then point your nose at 45 degrees and try to adjust your $I_{sp}$ at a constant rate so that you are neither gaining nor losing altitude. You want to be following the red line in the graph above.

And if you're playing real life, either find yourself a very tiny asteroid, or don't use a VASIMR engine, as ~5 N of thrust is pretty abysmal.

7
Can we thrust a rocket from earth using electric power?
6
Can a VASIMR Plasma engine be used to launch a rocket?

9
How do vehicles get smoothly to a circular low Earth orbit?
11
Is it possible to use zinc powder as a NTR propellant?
6
Burn spare oxidizer or carry it along?
5
Why Did Apollo Smoke Twist When Taking Off?
14
Are patched conics (and by induction, KSP) "useless" for simulating ion propulsion?
10
Why do chemical rockets encompass a weird shape on this thrust vs. Isp graph?
6
Do lower pressure pressure-fed rockets get more Delta-V?