Where is Giotto now?

Launched in 1985, ESA's Giotto became the first spacecraft to visit a comet. Since then it has done at least some Earth flybys/slingshots to visit other comets. 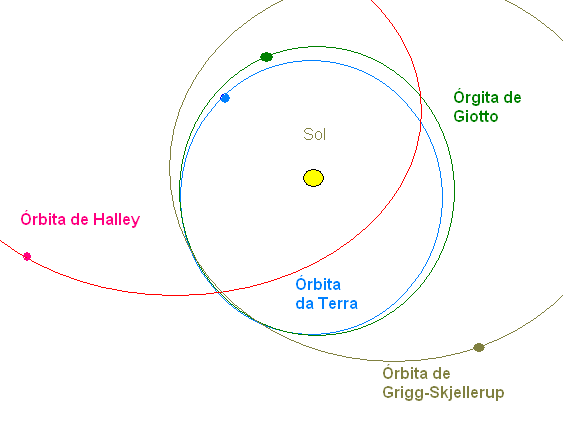 This image from the Wiki article suggests that Giotto was in a Sun-centric orbit that roughly coincides with Earth's orbit. Is it still there, or has the last Earth flyby altered its orbit?

Well, to know that question, someone would have had to track it in the last 20 years, and that hasn't been done. It is fair to say it will still be somewhere in the vicinity of Earth, and I tracked through a few rumors that it might be heading back to Earth around 2016, but the general consensus is that it isn't well known where the spacecraft in fact is.

EDIT: I've learned a lot more about this kind of thing since I originally made this answer, and so let me add a bit more. Many, if not most of the missions pre-internet did a very poor job of publicizing their data. There may exist hard copy printouts of the location of the satellite at a particular point in time. For very short lived, and particularly for non-US missions, this is even more likely to be the case. For Giotto, in particular, the only publicly available trajectory is a SPICE kernel that only shows a few days of data around the closest approach to the comet, not even from launch. I briefly show this in a video I made, included below. What could be done is to make a fit to the provided data that matches with its launch time, and project that information forward. Even a small error, however, could result in a major change if it flies by a planet in that time period, as Giotto has no doubt done several times. The orbital period seems to be around 1.1 Earth years, so about every 10 (Wide guess!) years it passes close to Earth. When it does, if it approaches particularly close, the orbit could be massively changed. If ESA released enough data, it could be determined, but that would be difficult, to say the least, and is far beyond the value of a few fake internet points;-)

Just for an example, I couldn't even get a reliable trajectory if it for its second cometary flyby;-)

Not the answer you're looking for? Browse other questions tagged probe comet esa giotto or ask your own question.

37
Where are Pioneer 10, 11 and the Voyagers ultimately headed?
11
How was the Giotto spacecraft reactivated from hibernation mode?
11
Are any spacecraft heading remotely where Planet 9 is expected to be?
5
Why is comet deflection so hard (and how does a fusion rocket help)?
2
Has Juno now gone faster than - and braked harder than - any other human-made object ever?
2
Where can I find data on current space agency contracts?
3
Has NASA thought about a hub on Mars, where rovers could branch out of?
5
Where did the Herschel Space Telescope go in 2013?
8
Where is BepiColombo?