Why are so many space telescopes placed in LEO instead of at Lagrange Points? And why do we hear about Hubble more than any Langrange-orbit telescope?

Here is the list of every space telescope launched by different space agencies - List of space telescopes. Most of the listed telescopes are placed in Lower Earth Orbit (about 95% of them). It's probably not an ideal location to place a telescope because of many obvious reasons like our earth radiates a huge amount of infrared radiation; as said by professor Michael Merrifield -"Its like doing astronomy with all the lights switched on" .

Now here is the list of all objects placed at Lagrange points - List of objects at Lagrangian points. There are hardly 10 objects at these points. The lifespan of these objects are quite low, but surely there are many upcoming missions in these orbits, the most famous one being the James Webb Space Telescope: 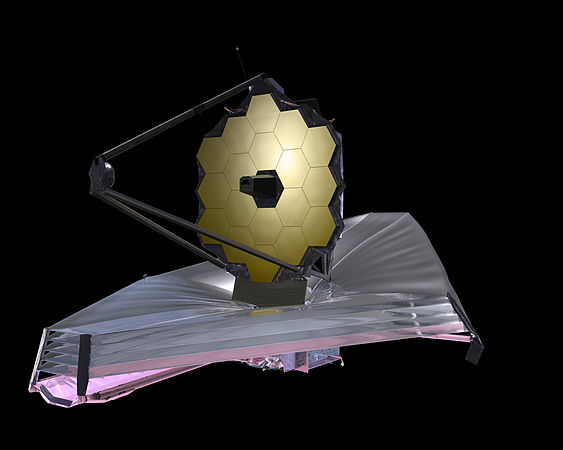 The JWST will be placed on L2 Lagrange point. So clearly this will be the only orbit of choice for many future upcoming telescope missions. So finally concluding I have some questions-

The reason there are so few spacecraft placed at Lagrange points is that it's much harder to get there. Launching sizeable payloads to Earth escape velocities requires a very large vehicle and is simply impractical/impossible for many missions.

For example, at the time of its launch, there was no launch vehicle in operation capable of lifting Hubble's 11000 kg mass even to Geostationary Transfer Orbit, let alone escape velocity.

Furthermore, halo orbits around the L1, L2 and points require ongoing stationkeeping since they are only pseudo-stable. For JWST this is expected to be some 2–4 m/s per year, giving it an estimated operational life of ~10 years.

Comparisons to other telescopes

As to why we hear about Hubble more than any Langrange-orbit telescope; we hear more about Hubble than virtually any other spacecraft. This is because Hubble operates at near-ultraviolet and visible wavelengths and therefore it produces a lot of PR-worthy material. Its well publicised teething problems probably also help Hubble's public image. As pointed out in the comments, had Hubble not been in LEO, the rescue mission to fix its optics wouldn't have been possible.

Compare this to other observatories:

The Chandra X-Ray Observatory (in a highly elliptical Earth orbit), another of NASA's Great Observatories which has an outstanding and lengthy history of discoveries that have provided invaluable data to the scientific community. Its only flaw? It operated (obviously) in X-ray wavelengths, making its observations often less photogenic.

The Herschel Space Observatory which operated at the Earth-Sun L2 for 4 years also provided vast amounts of invaluable data - producing 152 scientific articles in its first year first few months. However in 2013 its supply of helium coolant ran out and it was decommissioned.

The only telescope to challenge Hubble in fame in recent years may be Kepler, which is in a heliocentric orbit (but not at a Lagrange point). Its launch mass of ~1000 kg is less than a tenth of Hubble's which would have limited its capabilities.

Will future observatories use Lagrange points? Possibly, but the launch constraints still exist today. JWST is definitely an exception rather than the norm. It is just within the capabilities of its Ariane 5 launcher and it has a budget beyond the dreams of most observatory programs.

I have included some additional information from the very helpful comments

To add to the existing good answer about the practicalities of launching to Lagrange points, it's also worth considering why the missions which have gone that far are using the unstable Lagrange points, when L4 and L5 are stable.

It comes down to what happens if the satellite loses control. In unstable Lagrange points, if the satellite gets fried somehow then it'll drop out of the Lagrange point and eventually find its way to Earth or the Sun and burn up. And if it gets close to losing control, NASA (or whoever) can command that deliberately. Heading towards the Sun would be the choice, because we already have enough random crud around us.

If it's in a stable Lagrange point though, you'd need to give it escape velocity out of there. That requires the satellite to have a large amount of fuel kept just for this and to still be in full control. If not, you just end up with a random piece of junk stuck at that Lagrange point which you can never shift. In general, this is a bad idea.

The other thing is you need more power to transmit large amounts from the Lagrangian points so that requires bigger solar panels hence more mass.

Another reason Hubble is in LOO is that the technology was essentially that of a spy satellite but pointing the other way! As they found out soon after Hubble was launched the satellite vibrated when the solar panels were heated and cooled – the US intelligence community were aware of this problem with the particular type of solar panels but did not inform NASA.

In addition to the other reasons: a Lagrange point has advantages for some telescope types, but less so for others.

Earth is bright in visible light, IR and some radio wavelengths, less so in gamma and X-ray wavelengths.

Each telescope has a mission or several. The selection process balances the expected scientific benefits with the cost. Although this balancing is far from perfect, the fact that it takes more delta v to get to the Lagrange points is against putting telescopes there. This can be presented as either a higher cost to get there or less mass that can get there with a given rocket. Many of the space based telescopes just want to be above the atmosphere to avoid the absorption of the wavelength band they operate in. The main reason to go to the Lagrange points is to avoid heating from the infrared emitted by the earth. That is important for infrared telescopes, where cooling is critical to avoid noise. For telescopes in shorter wavelength bands it is hard to justify the added cost of the Lagrange points. It is true that at the Lagrange points the earth represents a much smaller solid angle so you can see more of the sky, but from low earth orbit you can see any given point of the sky some of the time.

Not the answer you're looking for? Browse other questions tagged lagrangian-points observation space-telescope hubble james-webb-telescope or ask your own question.

16
What are the sources of light at L2? How will the James Webb telescope be powered?
8
Why have JWST in a Sun-Earth L2 halo orbit?

37
Why should the James Webb Space telescope stay in the unstable L2?
19
The JWST - What happens if/when it breaks?
4
What viewing angles does the Hubble Space Telescope use during its orbit in LEO, avoiding the Sun and Earth?
18
What's the largest aperture telescope sent beyond the Earth-Moon system?
15
How many satellites can stay in a Lagrange point?
5
Why put X-ray telescope Spektr-RG/eROSITA all the way out at Sun-Earth L2?
8
Why have JWST in a Sun-Earth L2 halo orbit?
7
What exactly gives a larger field of view to the donated "spy" telescopes that NASA may send to Mars? How much larger?