What is the largest delta-v ever produced in space from mechanically stored energy?

The math behind this answer suggests that while the delta-v delivered from hand-throwing an object from the ISS would not produce prompt de-orbit and atmospheric reentry, it would still lower the periapsis by tens if not a hundred kilometers (depending on the flexibility of the space suit).

I humorously but quantitatively suggested that a hand-held slingshot device (not the gravitational maneuver of the same name) would be sufficient.

When satellites are deployed from their upper stages, usually some kind of small impulse ensures the separation is clean, well controlled and certain. From the video's I've seen the separation velocities are often of the order of a meter per second. I'm guessing this impulse is often produced by springs or other devices that store mechanical energy.

I'm wondering if mechanically stored energy has ever been used to produce a delta-v substantially larger than this, perhaps 5 or 10 m/s? More?

Question: What is the largest delta-v ever produced in space from mechanically stored energy?

For the purposes of this question, energy stored as a compressed gas, or phase change wouldn't count. The source of energy should be something along the lines of springs or other elastic material held under mechanical stress or rigid body phenomena. Also while I'm primarily interested in intentional events, unintentional events might also apply.

edit: since there are several comments about rotation, I'll say it explicitly that energy stored as rigid body rotation is also allowed, and two (or even a few) objects connected by a line under tension would count as a rigid body rotation as well, for the purposes of this question.

GIF from Scott Manley's video The Antares Rocket - NASA's Less Famous Ride To The Space Station showing a stored energy device imparting a delta-v between the first and second stage of an Antares rocket.

Space Shuttle mission STS-75 deployed a satellite on a 20.7 km tether. As the deployment neared completion at 19.7 km, the tether parted (due to a complicated chain of events starting with manufacturing defects) and the satellite flew away at a relative rate of ~ 10 m/s. 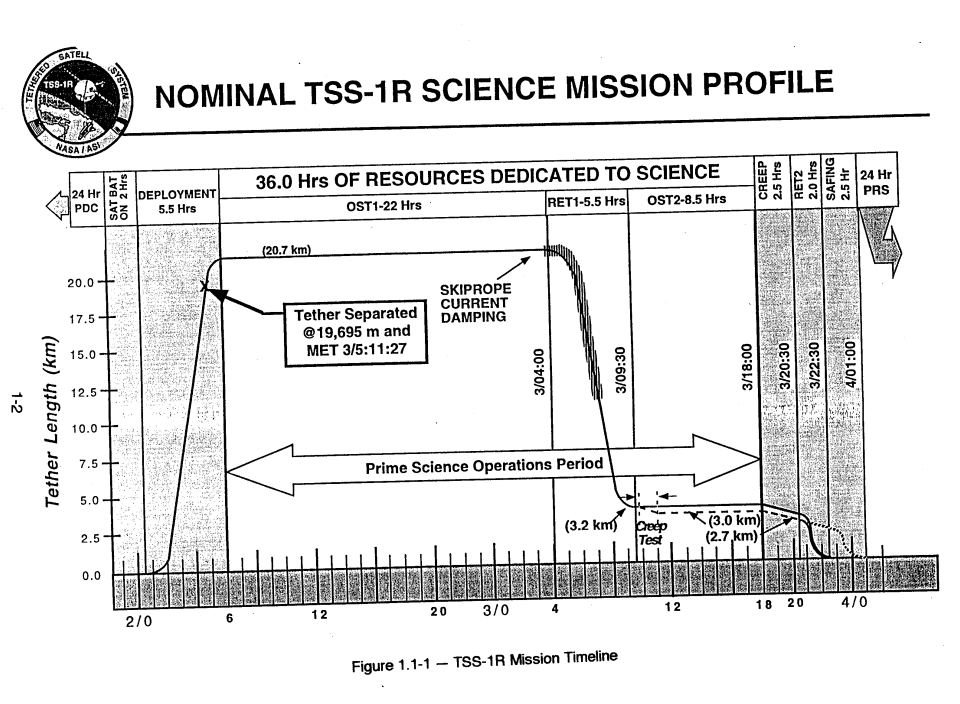 The spent S-IVB stage was intentionally guided on a collision course for the lunar surface where it experienced a change in velocity of 2.58 km/s through what could accurately be described as "rigid body phenomenon." The purpose of colliding this stage with the lunar surface was not solely as a disposal method to avoid space junk, it provided unique calibration signals for the Apollo passive seismic experiment.

Apollo 13's S-IVB was not the only time a spent upper stage has been crashed into the moon in the name of science, but it is the fastest as far as I could find. Others include several of the S-IVBs and LMs from the Apollo program and the centaur used for LRO/LCROSS. I wasn't able to find any faster man made impactors (I explicitly ignored impacts through atmosphere, as that ceases to be only rigid bodies), but honestly I wasn't thorough since I don't feel like this answer keeps to the spirit of the question, given the examples provided in the OP. A potentially slightly better answer that avoids the issue with the impulse coming from a heavenly body is the Iridium 33 and Kosmos-2251 collision, which produced debris that had a change of velocity in the 100s of m/s. This is still not a satisfying answer to me though.

It may not be anywhere as impressive as some of the other solutions, but I find it to be the most satisfying fit with the way the prompt was worded.

"Shepard brought along a six iron golf club head which he could attach to the handle of a lunar excavation tool, and two golf balls, and took several one-handed swings (due to the limited flexibility of the EVA suit). He exuberantly exclaimed that the second ball went "miles and miles and miles" in the low lunar gravity, but later estimated the distance as 200 to 400 yards (180 to 370 m)." Wikipedia

A quick projectile motion calculation gives an initial velocity for the ball of about 20m/s.

Golfing has also been done from the shuttle and ISS, but the first was putting, and the second was an intentionally slow swing.

If pneumatic pressure counts as mechanical energy, then the winner by far is the "manhole cover in space." In 1957, a nuclear weapon was detonated at the bottom of a mine shaft with a 2,000 lb manhole cover blocking the top of it. It is unknown whether it made it out of the atmosphere or was vaporized, but if did make it out it is the fastest moving object created by mankind.

During the Pascal-B nuclear test, a 900-kilogram (2,000 lb) steel plate cap (a piece of armor plate) was blasted off the top of a test shaft at a speed of more than 66 km/s (41 mi/s; 240,000 km/h; 150,000 mph). Before the test, experimental designer Dr. Brownlee had estimated that the nuclear explosion, combined with the specific design of the shaft, would accelerate the plate to approximately six times Earth's escape velocity.[8] The plate was never found, but Dr. Brownlee believes[9] that the plate did not leave the atmosphere, as it may even have been vaporized by compression heating of the atmosphere due to its high speed.

Not the answer you're looking for? Browse other questions tagged spacecraft orbital-maneuver record or ask your own question.

12
Highest DC voltage ever intentionally produced in space?
26
How hard do you have to throw something off the ISS to make it deorbit?
12
How can a yo-yo de-spin maneuver reverse the rotation?
3
How did the GoFast 2014 Rocket de-spin?
3
Has adjustable Yo-Yo de-spin been tested or demonstrated?
4
Why is "Terminator Tape" electrically conductive?
4
Fastest Manmade Object
1
What if we launched rockets from space using the slingshot method and centripetal force? Would that be possible?
2
Highest velocity impact between a spacecraft and a solar system body? What about for a dedicated impactor (spacecraft component)?
3
What is the largest energy stored in a spring or other stress-based energy storage device that's ever been put in space?
See more linked questions