How accurate is the patched conic approximation when performing a Hohmann interplanetary transfer?

I've been making a Mathematica script whereby a spacecraft is transferred from Earth to Mars using a Hohmann interplanetary transfer by means of a patched conic approximation.

As far as I can tell all of the equations and numbers should be correct, yet when running the code the spacecraft doesn't make it to Mars. Without getting into any detail of the code (that will have to be for the Mathematica SX forums), I wanted to ask how accurate the patched conic approximation really is. If all of the numbers are correct should I be able to run the code and the spacecraft will hit Mars, or is it supposed to be used to find a rough trajectory to another planet? I understand the inherent inaccuracies with the approximation since it considers everything in terms of individual 2-body problems, and so thought I might be a little too hopeful when I thought it would get me to Mars. 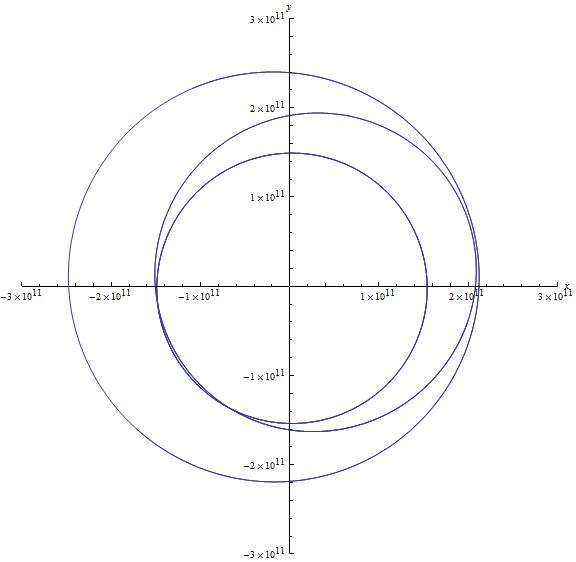 EDIT: Okay, I think my initial post used an incorrect angle for applying the delta-v impulse which I have since fixed (I think!). I made a second program that looked at just the Earth and spacecraft upon departure to confirm whether my angle was correct and this is what I got (the spacecraft doesn't actually pass through the green circle (Earth). The green circle is just the position of Earth at the start of the simulation):

As you can see, the spacecraft's escape velocity is parallel to the Earth's velocity which is a good start. I got the correct angle by finding the angle of the Earth's velocity vector using phi = arctan(v_y/v_x), the "impulse angle" (not too sure what to call it) by using beta = arccos(1/e) and then using theta = phi + beta + pi when finding the x- and y-components for delta-v = v_p - v_c (where v_x and v_y are the x- and y-components of the Earth's velocity respectively, e is the escape hyperbola's eccentricity and v_p and v_c are the spacecraft's periapse speed and circular orbit speed about Earth respectively).

Unfortunately, when running the full program again in the Sun's frame of reference I found the following: 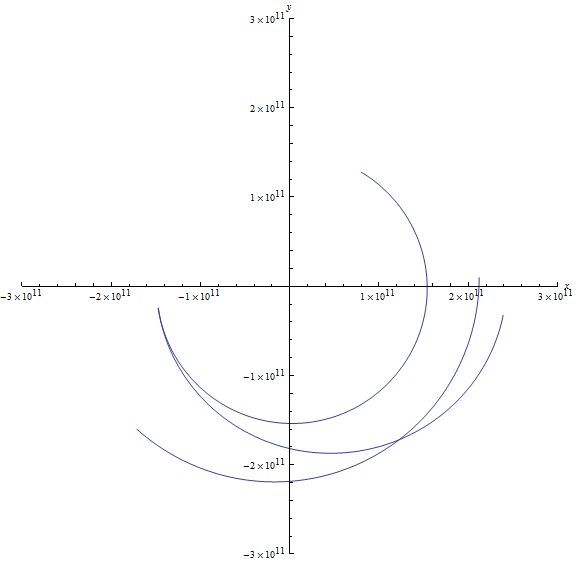 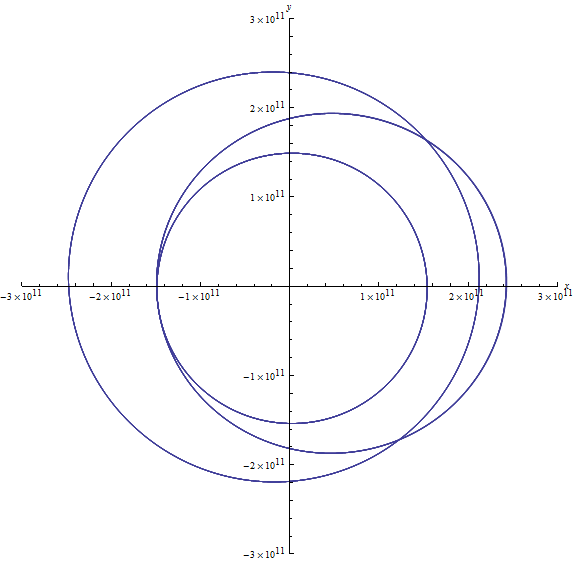 P.S. The equations I'm using are from Orbital Mechanics for Engineering Students by Howard Curtis.

UPDATE: Solution to Earth-Mars interplanetary transfer using Lambert solver (some much needed coding help was given my the Mathematica SX forums). 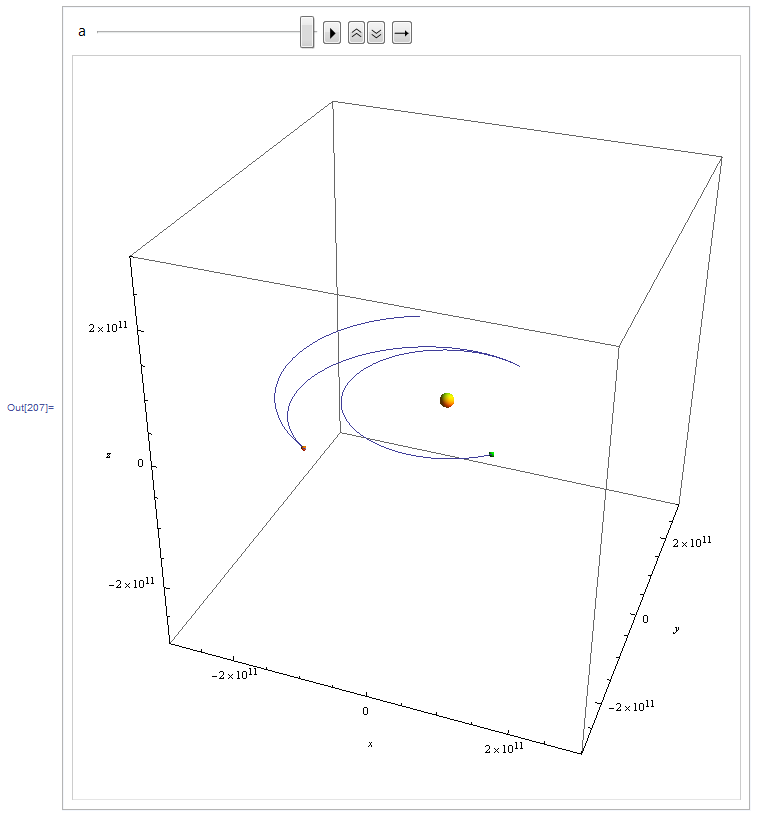 It's pretty hard to tell what's going on with just a plot, especially since you show an entire spacecraft orbit instead of just the half that you intended to be the transfer. In any case, one thing that I'm seeing that doesn't look right is that the spacecraft trajectory goes inside Earth's orbit. That shouldn't happen (at least not to the degree shown). That indicates that your departure velocity from Earth ($V_\infty$) has the wrong direction.

Are you integrating from a low Earth orbit? It takes some care to time that correctly so you get the right $V_\infty$ direction.

While the patched conic is just an approximation, if done correctly it should get you much closer to the orbit of Mars than what you show. You should not be able to see a gap at the resolution of that plot.

When you say in the comments "I was hoping to see the spacecraft either get pulled into an orbit about Mars ...", that's not possible. Without a propulsive maneuver at Mars, the spacecraft will fly by, as indicated in the rest of your sentence "... or have its orbital path highly perturbed by coming into Mars' sphere of influence". That will happen if you get the timing right for when you depart Earth.

Now you need to account for the eccentricity of the orbit of Mars. The spacecraft should have an aphelion that corresponds to the distance of Mars from the Sun at the planned time of the encounter. It will help to also take into account the eccentricity of the Earth's orbit, in particular the distance of the Earth from the Sun at the time of departure.

Beware the perils of the numerical derivative. Take care to not use too small of a $\Delta T$. Here is an example in Mathematica when trying to determine the velocity vector of Earth using Earth position data. $\Delta T$ is on the x-axis in seconds. 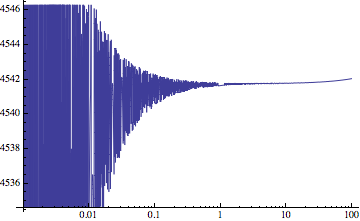 This can be mitigated by using a broken plane transfer orbit. See Deboning The Porkchop Plot.

Not the answer you're looking for? Browse other questions tagged orbital-mechanics hohmann-transfer trajectory-design or ask your own question.

11
3-Body Simulation and Accuracy of Lambert Interplanetary Solver
11
Mars Orbit Upon Intercept
5
Do transfer orbits toward the central star necessarily result in a higher velocity on arrival due to the star's gravity?
5
How does a change in velocity affect the properties of an orbit in a 2D plane?
3
How do I calculate wait time to launch?
3
When doing an interplanetary Hohmann transfer, are additional escape and capture burns necessary in addition to the two Hohmann Transfer burns?
4
Why can't I just use dot product angles to get satellite vision of a point on Earth?
2
How to detect the correct sign of the true anomaly for position prediction (clockwise/counterclockwise rotation)?