During Jettisonable Emergency Escape Head Section abort mode, the head section of the rocket is separated and pulled away by OGB SAS (the escape tower) to safety away from the malfunctioning lower stages.

The Soyuz LES takes only the orbital module and reentry module with it, in order to maximize acceleration away from the launch vehicle. The diagram you link to in the question implicitly confirms this; the proportions of the separated section are such that the OM and RM fit neatly, and there’s no room for the SM.

In 1965, developers of the escape system stumbled upon a new serious problem. As it turned out, collision-free separation of the entire payload fairing from the service module of the Soyuz (which remained on the rocket) was practically impossible. After a series of brainstorming sessions, engineers split the payload fairing into top and bottom sections. In the emergency, the top section would fly away with the escape rocket and the crew compartments, while bottom section, surrounding the service module, would remain on the rocket. 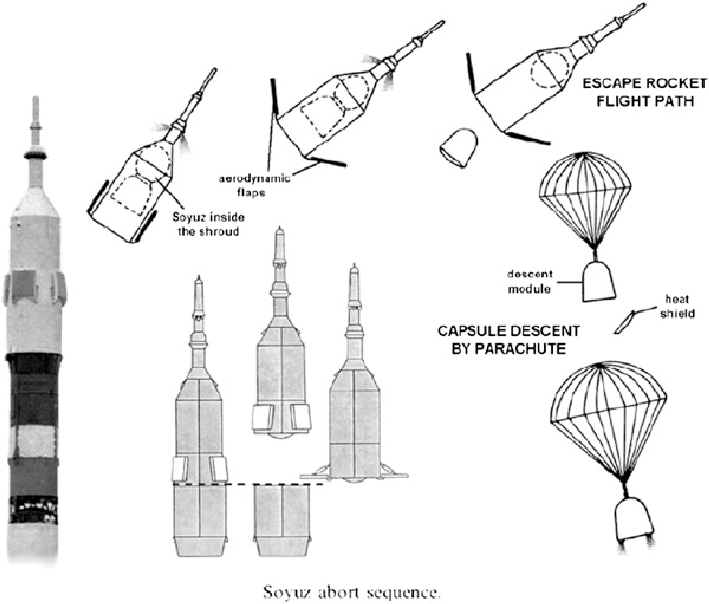 Not the answer you're looking for? Browse other questions tagged soyuz-spacecraft abort soyuz-launcher launch-escape-system or ask your own question.

11
Are there any Pusher Launch Escape Systems in actual use?
16
Why is the descent module of the Soyuz in the middle of its stack?
6
What abort modes does Soyuz have in space?
4
Does Dragon v2 only have Superdracos as an abort system?
9
Why were ejection seats used in Project Gemini instead of a tower escape system?
8
Can a crewed capsule land safely if its launch escape tower does not separate?
19
How did the attitude system of the uncrewed Soyuz 7K-OK No.1 fail on the launch pad in 1966, killing ground staff as LES was activated?
13
Was a method available to save the Challenger Crew?
17
Was the LES used in the MS-10 abort?