On Mir, Zarya, or Zvezda, do docking ports consume space inside the module?

I have been asking about why Zarya, Zvezda have the number of docking ports they have, and whether more will be needed.

This got me thinking about what the inside of the docking module looks like. I watched a great video showing a Soyuz departing the station. I noticed, that from the Soyuz, they closed a hatch, that had the docking probe atop it.

Then on the ISS side they closed a cover over it, sort of a cone sticking into the station. (Shape reminded me of Gemini capsules. Thin tube at the top, widening into a more traditional cone shape below it).

I was wondering if having a 6 port docking port, like Mir did, eats a lot of space in the docking compartment? But that clearly worked on Mir, and having two or three on Zarya/Zvezda seem like 2-3 more would not matter that much?

First off, here's a picture (source: NASA) of the inside of the MIR node with something connected in every direction: 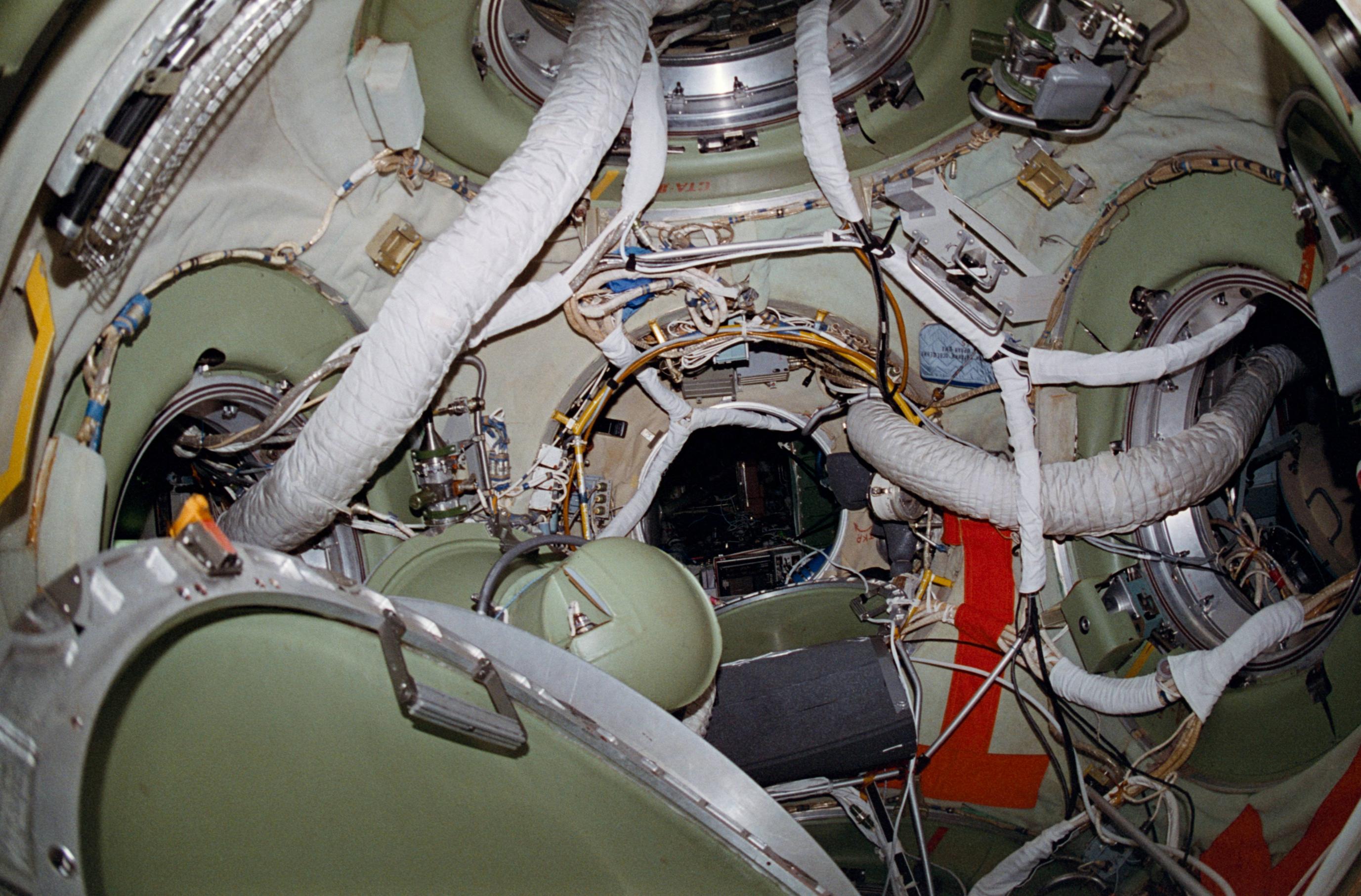 There's also a video here where the node is traversed, but I can't find any pictures from before all the ports were occupied.

It's not particularly spacious, but in the picture only one cone-shaped drogue hatch cover is clearly visible, as well as one cover near the camera (can't tell its geometry) and what looks like a flat cover through the far hatch. The specs of the base module (from Mir Heritage Hardware, page 104) that specifies 2 docking and 4 berthing ports (docking were on the ends of the module, berthing were on the sides of the node, difference being that berthing ports didn't have an automatic docking system). All ports appear to use the SSVP docking system.

Procedure for connecting a module to a berthing port (also from Mir Heritage Hardware) involved docking the module to the axial port of the node, then using a manipulator arm to move it to a berthing port. I don't see any indication that a different docking mechanism was used, meaning that each berthed node would have needed a drogue port to connect to. I can't currently find a source, but I believe that once connected the probe/drogue could be removed to free up space around the transfer tunnel (and the pictures/video are consistent with this).

To directly answer the question: No, it doesn't appear that the docking ports consume much interior space. I think the real reason they didn't include more docking/berthing ports in Zarya/Zvezda is a combination of the close proximity of solar panels (zarya/zvezda pictures) on the sides and a desire not to add complexity or holes in the space station that weren't expected to be used.

Not the answer you're looking for? Browse other questions tagged iss zvezda zarya docking-port mir or ask your own question.

32
Will the ISS need more docking ports?
9
Why is the Pirs docking module being discarded?
8
On Mir, did they ever move a Soyuz at the front end, to a side docking port using Lyappa?
9
Why were the docking ports removed from Zvezda? (Service Module)
3
Why did Zarya (FGB) come with a single docking port?
15
How many docking/berthing operations can a CBM port tolerate?
15
Can Dragon, or Dragon V2 be used to boost the ISS orbit?
8
How was APAS-89 chosen for Buran and Kristall?
8
Why have androgynous docking systems seemingly fallen out of favour?