Are we alone after all? Understanding the recent re-evaluation of the Drake Equation

The Quartz.com article We may have answered the Fermi Paradox: We are alone in the universe says:

Researchers of Oxford University’s Future of Humanity Institute have another answer. It’s likely intelligent life doesn’t exist at all, outside of Earth.

In a paper submitted to the Proceedings of the Royal Society of London (it appeared online this month on the pre-publication site arXiv), the researchers write that there is “a substantial ex ante probability of there being no other intelligent life in our observable universe,” and we shouldn’t be surprised if we fail to detect any signs of it. In other words, there is no need to speculate about the fate of aliens. It’s likely they’ve never existed, they assert in the paper, titled “Dissolving the Fermi Paradox.”

And according to the Tech Times article Fermi Paradox Reassessed: Humans Likely The Only Intelligent Species In Observable Universe:

The number of scientific uncertainties derived from their calculations was highly distributed and those uncertainties lead them to a conclusion that humanity is most likely alone in the galaxy.

"We found that even using the guesstimates in the literature (we took them and randomly combined the parameter estimates) one can have a situation where the mean number of civilizations in the galaxy might be fairly high - say a hundred - and yet the probability that we are alone in the galaxy is 30%," explained Sandberg.

This does not mean, however, that humans should stop pursuing the quest for the extraterrestrial life. In fact, according to Sandberg, the level of uncertainty they calculated was tremendous enough to need the intervention of astrobiology and SETI to reduce those uncertainties of the parameters.

I've heard about the Drake Equation but not very familliar with it.

From what I understand so far, they've primarily widened the uncertainties in each of the terms. A broader distribution of probabilities would increase the probability that a values much higher as well as much lower than the most likely value are also possible.

Question: But is that all that's going on here, or does their new evaluation of the Drake Equation also include a shift downward in the overall expected results?

A broader distribution of probabilities would increase the probability that a values much higher as well as much lower than the most likely value are also possible.

But is that all that's going on here, or does their new evaluation of the Drake Equation also include a shift downward in the overall expected results?

They (properly) point out that many people look at the Drake equation $N = R_* f_p n_e f_i f_C L$ and interpret it as a product of expectation (mean) values. But when each factor is uncertain, what you should really be looking at is the composition of the distributions: In what fraction of possible cases do you get interesting answers?

Their figure 1 captures this idea with common literature values:

Figure 1: (A) The uncertainty in the research community represented via a syn- thetic probability density function over N — the expected number of detectable civilizations in our galaxy. The curve is generated by random sampling from the literature estimates of each parameter. Direct literature estimates of the num- ber of detectable civilizations are marked with red rings. (B) The corresponding synthetic cumulative density function.

The top is using a Monte Carlo method to work out the distribution (again, from literature values) of possible number of civilizations in the Universe. The peak is about 100-1000 (hard to be sure with such a complicated scale), but there's a long "nobody home" tail on the left. The bottom is the cumulative: "What's the fraction that have less than this?" It shows that there's about a ~10% chance, even with those values of "alone in the universe" (only 1, e.g. us), and a ~30% chance of "alone in the Galaxy"

Bottom line: Even if those numerical values look like there's a good chance of neighbors, it may also play out that we're alone.

They then look at "conditioned credence" in the numbers, which is a technical exercise about how uncertainty has been represented, how measurement sampling was done, how factional cases and some other statistical issues are handled, etc.

They follow that with some interesting arguments about individual factors leading to some specific scenarios.

They end up with: 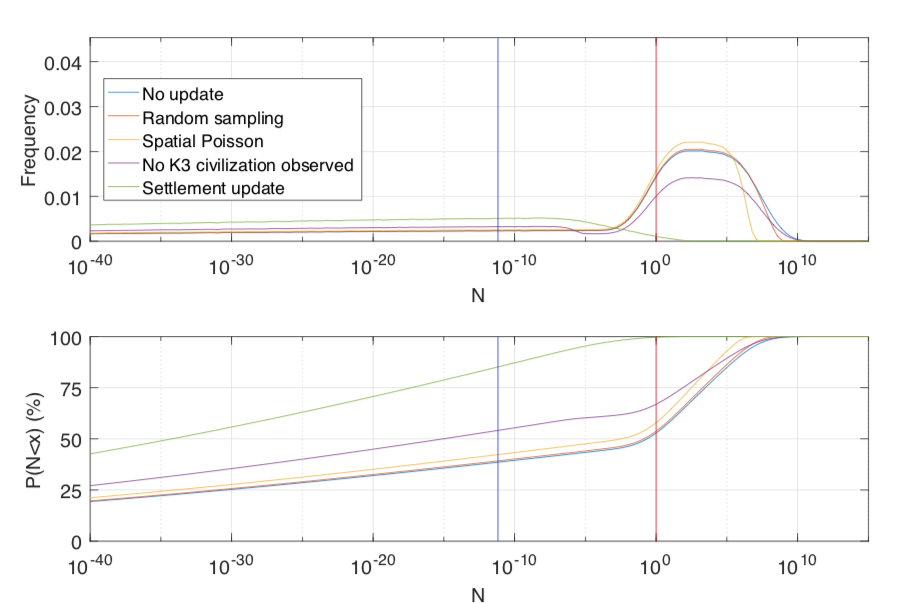 Figure 3: Effect of updating on the Fermi observation for different scenarios. Random sampling: no observations among 1,000 studied stars, spatial Poisson: no ETI within 18 pc, no K3 civilization: effect of the $\hat{G}$-survey if $P_{K3} = 0.5$ and $P_{succ} = 0.01$, no settlement: no interstellar civilization has yet spread to our location in the galaxy.

Even though there's still significant number of cases where lots of civilizations exist, there are also large numbers of cases where there's just us.

I don't know how to evaluate their astro-biology arguments, but at first read their statistical arguments are sound. They're probably not the final statement, though: Arguments like these depend a lot on the details of tail modeling and sampling, etc and I'm sure that there will be follow up literature.

Just to say a little more about the "conditioned credence" section, what they are saying there is that the Drake Equation isn't the only data we have. We have also looked for signs of civilization, and there are other ways we might in the future look for civilization. And the fact that we haven't found any evidence tells us something.

A concrete example might help. According to their analysis, the Drake Equation by itself says there is roughly a 70% chance that there is another civilization in the galaxy. Encouraging, if you like to have neighbors.

Unfortunately, later in the paper, they come up with their own estimates of the uncertainties in each parameter, and the chance of galactic neighbors drops to 50%.

And then there's the "conditioned credence" issue. If there were other civilizations, there is at least some chance they would have spread through the galaxy by now in such a way that their presence would be obvious to us. Since that hasn't happened, that should lower your estimate of the probability that they even exist.

It is difficult to estimate how much it should lower the probabilities, but the authors do try. You would need an estimate of how likely a given civilization is to expand in that way. If every civilization has a 99% chance of staying in its cradle, then failure to see them doesn't tell us much. If they would have a 99% chance of settling the whole galaxy to the degree that every habitable planet has traces of their presence, they they probably aren't out there because they would have been here by now.

To me, this suggests the following: The more optimistic you are about humans eventually settling the whole galaxy, the more pessimistic you should be about there being other civilizations for us to find.

2
Is there good estimates/measures on the variables that make up the Fermi paradox?
0
Is the universe already colonized or are the Drake equation coefficients a much stronger filter: what are the cosmology issues with this paper?