What is the purpose of the "shaft" and "block" in these two different engine gimbal joints?

This question refers to the device which transfers the thrust force from the engine to the vehicle while allowing the engine to swivel - the "gimbal joint".

Both the F-1 and SSME have a bolt- or shaft-like device inserted (or able to be inserted) into the side of the gimbal joint. Obviously these engines share a common design heritage. (Curiously, the "male" and "female" sides of the joint are inverted between the two engines. In both cases the "shaft" goes into the "male" side.)

Is it used to lock the gimbal? To expand the mating parts so they fit properly? Neither of these "feels" right.

Answers with solid references only please! 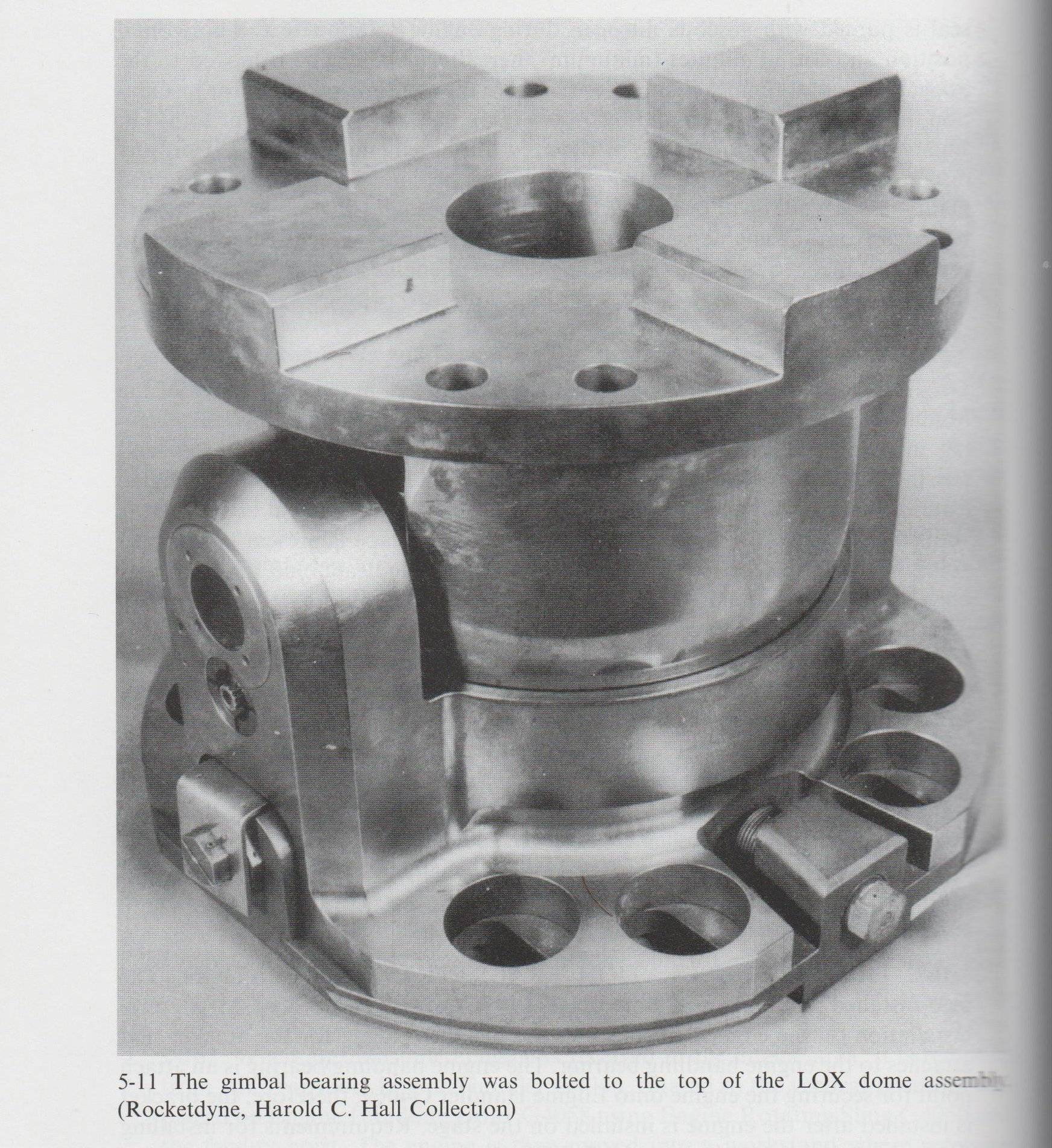 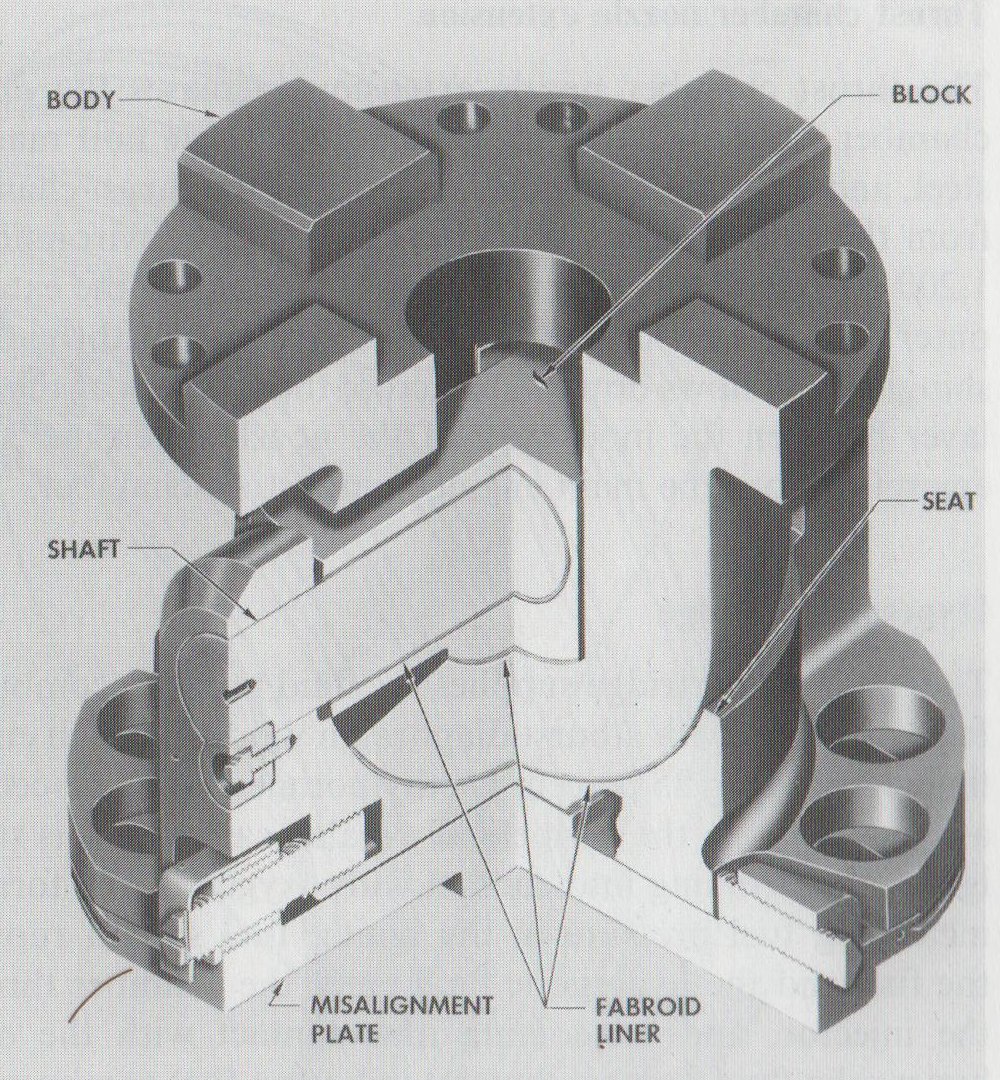 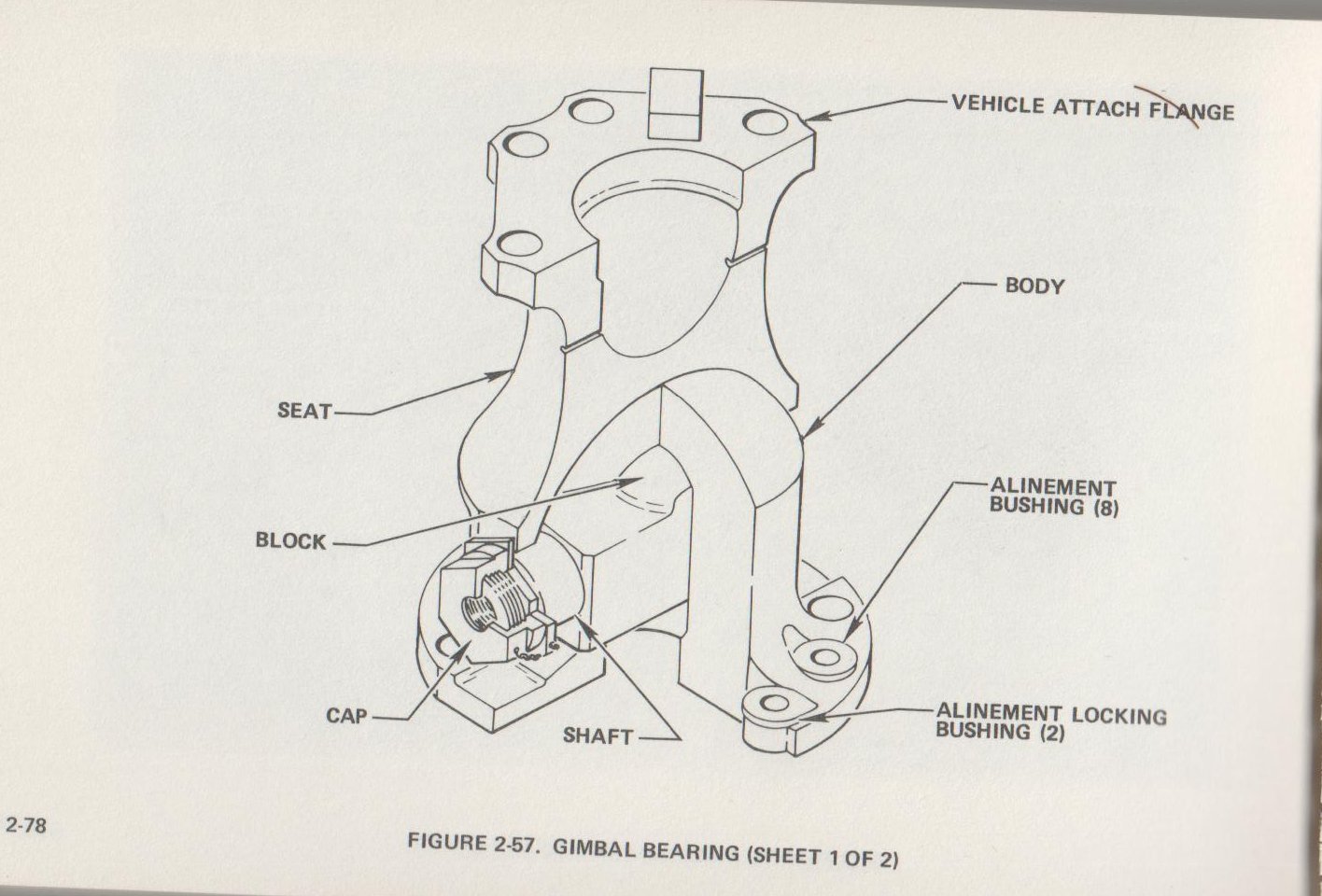 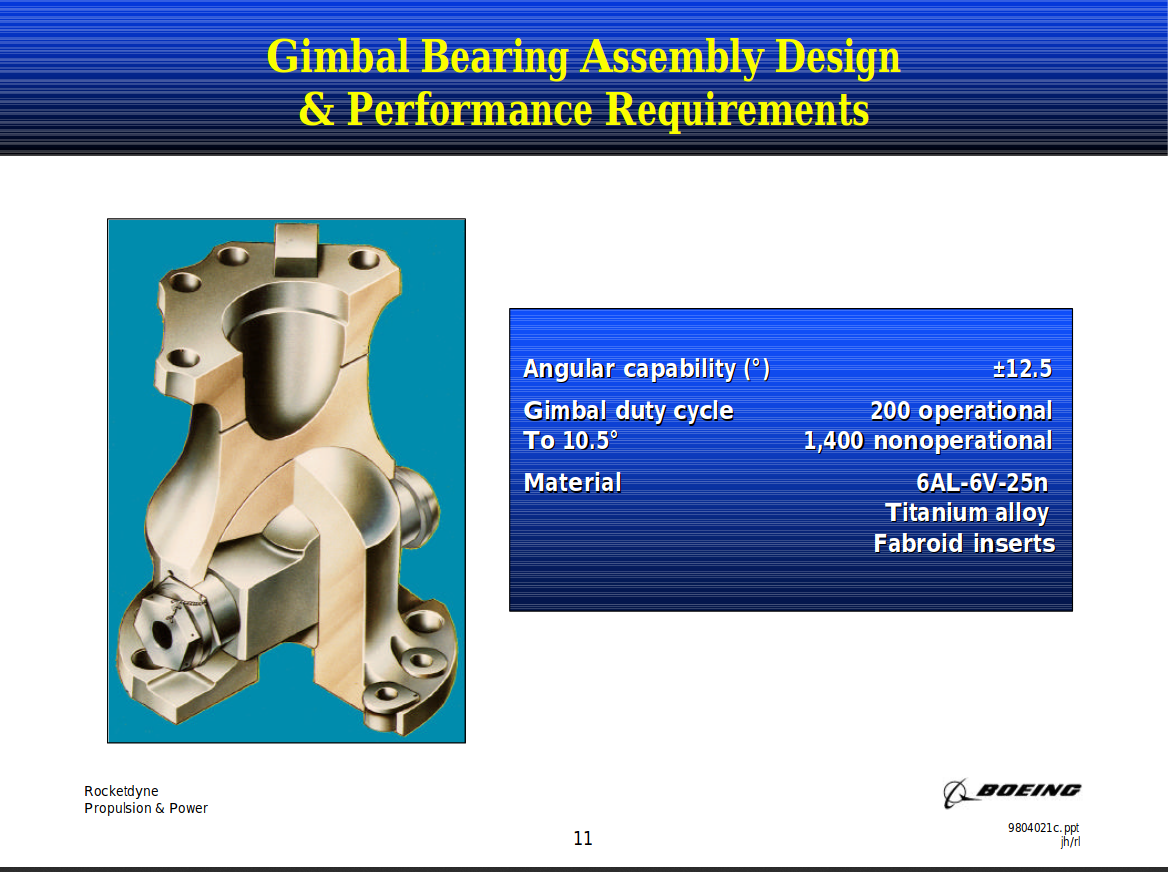 Let's take the second image for the F1 engine - the situation is similar for SSME, though everything is 'upside-down' in its pictures. 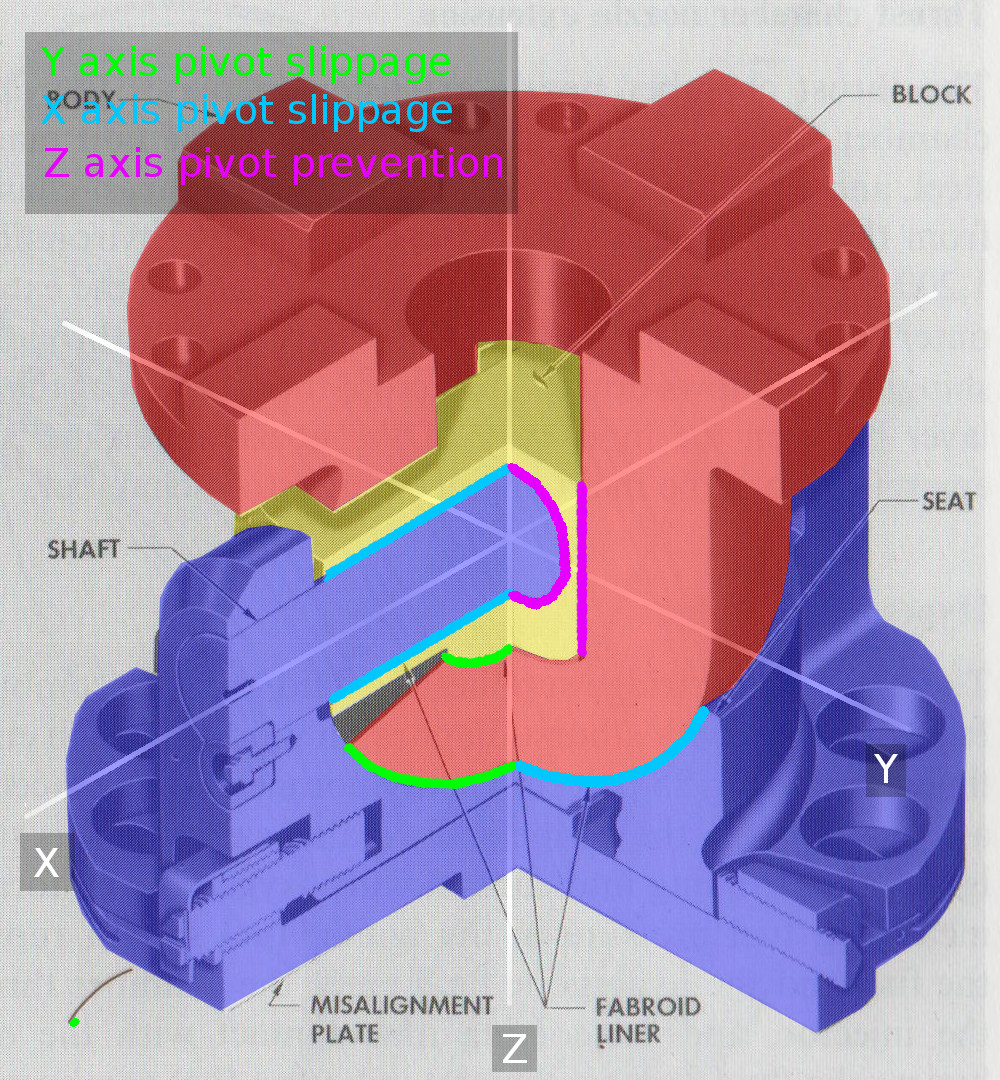 The 'seat', 'body' and 'block' are three parts that turn against each other.

The Z axis remains fixed, as the block can't turn 'across' the shaft, and the flat areas on its sides prevent body turning around the block.

That's all for rotation. Now there's translation, which needs to be constrained in all 3 axis, two directions each.

X and Y translation is less of a concern, but still the seat-block interface prevents it - transforming it into a much weaker tensile load, that is either prevented by the shaft-block assembly, or completely negated by thrust of the engine exerting a compressive load.

The gimbal performs the following functions:

You can see all of these features in the picture. The "seat" is the feature that takes the primary thrust load and around which the engine rotates per item 1. The "block and shaft" take the torsion and prevent rotation between the upper and lower halves of the gimbal per item 2. The lower dimple, as pointed out, combined with the block and shaft, provides the contact surface for reverse thrust per item 3. The adjusting screws on the sides allow the gimbal to be adjusted per item 4. The large tabs on the upper and lower faces transmit the torque into adjacent structure per item 5.

The "fabroid" is a low friction PTFE cloth application which reduces friction at the sliding contact points.

Feed lines of Kerosene and LOX are many feet off center, so rotation of the F-1 engine (roll) is restricted by the Shaft and Block to almost zero.
Note small loading pad on the 'bottom' of the Block, this supports hanging one of the four 18,000 pound gimbaled F-1 engines on the Saturn-V, the fifth center engine is rigid. The Block pad seats on a small concave pit inside the 10" hemisphere and is also at the same nodal-point as the thrust axis for yaw and pitch. The Block also has a Fiberglass-teflon sleeve pasted inside to control galing with the Shaft.

Not the answer you're looking for? Browse other questions tagged engines engine-design identify-this-object ssme gimbaled-engines or ask your own question.

19
Was the third shuttle engine any different from the others?
2
What is the highest gimbal range ever used on an engine?
1
What is a raptor engine manifold and what's happening in these tweeted pics?
10
Why don't all SSME turbopumps gimbal with the engine?
1
What impacts do the rocket engine cycles have on the sizing of the components and effectively the engine?
7
What is the purpose of these three taut cables near an ISS astronaut during EVA? To what do they connect and why do two appear intertwined?
8
What is the purpose of the shrouds surrounding these rocket engines?
11
Does the Merlin vacuum engine on SpaceX's Falcon 9 gimbal?
13
What parts of the InSight lander are missing between these two photos?