What is Tiangong-2 doing?

Some news in various outlets following some twitterings including this tweet by Jonathan McDowell about Tiangong-2 performing a sizeable orbit-lowering, followed by a re-raising: ‏

OK now that's weird. New orbit data for Tiangong 2 shows it back in the 390 km orbit after spending 10 days in the lower 295 km orbit. Wonder what that was about??

Sure enough, I propagated TLEs from 2018 (using standard SGP4 within Skyfield) and found a substantial drop and then raising shown below. Interestingly, there are a couple of wiggles at the bottom, and the raising is differently-shaped (slower towards the end) than the lowering.

While other's have seen what looks like eccentricity noise in Tiangong-1's propagated orbit from TLEs, these wiggles near 320 km look quite real since it's the semimajor axis and therefore period that is wiggling, not just eccentricity.

Having a spacecraft make such a large, apparently unannounced orbital maneuver in LEO is kind-of a big thing.

(script used for propagation in pastebin) 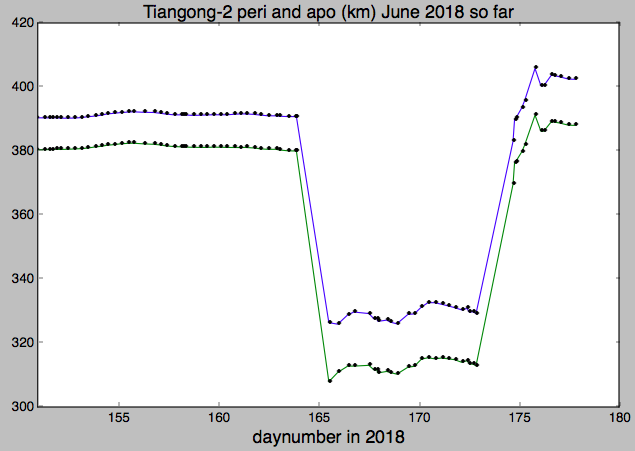 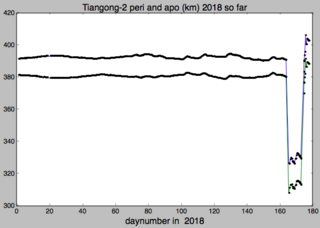 Browse other questions tagged orbital-maneuver tiangong-2 or ask your own question.

4
Did Tiangong-1 turn the engines on?

5
What is a gravitational slingshot?
8
Cargo delivery from the ISS to Tiangong
0
What inclination change could the 5th stage Orion 38 motor provide ORS-5 (SensorSat)?
2
Could the Tiangong-2 dock to the ISS?
2
Why Celestrak has Archived TLEs for most space stations from Russia and the US, but not Tiangong-1, Tiangong-2 or Skylab?
9
What is the delta-v required to get a mass in Earth orbit into the sun using a SINGLE transfer?
3
When doing an interplanetary Hohmann transfer, are additional escape and capture burns necessary in addition to the two Hohmann Transfer burns?