How big would a manned ascent stage for Mars need to be?

For a manned mission to Mars that isn't a one-way trip, we'll need an ascent stage that can reach orbit from Mars' surface. How big would this need to be to transport e.g. 3 astronauts to orbit?
We've seen examples for Earth (Soyuz comes to mind as a sort-of minimal solution at 600 tons loaded) and the Moon (LM ascent stage was roughly the size of a car). A Mars ascent stage would fall somewhere between these extremes, but where?
Would it be feasible to launch the descent + ascent stages from Earth on a single launcher, or would it need to be assembled in orbit?

Okay, so let's start from a ship somehow constructed and fueled on Mars, and work our way back from that. This convenient delta v chart from Wikipedia shows us a good starting point: 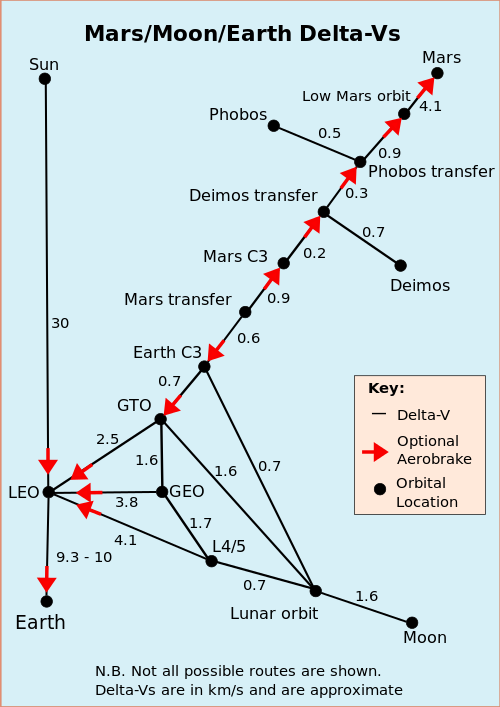 Okay, so the delta v to Low Mars Orbit is about 4.1 km/s. The delta V to get to Earth from there is 2.9 km/s (Earth C3 to Low Mars Orbit). Bottom line is, you need to lift 3 people and supplies and provide it with a delta v of about 6.0 km/s. I'm not an expert in the supplies category, so let's just pick a number, say, let's carry a Dragon capsule fully loaded. Wikipedia gives about 7500 kgs, which is probably a fair starting point. That's not quite as much as required for an Earth Launch, but would be similar to a Falcon 9 launch from Mars to Earth. Let's call it half of one. In fact, The Case for Mars states that around 96 tons of fuel is required to make the trip for 4. Few (None existing) rockets can take that to LEO, let alone to the Martian surface. Still, there is an alternative that doesn't involve orbital assembly.

The key focus is 2 points. First of all, fuel the rocket on the surface of Mars. If you take hydrogen from Earth, you can easily combine it with carbon dioxide and have methane and oxygen, which is a very good rocket fuel. And that requires only 16 tons of fuel, not too bad to manage. Secondly, send the return rocket to the surface of Mars first, let it fuel itself for the return trip home, and you simply have to land close enough to the ship to get there on the surface, which shouldn't be too difficult, as you will have a large range with on board capabilities to get where you need to go.

I plugged the data provided by @PearsonArtPhoto into the rocket equation, with Isp=304 seconds (Merlin 1C in vacuum), and I get a launch mass of 262 tons to get a Dragon into Mars orbit. A Falcon 9v1.0 weighs 333 tons.
To get from Mars surface directly to Earth C3, I get a launch mass of 3713 tons, or 1.3 times the weight of a Saturn V. So you really need a Mars Orbit rendezvous on the return trip.

I base this on the roughly 4 km/sec delta v astronautix.com describes for the LM, and multiply the mass of the LM by 1.5 to account for the increase of crew to three.

Would it be feasible to launch the descent + ascent stages from Earth on a single launcher, or would it need to be assembled in orbit?

As Hobbes and PearsonArtPhoto calculated, it is not feasible to start from Earth as there are no rockets ready, not even from United Launch Alliance or SpaceX, BlueOrigin or Bigelow Space Exploration.

The question is, why not to assemble in space?

Furthermore taking Hydrogen from Earth to Mars distorts the fact that 90% of known visible matter in the universe is hydrogen (H2), the lightest element we know. Why take it from Earth where hydrogen resources are really limited. It's interesting seeing demand for Hydrogen cars on our planet - extracting the H2 out of water H2O via Electrolysis - and at the same time fear that the next war will be about water resources ...

No doubt Hydrogen is a good choice for energy storage in space (where there is plenty of H2).

Back to space assembly, there is a factory in orbit originally planned for 2014, now unfortunately postponed to 2015: Bigelow Inflatable Space Module.

Bigelow BA330 project originally should be plugged together to yield a huge factory habitat. I now remember it's been called Complex Alpha for 16 and Complex Bravo for 32 workers. manufacturer website, also mentions year 2014 for launch.

Not the answer you're looking for? Browse other questions tagged mars rockets propulsion engineering stages or ask your own question.

2
What's required to construct a space port on the Moon or Mars?
9
How would one come up with an optimal team-size for a manned interplanetary mission?
3
What payload mass can different launchers send in Hohmann trajectories to different destinations?