Is this description of the "dipole drive" and how it would work physically correct?

Comments in chat have noted the recent post in the Centauri Dreams blog titled The Dipole Drive: A New Concept for Space Propulsion.

In contrast to the single positively charged screen employed by the electric sail, the dipole drive is constructed from two parallel screens, one charged positive, the other negative, creating an electric field between them with no significant field outside.

Also near the end:

Because the dipole drive does not interact with plasma outside of the zone between its screens, the issue of Debye shielding of its screen system to outside charges is not a concern.

My question is about what the phrase "no significant field" (as well as "does not interract... outside of...") means. Each screen is an equipotential, and the value of the integral of $\mathbf{E} \centerdot d\mathbf{l}$ is going to be the same whether you integrate along a short line between the plates, or the long way around, where the field is much weaker but the distances are just as much longer.

Is this just an oversight, or does this have some real impact on how this device would actually perform for a realistic size, plasma density, and potential difference in the scenarios discussed.

Note that adding a second pair of grounded grids outside the "dipole" pair to try to enforce E=0 outside just adds additional forces in the additional gaps that might tend to cancel the effectiveness. I don't see a quick fix here.

Question: Is this description of the "dipole drive" and how it would work physically correct? 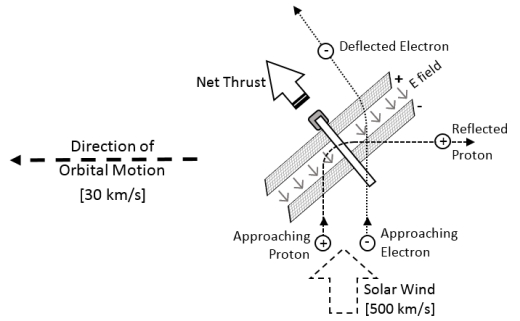 I think you're right. A finite pair of charged screens, with zero net charge, can't create an infinite potential well; the potential far away from the device must return to zero, which means that the propelled particles must get decelerated to their original velocities, taking back the momentum they initially provided.

It seems that Zubrin has taken a familiar approximation — that the field near a charged plane surface is constant (and therefore the fields of the two screens cancel out, outside the gap between them) — and forgotten its key assumption: it applies only at small distances (relative to the size of the screens). But the particles don't stay that close for very long at all. As they move away, they start to feel the dipole field around the spacecraft. Although this field is weak and falls off fast, as $\frac{1}{r^3}$, the distance the particle travels in this field, as you point out, is much greater.

(I'd love to be wrong about this. It seems like such a clever idea. But I can't find a flaw in this reasoning. Maybe someone else can.)

Edited to add: I think it's instructive to consider what would happen if the screens were actually infinite. Suppose that the density of plasma entering the gap is uniform, and that power sources are also placed with uniform spacing between the screens, so that the input power per unit area is constant and the density of ejected particles on the two sides is also constant. This device would work! — because the field really would be identically zero except in the gap between the screens; it would no longer matter how far away the particles got. Interestingly, the charge density on the screens would increase without bound; as protons were ejected out the negative side and electrons out the positive side, the power sources would have to continuously add charge to the screens so that the charge difference between the half-universes on each side of the gap would remain constant (as it must for the voltage across the gap to be held constant).

I want to admit, that Zubrin’s Dipole Drive consept will not work even in condition if you have infinite electrodes surface. Situation even more complicated than it is discribed by ScottBurson . Scott forgot that during infinite capacitor charging process, external vacuum electrical field will fully compensate internal electrical field, two parts of the Universe will be isolated by this infinit grid :-), only quantuum (tunnel) currents / noise will exchange between half-universes.

In addition Supposed electrodes are not composed by solid conducting surface, it is some type of grid, that has huge intergrid gaps, electric field and electrodynamic interaction between moving charged particles and finit sized non-solid grid electrodes is much more complicated. Summary energy balance will be always zero, no movement as sequence. You should pay attention also to expected DC Voltage,DC Current and power calculations, that are very speculative and have no any connection to real physic. Conductivity of interstellar plasma is very small, so described in Dipole Drive DC currents are not real, orders higher that real life. Youshould mention also supposed interstelar plasma conposition electrones and positive charged ions , where are negative charged ions?

5
Is the ejection of matter one way to get pushed the other way the only propulsion method we have?
2
What are all the kinds of electric propulsion that don't qualify as ion propulsion in standard spaceflight lingo?
1
Could a spacecraft be propelled by a 180 degree deflection of two charged particle beams?
1
Plasma magnet drive for reusing stages

12
How do long-flight space probe teams preserve the interest and the know-how?
2
MARS-CAT; What is a Cubesat Ambipolar Thruster and how does it work?
3
How can an electric sail be used for deorbiting considering that it doesn't work inside the magnetosphere?
2
Help understanding vectors in diagram from "Magnetohydrodynamic flow control during reentry" and the actual goal of this research
2
how does the direct fusion drive generate electric power?
2
What are all the kinds of electric propulsion that don't qualify as ion propulsion in standard spaceflight lingo?
3
What JPL laboratory is this exactly, and what are the functions of these amazing-looking control panels?
2
Was the Isp = 11,000 seconds Neumann Drive tested on the ISS? Did it work? How well did it perform?
5
Variant of the Tsiolkovsky rocket equation including engine specific power and efficiency, can anyone help me under stand how this works