How does the poliastro python package "Going to Mars with Python" example work? What's it really doing?

@astrojuanlu's answer mentions the existence of the Python package poliastro, and in the documentation there I found an example titled Going to Mars with Python using poliastro among others.

Input data used in the example includes some historical dates for the Mars Science Laboratory with the Curiosity rover, and some JPL Spice Kernels.

Apparently it generates an approximate mission trajectory from that somehow.

Question: In broad terms, how does it do this? What are the basic steps and methods it uses, and what kind of information is obtained? Is there an interplanetary trajectory that could be plotted? Times, magnitudes, and directions of Delta-V maneuvers as well?

I'm looking for more than just armchair speculation or "I suspect" class of answers. If possible, please give the example a test drive and include a script snippet and bit of output along with a summary that answers these questions. The idea is to provide an answer that's informative to future readers and users of poliastro. Thanks!

Full disclaimer: I'm the author and main developer of poliastro.

The most important step before doing anything is somehow retrieving the positions and velocities of the planets of the Solar System. Astropy, one of the core dependencies of poliastro, ships medium-precision approximate models described in Simon et al "Numerical expressions for precession formulae and mean elements for the Moon and the planets" (1994). However, for high precision applications it's better to directly download the ephemeris from JPL, based on observational data from many different sources and covering a wide time span[1]. Another Python package, jplephem, is able to read the Chebyshev polynomials contained in these files and compute the cartesian elements of the available bodies.

After setting precise dates of launch and arrival, in this case for the Mars Science Laboratory mission, and neglecting the Trajectory Correction Maneuvers (TCMs) and other deviations from Keplerian trajectories, poliastro can solve the Two Body Boundary Problem, also known as Lambert's problem, which gives the trajectory between two given points. There are several algorithms to solve Lambert's problem, and poliastro uses the Izzo algorithm, described at Izzo "Revisiting Lambert's Problem" (2014), which uses a Householder iterative method (the 3rd order equivalent of Newton's method) to attain faster convergence with fewer function evaluations.

After that, the only remaining thing is plotting[2]. For Keplerian trajectories, poliastro already knows how to best sample the points to maximize efficiency (and to avoid ugly effects at the apocenter of highly eccentric orbits) by using a smart method described in Berry & Healy "The generalized Sundman transformation for propagation of high-eccentricity elliptical orbits" (2002). For the case of already computed trajectories or non keplerian orbits, poliastro allows the user to just use the set of vectors. To produce simpler 2D plots, poliastro reprojects all the orbits onto the perifocal frame of the first orbit. On the other hand, 3D plots do not require any kind of preprocessing. 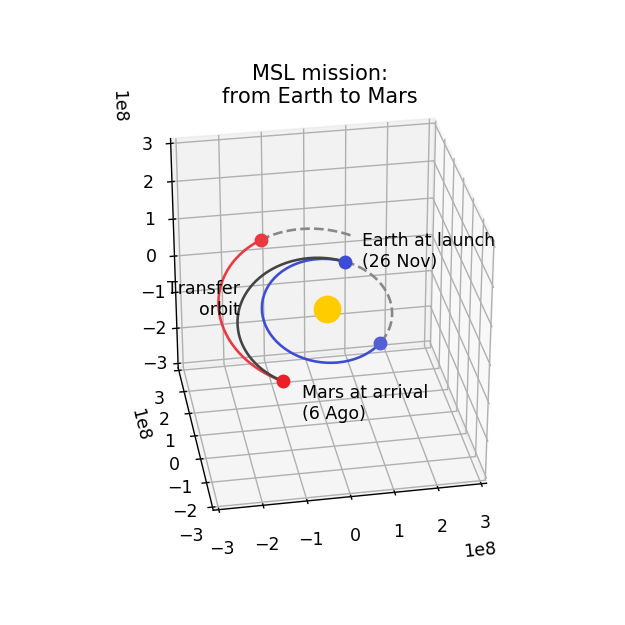 [1] An alternative source with a compatible file format is the "Institut de Mécanique Céleste et de Calcul des Éphémérides" https://www.imcce.fr/recherche/equipes/asd/inpop/download17a#4, but they are not yet supported by Astropy.

[2] The only reason the plots were not appearing was because of an annoying bug with the underlying 3D JavaScript library and the documentation website.

Not the answer you're looking for? Browse other questions tagged orbital-mechanics mission-design mathematics python poliastro .

13
Are patched conics (and by induction, KSP) "useless" for simulating ion propulsion?
6
Tools for low-thrust trajectory optimization
3
Suggestion for software which allows orbit data generation under different conditions (such as J2, ATM drag etc)
2
Lambert problem solver needed for custom gravity in Python
2
How exactly to use astroquery.jplhorizons to get the state vectors of Mercury and the Parker Solar Probe?
2
Determining the spacecraft position vector with respect to ICRF frame for Venus flyby

10
How does SGP4 work?
5
How does orbital altitude nomenclature work?
3
What's the cheapest way to send 10,000 kg to Mars?
17
Does the Voyager team use a wrapper (Fortran(77?) to Python) to transmit current commands?
3
When going to Mars, how do you measure exact distances to determine course corrections?
8
Does trajectory of an object orbiting a planet depend on the object's mass? (With hypothetical Apollo example)
2
How much delta-v have I used here? What's the "official" equation for delta-v from parametric thrust?
7
Is there an example of a classic space engineering moment where months of work had to be discarded due to the wrong approach?
0
Has Skyfield or any other SGP4-capable open-source Python package yet wrapped/implemented the new, improved SGP4 (version 8+)?