What is the ESA Grip experiment, and why does it require Alexander Gerst to be strapped into it?

The text of this 14-June-2018 astronews.com tweet translated into English via google says:

IMAGE OF THE DAY: Today's picture of the day shows the German ESA astronaut Alexander Gerst working in the Columbus laboratory of the ISS.

What is going on here? He looks like he's strapped into some contraption with hoses and wires and headphones and a massive metal contraption in his lap.

Could this be an exercise device or a biophysics experiment of some type?

edit: the tweet links to this further explanation of the image: https://www.astronews.com/bilddestages/2018/20180614.shtml which when translated mentions:

He is currently working on the ESA Grip experiment , which aims to investigate the effects of gravity on the human nervous system.

...or possibly lack of gravity?

So I suppose the question is "What is the ESA Grip experiment, and why does it require Alexander Gerst to be strapped into it?" 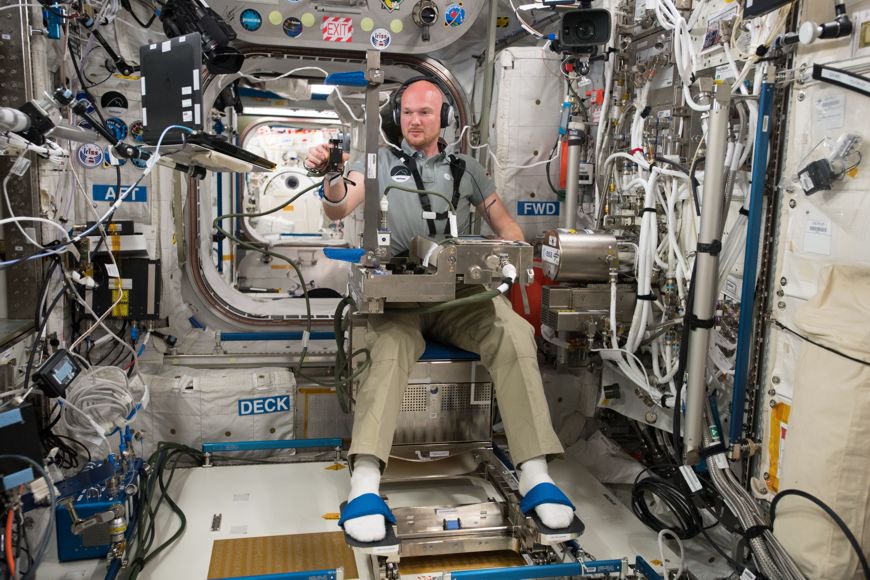 It is biophysics, and specifically about our ability to grip things in microgravity:

How our brains learn this process is at the core of the Grip experiment, being performed in this image by ESA astronaut Alexander Gerst on the International Space Station on his current Horizons mission.

How does the experiment work? Alexander performs a series of movements while gripping a purpose-built sensor that measures grip-forces, moisture and acceleration, and more to assess how the body adapts to situations in which there is no up or down.

For experiment trials: the subject takes either a seated or supine position using the straps provided by the GRIP chair. The subject then performs a set of movements while holding the manipulandum. Three protocols are defined for the experiment trials: movement dynamics, reference frames, and collisions.

Not the answer you're looking for? Browse other questions tagged iss identify-this-object esa or ask your own question.

2
What is the nature of the sextant tests on the ISS for Orion cis-lunar emergency navigation?

13
Why did the ESA choose SPARC for LEON?
15
Why are Europe’s Air & Space Academy and DLR urging ESA and CNES to reconsider the use of solid fuels for the proposed Ariane 6?
6
Swarm: Is ESA launching another set of aerodynamically streamlined satellites into LEO without any self-destruct system onboard?
7
Is there such a thing as the Freedom of Information Act for the ESA?
15
How will the UK leaving the EU affect ESA?
3
Why has ESA never flown a crewed spacecraft?
0
What ESA video contains this “family portrait” of comet-visiting spacecraft?
6
If the ESA has its own deep space network, why does it use NASA's?
14
What happened to the HDEV ISS Experiment? Is it over?
3
Why is ESA developing the Vinci engine rather than buying RL10Bs?