Can a reentry be done slowly?

The usual approach to reentry is fast and hot. There's a lot of energy to be lost, and doing it quickly has some advantages: You can dump energy into hypersonic air, and then leave that heat behind so that the hot part is over before the inside of the craft heats up.

As an alternative, what would it take to "fly" a slow reentry?

A typical LEO satellite, for example, is currently doing a stupendously slow reentry, dropping a few km at a time due to drag without significant heating. Eventually, however, when it hits denser atmosphere, it'll start losing energy and altitude fast, and convert to the fast & hot mode, usually burning up.

To avoid that, can a returning spacecraft could "fly" at the very top of the atmosphere for a long time? The craft would only slowly lose speed so keeping thermal issues small, without falling to lower altitude & denser air until the speed is far below orbital speed and normal flight can take over.

Is there any research available on what such a profile might look like, and what lift and drag performance would be needed to pull it off? (Even if we can't build such a craft, now or perhaps even ever)

Not without propellant. Or at least not easily. However the "why" is a bit tricky.

This is far from the whole story but one of the problems is that generating enough lift to keep you from diving too fast into the atmosphere is tricky.

However, in-between is where things get difficult. You have to able to generate lift and deal with going fast. For example going say 70% of orbital-velocity you'd need to generate about half as much lift as you would at low speed. This is the bit that's hard to do without generating heat. The aerodynamics is a little tricky however the gist of the problem is that (drag -> heat) as the energy needs dissipating, and its hard to get a high enough lift-to-drag ratio to get the necessary lift, without turning too much of the air's energy into heat.

The first problem is that lift-to-drag ratios always get lower at high velocity. http://www.aerospaceweb.org/design/waverider/design.shtml has a bit on it but the important bit for us is lift to drag scales very roughly as $(M + 3)/M$, where $M$ is the mach number.

More significantly, the shape you need to keep the hot shockwave off the surface (a blunt curve) is not conducive to generating significant lift, but is very good at generating drag. There doesn't seem to be a way of doing this that either doesn't generate significant heat or keeps the heat off the body.

It might be possible to do better in future with shape altering materials that can always be 'optimal' but you can't generate significant lift from mach 20 airflow, without generating a lot of heat. Currently the plan is to get this bit over-with as fast as possible, not to prolong it, because peak temperature is less significant than how long you're exposed to 5000ish degrees.

It is possible to do a slow and cool reentry. But it would be extreamly expensive.

Just slow down from orbit speed to subsonic speed above the atmosphere and then fight gravity until it is possible to deploy parachutes. All that using rockets thrust to decelerate. No heat shield necessary. But you need a very large rocket with at least two stages in orbit attatched to the spacecraft. About that size necessary to lift the spacecraft from ground to orbit.

But you would need multiple rockets of Saturn V size to lift the spacecraft and the rocket for return into orbit.

It is much cheaper to use the atmosphere for braking using a heat shield. Entering the atmosphere with hypersonic speed will transform energy from speed into heat. Much slower airplanes faster than sonic heat up too. You can't get atmospheric drag to slow down and lift to keep height without the heat caused by compression of air. Thats physics.

No manned orbital missions like Soyuz, Mercury, Gemini and Shuttle would have been possible using this slow and cool reentry.

Let's try to work out what a slow reentry would be.

A spacecraft on orbit balances the Earth's gravity with the centrifugal force in the oribital reference frame to keep altitude. This orbital lift is proportional to $v^2/r$, where $v$ is the spacecraft's speed r is the radius of the orbit.

Once the spacecraft slows down below the orbital speed it will need some additional lift to maintain altitude and balance it with Earth's gravity, so:

Where $L$ is the lift needed. And $g$ is the standard gravity. The best lift-to-drag ratio you can get based on what I found is:

Where $M$ is the mach number. or to turn this into metric in meters per second it is approximately:

Speed of sound is temperature dependent but so for simplicity I assumed room temperature. In real life it would vary as temperature of air changes during descent.

This is an empirical maximum, Concorde had the lift to drag ratio of 7 at 2 Mach. So really that factor is more like 3 than 4 if we consider all design compromises. So this means we can get a lift of $3k(v+1000)$ and the corresponding drag of $kv$. Where $k$ is a scale factor that can be controlled by changing altitude (eg. to increase it you'll need to descend into a denser atmosphere). $k$ is measured in units of 1/s so the lift is given in terms of acceleration (force per mass if you like).

The $kv$ is the drag that is the rate of deceleration during reentry. And then the heat produced in an unit time is given by the product of the drag force times the speed. That is $kv^2$.

So the plot of deceleration ($kv$) is: 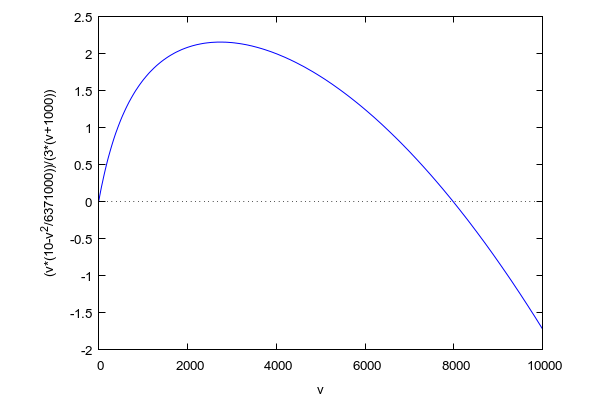 Which shows the deceleration would be very gentle, just 0.2g at peak. 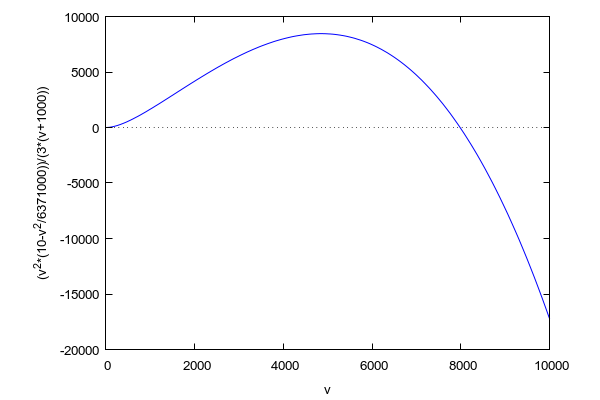 Which at the peak shows about 8kW/kg heat production. So for an 1 ton spacecraft it would be 8MW heat production at peak. Probably the majority of this energy is dissipated into the surrounding air rather than absorbed by the craft, but it's still a lot of energy that needs to be handled.

Moreover a high lift design is likely a waverider that purposely rides the shock wave created by it. So it's in contact with the plasma. And since the peak deceleration is just 0.2g it would take like 2-3 hours to slow down and land, so the vehicle would need to endure the hot plasma that long.

If we can solve this problem and find a way to harness this energy to eg. genenrate fuel, then waveriders will make sense. But until that it's easier to just plunge through the atmosphere as quickly and possible and hope the heat shield of spacecraft doesn't burn through in the process.

Not the answer you're looking for? Browse other questions tagged reentry aerodynamics aerobraking or ask your own question.

2
why dose reentry speed need to be so fast
2
Why not bring a rocket to idle velocity for less violent and safer re-entry?
13
Could you take a Cessna from the ISS to Earth?
10
Challenging the Kármán line from above
2
Orbital reentry glider with no heat shield

14
At what altitude does transonic compressibility become a non-issue?
6
Is high velocity feathered configuration reentry possible?
15
When does an aerobraking space craft create a sonic boom?
23
Gliding into the atmosphere
10
Challenging the Kármán line from above
0
Could a reentry powered monorail and flywheel make a kinetic engine for lift?
19
Why can't you just parachute down right from orbit?
2
Orbital reentry glider with no heat shield
5
Why does the Apollo reentry trajectory show a few climbs?
2
Atmospheric reentry drag and friction