Is a sun-blocking orbit possible?

Is it possible for an orbital "sun shade satellite" to have a geosynchronous equatorial orbit such that it is in an approximately straight line between the Sun and a fixed point on the Earth's equator?

If it is possible, what diameter would the satellite need to have to block all direct sunlight? (I do realise that diffuse sky radiation prevents shadowing.) Obviously, it would need to be 32 arc minutes at apogee, but it may need to be even larger to account for necessary misalignment due to its orbit.

I have looked for online orbital simulators to try this, but was unable to find any that both included the direction of the sun and also allowed tracking a fixed point on the Earth's surface. I envision an elliptical orbit where the satellite has higher orbital velocity in the Earth's shadow to "catch up" and be ready for sunrise at the fixed equatorial point. Something like this: 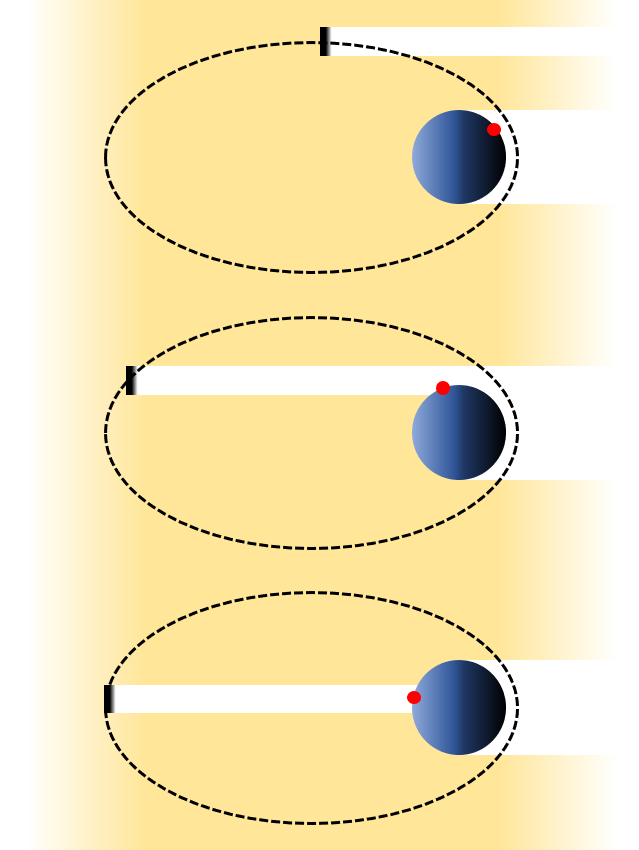 Is a sun-blocking orbit possible?

Let's see what happens with the math.

For now let's use 2D and imagine the Earth's axis isn't tiled but points straight out of the plane.

Using the vis-viva equation (the only equation I can remember):

where $GM_E$ is the standard gravitational parameter of the Earth, about 3.986E+14 m^3/s^2. Simplifying for a circular orbit and moving things around gives:

which yields a semi-major axis of about 1.84 million kilometers. That's well past the L1 Lagrange point and the Earth's Hill sphere (about 1.5 million km, see this answer for how to calculate it) where the Sun's gravitational influence becomes as important as the Earth's.

So for such a slowly rotating Earth, a circular orbit is not going to work.

If Earth were rotating say perhaps twice as fast, the orbit would be smaller and there might be a chance it would work for a short span in the middle (an hour or so) for a short time (weeks or months) for a few days in the Summer or Winter, but perturbations from the Sun would cause an object in orbit so far from the Earth to drift off.

EDIT: But, what about an elliptical one as shown in the question? We can say that the periapsis is 400 km altitude minimum and re-solve. I know it can be done mathematically but I'll do it graphically: 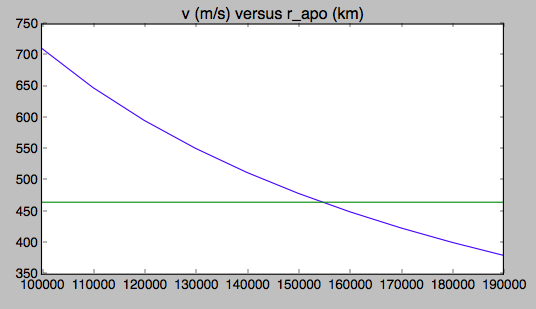 With a periapsis of 6378+400 km, and an apoapsis of about 155,000 km, bingo, for the unrealistic 2D scenario, one can match the lateral speed of a point on the Earth, occasionally, from time to time.

Hmm... Place a very dense mass at Sun-Earth L1 lagrangian point, (or thereabouts; such object is bound to change the actual location of our L1) and put a satellite in its orbit of 1 day period (synodic), minimally less than Earth radius of orbit radius and Earth axial tilt worth of inclination.

With the satellite sized sufficiently to create actual umbra from there, it might work.

That per synodic day is 459.2 m/s - that's the orbital velocity of our satellite.

Now our satellite. It must cause a total eclipse of Sun, angular diameter 0.5 degree, so it must be 0.5 degree at 0.01AU. Using Lagrange Point Finder, and Angular Diameter Calculator, I obtain about 13,000km of diameter. Larger than Earth (diameter 12,742 km) - but should be hollow/thin not to exert significant mass on the central body.

It seems we'll need to make the satellite more massive, the "central body" less massive, and put them in a mutual orbit as a binary system with barycenter at L1. That way, at least, the solar pressure won't send it flying away as an enormous solar sail.

Is it possible for an orbital "sun shade satellite" to have a geosynchronous equatorial orbit such that it is in an approximately straight line between the Sun and a fixed point on the Earth's equator?

A satellite in GEO will only be directly between the Sun and it’s spot on the equator a couple times a century. But it comes close twice a year.

Viewed from the spot on the Earth under the satellite, the Sun moves north and south as the Earth goes around its orbit (remember seasons?).

The Sun is directly overhead the equator just at the two equinoxes: twice a year. If the equinox is at local noon, it’s overhead. But most equinoxes aren’t at local noon.

At the equinox, the Sun moving north or south by about one minute of arc per hour. That means it can be up 12’ north or south at its closest approach. Your sun shade size needs to take that into account or you won’t get total dark.

If it is possible, what diameter would the satellite need to have to block all direct sunlight? (I do realise that diffuse sky radiation prevents shadowing.) Obviously, it would need to be 32 arc minutes at apogee, but it may need to be even larger to account for necessary misalignment due to its orbit.

The other thing you’ll want to consider is how long you want the Sun to be covered. At its minimum size, the shadow just touches the Earth with its tip: it goes by instantly. A bigger shade makes a bigger shadow, which takes longer to go by. This is analogous to solar eclipses. 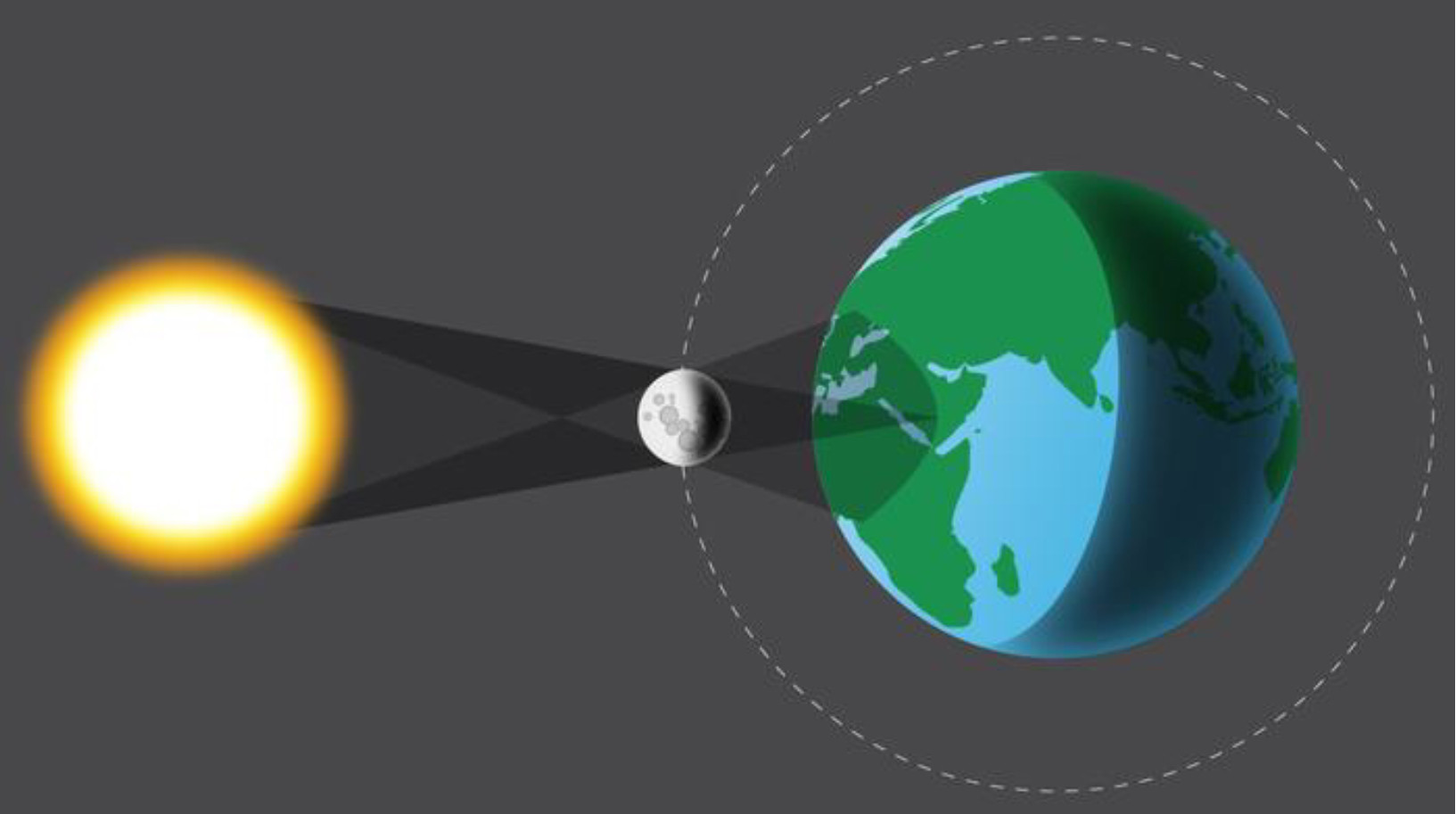 Not the answer you're looking for? Browse other questions tagged orbital-mechanics artificial-satellite orbit the-sun sunlight or ask your own question.

7
How could a satellite follow earth around the sun while staying outside of earth's orbit?

10
How much “wobble” does a typical geostationary satellite experience?
14
Can the Sun set twice during the same day on Mercury?
3
How are “terminator-riding” sun-synchronous satellites never passing over the pole?
4
How much radiation shielding would be required for a habitat at Mercury–Sun L5?
1
How large would be the seasonal variation of eclipse duration for a spacecraft in LEO?
1
Can modified solar sail use Earth's atmosphere to correct an eccentric orbit?
5
What is the functional form for r(t) for a solar-sail deorbit into the Sun?
2
Would a lower LEO ISS orbit really have a shorter eclipse duration than a higher one?
5
Why put X-ray telescope Spektr-RG/eROSITA all the way out at Sun-Earth L2?
3
Why do orbits in the Iridium constellation have an inclination of 86.4°?