Where can I buy lunar regolith simulant?

I am a high school student living in Canada that needs lunar regolith for a science experiment? Anyone know where to buy simulant of it?

So there are a variety of lunar regolith simulants, however, many are commercially unavailable. One such simulant that I have had experience in the past with is known as BP-1. It is a fine dust mined in Arizona. I was unable to find a purchase link.

Another option is crushed limestone: https://www.amazon.com/Pounds-Carbonate-Limestone-Amendment-Fertilizer/dp/B00AL1E4H8 Crushed limestone usually has a comparable particle size and is readily available. It is worth noting that all of these simulants vary drastically from the actual chemical composition of lunar dust, and can only mimic the physical qualities.

One final thing to note is that many lunar regolith simulants can be somewhat dangerous in the long term due to their incredibly fine particulate size. I have been told that they are minorly carcinogenic and have first hand seen vomiting and coughs persisting for several days after extended exposure. Please, at the very least, use safety masks commonly used for dusty operations from your local hardware store and perform the task in a well ventilated area.

Saw this post and it's pretty outdated, figured I'd give a 2020 update to this post. Best simulant regolith can be found at Exolith Labs. The previous posts mention the same lab, but they've expanded on their research and product line, making them a reliable, legitimate simulant production lab. They have a variety of lunar, asteroid, and Martian regolith simulant to choose from. I heard they're also currently developing a Phobos simulant and lunar dust simulant! They can also custom make your regolith if you require anything specific, such as a defined particle-size range. Highly recommend these simulants, they get contracted by NASA, Space X, Blue Origin, and the ESA all the time to make simulant for them. I currently use their regolith for my research and couldn't be happier. The link is of their new website! 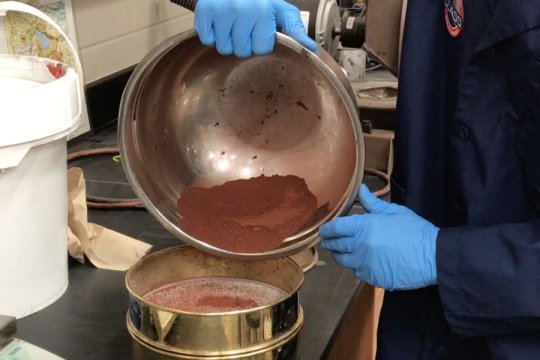 10
Is lunar regolith available for purchase?
13
Is there dirt or its structural equivalent on Mars?
2
How to make diamagnetic lunar simulant that would "float" in a strong enough magnetic field? (for China's 60 cm high field simulator)

4
"Lunar vacuum cleaner": Design considerations for regolith dust suction system in exospheric conditions
10
How deep is the regolith around this crater?
4
When estimating radiation doses inside a lunar habitat, what assumptions are made as to shape?
12
How much total lunar mass remains viable for analysis here on Earth?
2
Can anyone find a more recent NASA paid for study on lunar tunnel-boring machine?
6
DIY Lunar regolith simulant
2
Antenna wrap material suitable for lunar & cis-lunar environment