Is there anything like a standard for maximum temperature for mission-critical electronics in spacecraft?

In addition to radiation, acceleration, and vibration, a launch vehicle can encounter excursions in temperature, and critical electronics for guidance and control should probably be resistant to excursions that exceed limits beyond which its reliability decreases significantly.

Question: In general though, is there any information about a standard or guideline for maximum temperature for mission-critical electronics in spacecraft?

Barring the availability of any good sources for a temperature, is there any information or indication that might suggest 200C would make some components "unhappy"? For that context, the situation would be that this is a non-launch situation and the components, though not in use, would be exposed for hours.

The typical temperature range for space-qualified electronics components is -55C to +125C (at the case). The spacecraft is designed to keep the components within their qualified range, usually with a 15C margin on each side, so -40C to +110C. Batteries have a smaller range, requiring more thermal control for their location, e.g. -20C to +40C for Li-ion.

Spaceflight hardware tends to be extensively designed. So you'll see documents that talk about the "thermal management plan" that design for specific temperatures at specific places, then quality plans to check those calculations, and test plans to confirm them further.

Air Force Space Command's SMC-S-016 "TEST REQUIREMENTS FOR LAUNCH, UPPER-STAGE AND SPACE VEHICLES" controls some of this activity on the test end. It gives some idea of what's involved:

For critical electrical and electronic units designed to operate in a vacuum environment less than 0.133 Pa (0.001 Torr), thermal mapping for known boundary conditions may be performed in the vacuum environment to verify the internal unit thermal analysis, and to provide data for thermal mathematical model correlation. Once correlated, the thermal model is used to demonstrate that criti- cal part temperature limits, consistent with reliability requirements and performance, are not exceeded.

When electrical and electronic packaging is not accomplished in accordance with known and accepted techniques relative to the interconnect subsystem, parts mounting, board sizes and thickness, number of layers, thermal coefficients of expansion, or installation method, development tests should be performed. The tests should establish confidence in the design and manufacturing processes. Heat transport capacity tests may be required for constant and variable conductance heat pipes at the unit level to demonstrate compliance. Thermal conductance tests should be considered to verify con- ductivity across items such as vibration isolators, thermal isolators, cabling, and any other potentially significant heat conduction path.

Engineering Development Units (EDU) of cryogenic systems may be tested in a vacuum environment for early verification of system performance and margins, and assessment of parasitic heat leaks. A thermal balance test may also be conducted to demonstrate thermal control hardware and subsystem performance and to collect data for thermal model correlation.

The tests that result from this end up being complex, as they try to reproduce the entire sequence of conditions encountered: 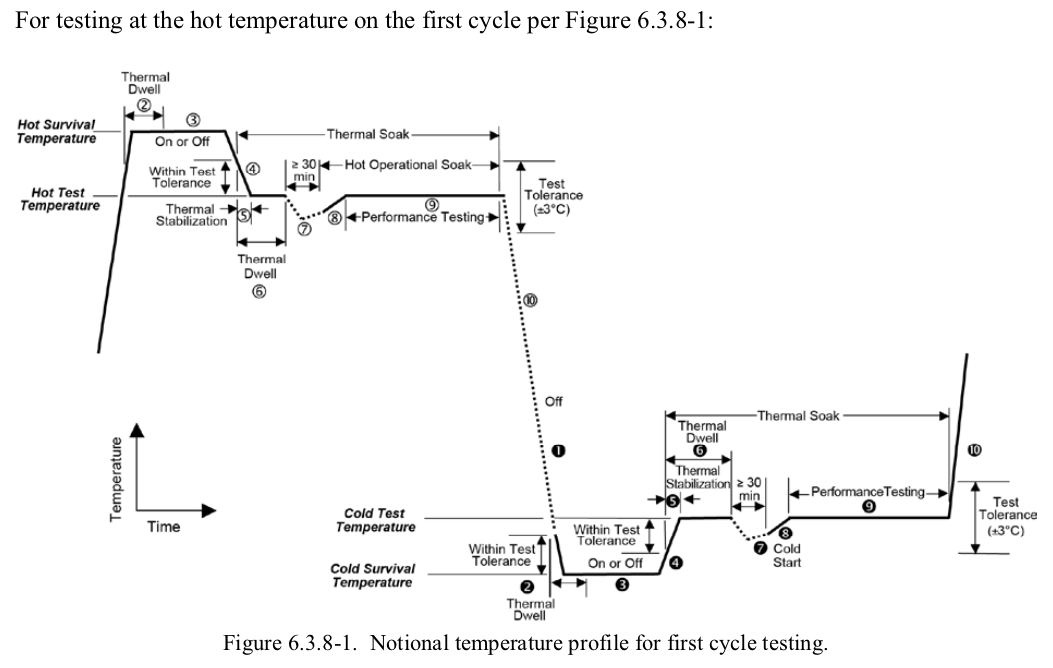 In short, I'm not aware of any "standards". There are some vague norms though these will depend upon the context.

The most important two bits of context are:

How you are defining temperature

You can refer to the temperature of a semi-conductor junction or the outside of its case, the board its mounted on, the baseplate of the box that the circuit board is in or the panel of the satellite. Any of these are different representations of the environment temperature. If the component is dissipative then there will be a wide variation in temperature across those different cases. As a purely made up example, with a baseplate in the range 40 - 60degC the junction of a power transistor could easily be in the range 110 to 130degC. The limit for such a component on a manufacturer's datasheet will depend on the current going through it.

The old world of big expensive satellites de-rates components for lifetime. That is, you take the maximum power that you want to operate the component, look up the permitted temperature as per the datasheet and then take off, say, ten or twenty degrees (again made up example) for a 10 year life and some other figure for a low duty cycle, if applicable and work out your new, lower, maximum temperature limit.

This derating bit is a probability game. Its not the same as finding a temperature limit that is both necessary and sufficient. You just get more failures at higher temperatures over a period of time. I suspect that the conventions that lead to this sort of derating, despite being spelt out in all sorts of Mil-HDBKs, are probably so arcane as to defy exact explanation. Perhaps someone else on this forum could help out with that bit!

I suspect also that there maybe a modern ground swell that says this is too conservative, though this very much comes down to you (or your customer's) risk appetite. I think it would be a very interesting topic as regards bringing the cost down though.

The comments to the related question you mentioned on space certification also all looked relevant to me, particularly the "New Space companies are kind of on their own".

7
What is "aerospace grade"?
7
Would it be possible to build a probe that could operate at about 480 °C (900F degrees) without insulation?
5
Why are these Falcon 9 1st stage bodies (apparently) wrapped in black plastic for transport?
4
Is there a space-certification procedure used by commercial spacecraft manufactures for electronic components?
4
Resources/guidelines on space electronics compliance?
3
Taking photos from Venus surface from an airship. Possible?
1
What is a "diode heat-pipe" and why is it considered passive?

11
Are there any studies on the ideal form for a spacecraft at large velocity in vacuum?
4
Is there a space-certification procedure used by commercial spacecraft manufactures for electronic components?
12
Is it possible to get a spacecraft into earth orbit using Linear Eddy Current Braking on an orbital runway?
10
Vacuum tube microchips for Venus probe; feasibility and challenges?