It is following a transitional path between Venus's Lagrangian points L$_5$ point and L$_3$ point, and is also a Mercury grazer and an Earth crosser.

With a diameter of about 62 to 138 meters, could this asteroid be altered in its orbit with today's rocket engines in such a way that eventually it could become a moon of Venus ?

If it reaches Earth and Mercury, then it already sounds like the delta-V requirements for Venus capture are beyond hope.

If it were to make close approaches to Venus, you might think of using Venus assist to "circularize" its solar orbit at same altitude as Venus around the Sun, putting it in a very elongated orbit, with apoapsis somewhere towards Sun-Venus L4, on non-insane delta-V budget. A minuscule nudge to generate just the right assist against Earth to get it into the trajectory of assist against Venus. Another small nudge during the Venus fly-by to turn the fly-by into a weak capture (its orbital specific energy is already nearly identical to Venus, 1:1 resonance spells that - so the total energy change would be really small), and we're done, Venus gets a moon in a very eccentric orbit. We could even drop the periapsis a little to give it some airbraking for a couple decades to get into more stable, lower orbit, then nudge it back up so that it won't fall down eventually.

The concept would be like this (obviously, all dimensions are exaggerated, eyeballed and generally wrong; it's about the idea, not details. 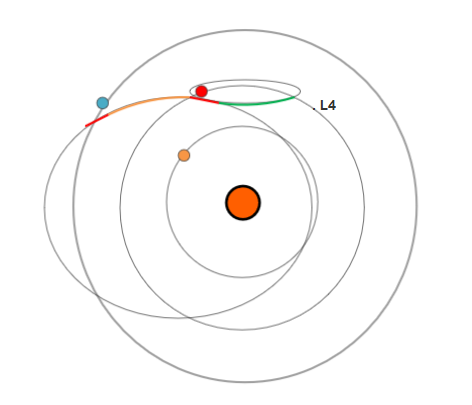 The red sections of the trajectory depict areas of maneuvers - first, against Earth, a small trajectory adjustment to make the flyby against Venus just right. Then against Venus - as Venus provides assist turning the orbit "outwards" - instead of towards Mercury, to one more along own orbit, the engine fires retrograde to prevent the asteroid from escaping Venus gravity. This would put the asteroid in Venus orbit. L4 is just marked for informative purposes - it doesn't actually play any role in this maneuver.

Unfortunately, Venus is not as conveniently located.

If $2012 XE_{133}$ passes the Venus orbit between L3 and L5, that means Venus is practically on the opposite side of the Sun from it, and so, the only thing that could circularize its orbit there left are rocket engines. And while the value of the specific energy is about right, the direction of the vector of velocity associated with the kinetic energy is way off. The entire circularization into Venus-like orbit would require an enormous, completely prohibitively expensive burn in direction normal to the trajectory. And then the asteroid would still need to catch up with Venus and be inserted into its orbit. 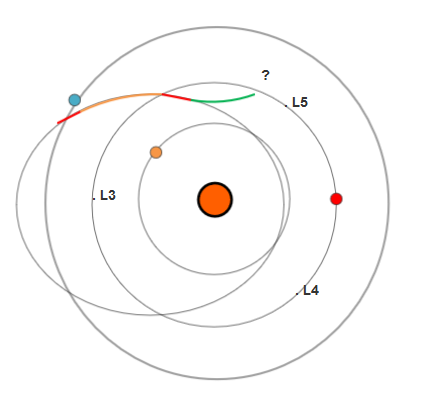 Not the answer you're looking for? Browse other questions tagged orbital-mechanics rockets asteroid venus rocket-equation or ask your own question.

10
Could we deal with an asteroid threat given current technology?
4
If the Dawn probe visits a third asteroid after Ceres and Vesta, which asteroid could it visit?
1
Hybrid / solid rocket engines with large carbon content
6
Could metal sulfates stay in the sulfuric acid layer of Venus?
2
Would not getting asteroid 2013 ND$_1$$_5$ into a polar orbit be the easiest way for it to become a moon of Venus?
2
Will asteroid 2015 YA have a collision with Venus in october 2018?
36
Could the Saturn V actually have launched astronauts around Venus?
0
Need help with 'Tsiolkovsky's Rocket Equation': What's the maximum weight of my rockets command module?
4
How big an asteroid could we take out with an ICBM?
3
I don't know where to start with the calculations - rocket engine