What is the nature of a “flux tube” between Saturn and Enceladus, and what does “L‐shell=4” mean?

The NASA JPL YouTube video Sounds of Saturn: Hear Radio Emissions of the Planet and Its Moon Enceladus (below, also here) provides and audio and spectral representation of plasma waves recored by Cassini as it passed between Saturn and it's moon Enceladus shortly before Cassini's end of mission.

The abstract of the first paper reads as follows:

Cassini's Radio and Plasma Wave Science (RPWS) instrument detected intense auroral hiss emissions during one of its perikrone passes of the Grand Finale orbits. The emissions were detected when Cassini traversed a flux tube connected to Enceladus' orbit (L‐shell = 4) and at a time when both the spacecraft and the icy moon were in similar longitudes. Previous observations of auroral hiss related to Enceladus were made only during close flybys and here we present the first observation of such emissions close to Saturn. Further, ray‐tracing analysis shows the source location at a latitude of 63°, in excellent agreement with earlier UVIS observations of Enceladus' auroral footprint by Pryor et al. (2011). The detection has been afforded exclusively by the Grand Finale phase which enabled sampling of Enceladus' high‐latitude flux tube near Saturn. This result provides new insight into the spatial extent of the electrodynamic interaction between Saturn and Enceladus.

Question: What is the nature of a "flux tube" between Saturn and Enceladus? Does this refer to magnetic lines flux, or flux of particles, or something else. Also, what does "L‐shell=4" mean?

A "flux tube" is a magnetically-confined conduit that allows charged particles to flow between one place in a planet's magnetosphere and another.

An "L-shell" is a subset of a planet's magnetic field lines that cross the planet's equator (for most planets, anyway) at the specified number of planetary radii from the planet's center.

Net result: charged particles have an easy time of traveling along magnetic field lines, but traveling significant distances perpendicular to the field is nearly impossible. The flux tube is like a conductor surrounded by insulating material.

If there is a potential difference between the planet and a moon traveling in the magnetic field, charged particles can easily flow along the flux tube from the moon to the planet, or the other way. That flux tube will follow the usual toroidal geometry of a dynamo field, so for most moons the tube connects to the planet somewhere near the poles.

An L-shell is a toroidal surface within a dynamo field. If you imagine all the field lines that pass through the equatorial plane at a specified radius, say at 4 planetary radii from the center, and follow them all to the poles, you get a toroidal surface. Anything within that surface is said to be "at L = 4" or "at an L-shell of 4". L = 2 would intersect the equator at 2 planetary radii, and so on. So a flux tube within the L = 4 L-shell would be said to be "at L = 4".

The image below described further here, from Cassini shows (at ultraviolet wavelengths) two things: 1) the "normal" aurora at very high L-shells (thus closer to the pole), arising from charged-particle currents generated at many Saturn radii, where the solar wind and Saturn's magnetic field interact; and 2) the much smaller spot where the Enceladus flux tube, carrying the charged-particle currents, intersects Saturn's atmosphere and makes its own little aurora (in the white boxes).

As a Ph.D. student I was in a research group with people that worked with these all the time. Not only could the flux tubes guide charged particles, they can guide radio waves, so these folks would inject powerful radio signals into specific regions and see how the magnetosphere responded. 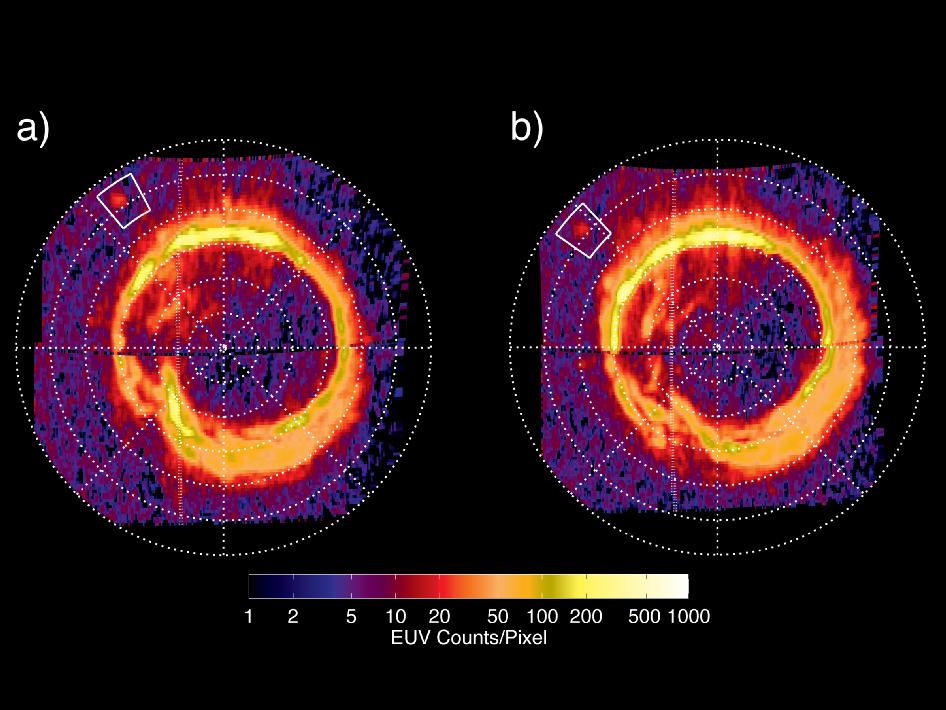 NASA's Cassini spacecraft has spotted a glowing patch of ultraviolet light near Saturn's north pole that marks the presence of an electrical circuit that connects Saturn with its moon Enceladus. This newly discovered patch occurs at the "footprint" of the magnetic connection between Saturn and Enceladus and indicates electrons and ions accelerating along magnetic field lines. White boxes indicate the location of this footprint, which scientists have long predicted but never before seen.

The patch glows because of the same phenomenon that makes Saturn's well-known north and south polar auroras glow: energetic electrons diving into the planet's atmosphere. However, the footprint is not connected to the rings of auroras around Saturn's poles.

The footprint appeared at about 65 degrees north latitude. It measured about 1,200 kilometers (750 miles) in the longitude direction and less than 400 kilometers (250 miles) in latitude, covering an area comparable to that of California or Sweden.

In the brightest image the footprint shone with an ultraviolet light intensity of about 1.6 kilorayleighs, far less than the Saturnian polar auroral rings. This is comparable to the faintest aurora visible at Earth without a telescope in the visible light spectrum.

Not the answer you're looking for? Browse other questions tagged magnetic-field saturn cassini plasma or ask your own question.

3
Saturn is “singing” to Enceladus?

4
Is Cassini equipped for detection of non-water-based exobiology?
6
What is the intensity of radio noise around Jupiter and Saturn?
13
What are the “crossing beams of light” in the Cassini images taken during Enceladus plume flyby?
8
Why would Cassini need to reach 64 degrees inclination before “threading the needle”?
1
What is the solar flux on Titan?