Spiraling out from circular orbit to escape via low thrust, what is γ (gamma)?

@MarkAdler's comment led me to ask Why would a slow spiral from a C3 of zero take about 2.4 times as much ΔV as an impulsive maneuver? which resulted in this tidy and efficient @MarkAdler answer which points to another thoughtful answer about slowly spiraling out from a circular orbit to escape in the limit of very weak prograde propulsion, which (at first counterintuitively) slows you down while raising your orbit.

Below that answer is yet another easter-egg-like comment gem.

Always aligned with the velocity vector. That is the most efficient use of the thrust in order to increase the specific energy. The final γ is 31°†.

Question: In this context, what is the angle γ? How is it defined? 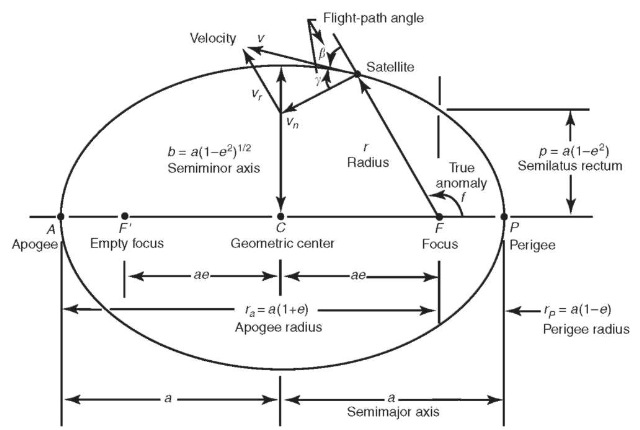 I have seen people taking the flight path angle as the one subtended between $\vec{e}_r$ and $\vec{v}$ ($\beta$ in the image). However, in my opinion, it is quite confusing since it not coincide with the aircraft definition of flight path angle (using $\gamma$ does coincide).

Not the answer you're looking for? Browse other questions tagged orbital-mechanics orbital-maneuver mathematics or ask your own question.

19
Dawn Spacecraft: Why are the orbits so high?
10
General guidelines for modeling a low thrust ion spiral?
9
Calculate flight path angle given semi-major axis, eccentricity and distance from the focal point
2
Why would a slow spiral from a C3 of zero take about 2.4 times as much ΔV as an impulsive maneuver?
3
How to calculate the flight path angle, γ, from a state vector?
5
References for constant low-thrust spiral up-coast-spiral down phasing maneuvers for circular and non-circular orbits?
5
What does a low thrust apoapsis raising look like?
5
How much thrust is "high" thrust (for orbital transfers)
3
Low-thrust spiraling to escape, is the flight path angle (gamma) at C3=0 always 39 degrees?
2
Orbital vocabulary confusion! How can the tangential velocity of an elliptical Kepler orbit not be tangent to the orbit?
See more linked questions

5
What would your altitude be after you had achieved escape velocity from the moon?
3
Low-thrust spiraling to escape, is the flight path angle (gamma) at C3=0 always 39 degrees?
1
How to find the transfer orbit from a initial circular orbit to a final elliptical orbit
4
How do I calculate re-entry velocity when decaying from a circular orbit?
4
What information can I get if an elliptical orbit intersecting a circular orbit of radius 𝑟 and velocity of ellipse is equal to velocity of circular?
5
What does a low thrust apoapsis raising look like?
2
Thrust value for space mission from Earth's orbit to Venus' orbit
7
Why (the heck) did Tianwan-1 insert into a low inclination orbit then execute a plane change from 11.8 to 86.9 degrees?
5
References for constant low-thrust spiral up-coast-spiral down phasing maneuvers for circular and non-circular orbits?