The Soyuz space ship uses an atmosphere of 21 % oxygen and 79 % nitrogen at a pressure of 1 bar, just like the ISS.

In case of emergency when the capsule looses pressure, the inhabitants will breathe the gas from their closed suits. But for enough flexibility of the suit and gloves, the suit pressure is lowered to 0.4 bar. When the suit is too rigid, the pressure may be reduced further to only 0.27 bar.

The pressure drop from 1 to only 0.4 bar (less than 1/2) may cause decompression sickness if the cosmonauts breathed air all the time before launch and during flight. This risk may be reduced by breathing pure oxygen for some hours before launch. The amount of disolved nitrogen in the body will be reduced this way.

Do the cosmonauts breathe only air before launch, or pure oxygen to prevent decompression sickness?

TLDR: Crews for 1 bar missions, including Soyuz, don't seem to have ever used pre-breathing. Earlier missions that were headed for long-term lower pressure environments did, as do people doing lower-pressure space walks. There's some evidence that the risk of high-oxygen pre-breathing was considered larger than the risk of decompression sickness.

There's a NASA Human Research Program report on "Risk of Decompression Sickness" (link is to a non-paywalled undated version) that also discusses pre-breathe protocols. Astronauts for SpaceLab, Apollo and earlier were headed for flight environments at lower than 1 bar pressure and used pre-breathing. The Space Shuttle program, which had a 1-atm environment, did not have a protocol to pre-breathe before flight, but did use it for EVA.

The various descriptions of Soyuz crew timelines (here, here, here) don't seem to have any time for pre-breathing; suits are closed up only at the last minute, and crew photos show them walking and sitting without breathing masks.

What are the trade-offs involved in pre-breathing vs not?

There's a 1999 NASA study "An Evidenced-Based Approach for Estimating Decompression Sickness Risk in Aircraft Operations" that provides upper limits on the risk: 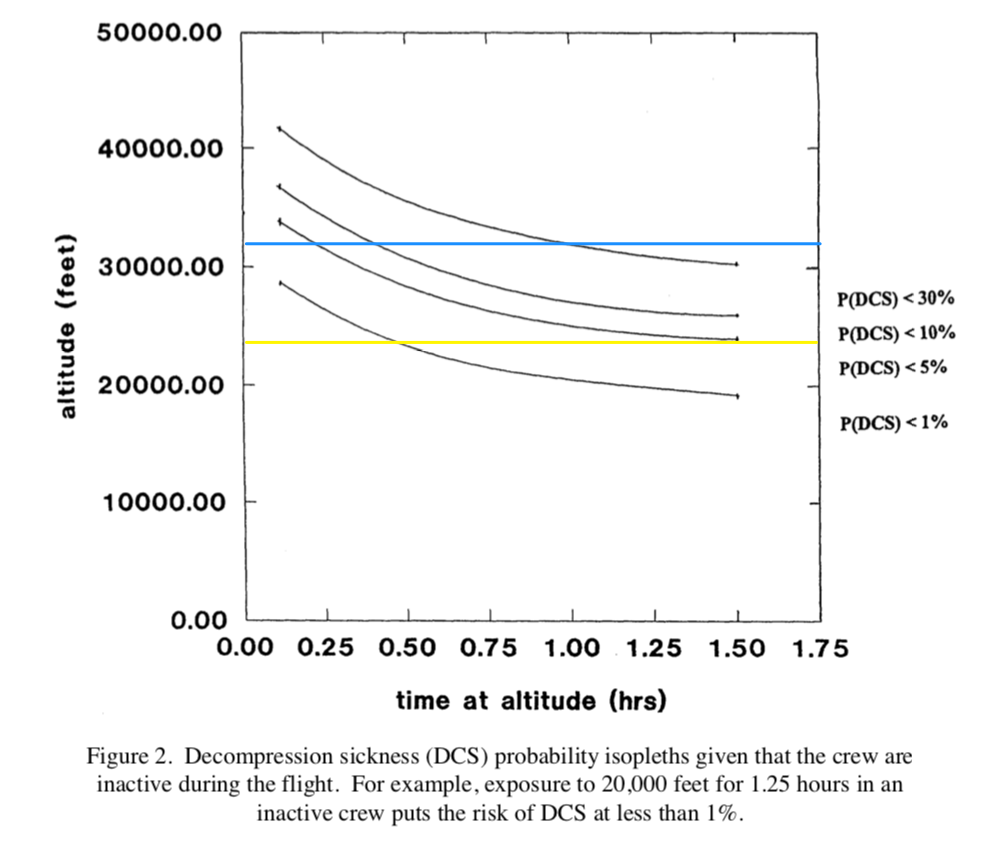 As an aside, their methodology provides some insight on that:

The typical flight profile for the NASA T-38 is an ascent to approximately 41,000 feet above mean sea level over a period of 15 minutes, cruise flight at altitude for approximately 1.3 hours, and 10 minutes for descent and landing. The cabin pressurization schedule is ambient pressure until one ascends to 8,000 feet (10.9 psi), maintains the pressure at 8,000 feet equivalent until one ascends to approximately 23,000 feet (5.9 psi), and above that maintains the cabin pressure at a 5-psi differential. NASA flight crew do not routinely prebreathe 100% oxygen and typically fly with the oxygen regulator (CRU-73/A) in the “normal,” diluter demand mode. The percent oxygen in the breathing mixture is variable, based upon the normal variability of the oxygen regulator, but is designed to maintain a sea level equivalent oxygen tension in the aviator’s blood.

Approximately 600 flights per year are conducted in NASA T-38's. A review of 20 years of aircraft operations safety data reveals approximately one cabin pressure system failure every two years, and no reported occurrences of DCS (Personal communication, NASA/JSC Safety Office, Ellington Field). Assuming 20 years of 600 flights per year and no observed DCS, the probability of DCS is no greater than 0.025% for each flight (95% upper confidence limit as n 1/n expressed by solving (1-p) = 0.05 or p = 1-(0.05) ). An analogous review of USAF T-38 flight operations revealed 294 cases of cabin pressurization system failure for the years 1987 to 1992, at altitudes ranging from 17,000 to 43,000 feet (Personal communication, Headquarters, Air Force Safety Center, Kirtland AFB).

The decompression risk has to be weighed against the risks of pre-breathing pure oxygen. Oxygen with a partial pressure of over 0.4 atm (0.3 in some literature) is considered a medical hazard over multi-hour timescales. For example:

Prolonged exposure to above-normal oxygen partial pressures, or shorter exposures to very high partial pressures, can cause oxidative damage to cell membranes leading to the collapse of the alveoli in the lungs, retinal detachment and retrolental fibroplasia in the eye, and seizures. A decline in pulmonary function testing can occur within 24 hours of continuous exposure to 100% oxygen. After 48 hours on 100% oxygen diffuse alveolar damage, atelectasis, and acute respiratory distress syndrome (pulmonary edema) can occur.

In healthy humans breathing more than 95% oxygen at normal atmospheric pressure (0.1 MPa), tracheobronchitis develops after a latent period of 4 to 22 hours

Four hours is only marginally longer than usual pre-breathing schedules:

A minimum 3-hr in-suit PB was performed before launch in all NASA programs prior to the Shuttle (Maio et al. 1970) symptoms consistent with DCS while at 5.0 psia. Michael Collins, during Gemini X and later during Apollo 11, believed he had symptoms of pain-only DCS in his left knee that eventually resolved in the 100% O2 atmosphere as the missions proceeded (Hawkins & Zieglschmid 1975). This was not an unexpected outcome based on previous PB validation trials reported by Maio et al. (1969, 1970). Astronauts on subsequent EVAs from the Apollo spacecraft and Skylab, as well as on moon walks from the Lunar Module, in suits pressurized to 3.7 psia were not at risk for DCS due to denitrogenation during their extended time in the hypobaric and hyperoxic breathing environment.

As an aside, there are other possibilities besides high-O2/low-N2 pre-breathe gas: Mixtures with either helium or argon avoid N2. But both of those gases add other complications: High helium atmospheres tend to diffuse into systems and packaging, and argon has physiological issues that require a lot of supervision during breathing. I didn't find any evidence that either was ever being developed for use in space-flight pre-breathing.

Not the answer you're looking for? Browse other questions tagged soyuz-spacecraft sokol-spacesuit or ask your own question.

4
How did the atmospheres of Soyuz, Shuttle, Mir, and ISS compare?

16
Do American astronauts wear Sokol space suits when flying on a Soyuz?
15
How similar are Soyuz and Progress?
6
Emergency plan for Soyuz missions
6
What abort modes does Soyuz have in space?
15
How do astronauts and cosmonauts sleep on a Soyuz?
4
Could the Soyuz/Progress supply and crew a space station in Lunar orbit?
7
Soyuz has a Space Periscope?
14
Are SpaceX new space suits inferior to existing ones in terms of usability?