What is the fastest can we or have ever traveled in space?

What is the fastest vehicle currently in space? At what speed with our technology currently does physics restrict our speed limits in space?

If you want speed, look for mass. Things closest to the Sun will tend to be moving the fastest.

For example the Messenger spacecraft reached almost 63 km/s when in an elliptical orbit who's perihelion matched Mercury's position.

In the 2nd plot you can see the red line (speed wrt Mercury) drops to a very low value in 2011, that's when it entered into orbit around Mercury.

I have estimated that In the future the Parker Solar Probe will reach about 195 km/s as it passes within a few million km of the Sun!

Data below from JPL's Horizions. 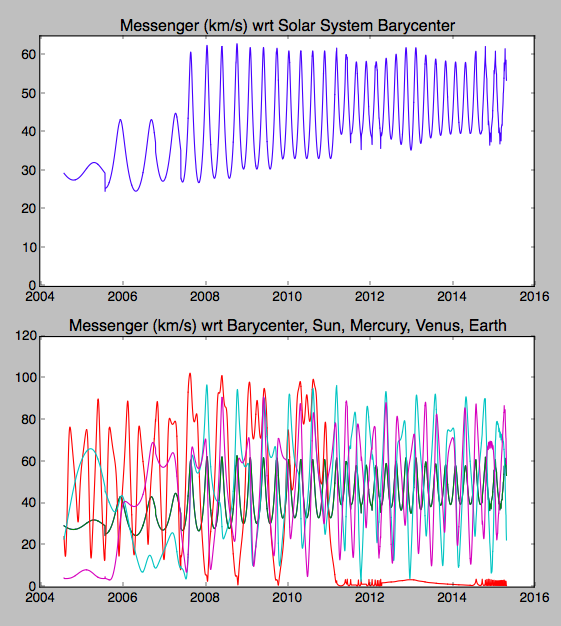 The only absolute limit imposed by physics is the speed of light, but with our current technology -- reaction engines based on Newton's laws of motion -- we're limited by practical engineering issues and Tsiolkovsky's rocket equation to speeds on the order of 1/10000 of the speed of light.

I think it's useful to note that the whole concept of fastest velocity in space is some confusing.

For example - altough Parker Solar Probe will be the fastest spacecraft even made, it will not have enough velocity to ever reach Mars from it's trajectory. Paradox?

Spacecraft are not like race cars on track where the fastest wins.

The better analogy are cars at a road in mountain region. The vehicle in a valley can have big velocity 120 km/h, but it's not enough to drive at the top of 1-km-high mountain by inertia only. Opposite, another car at the mountain's top can drive slowly 20 km/h, but it's total energy (kinetic + potential) is higher that the energy of the first car in the valley. If we drive the second car down from 1-km mountain without breaking, its final velocity will be insane.

It's the same for spacecraft. The total energy (kinetic + potential) of a spacecraft tells us where it can fly and where can not, and how much time we need to reach our target.

As far as I know the New Horizons spacecraft was the fastest ever space probe launched into space with a speed of 16.26km/s and there are other type of speed records held by Helios an Juno spacecrafts.

The below link is worth checking

Not the answer you're looking for? Browse other questions tagged spacecraft observation travel record velocity or ask your own question.

27
What is the fastest speed ever reached in space travel as measured from the point in space from which it was launched to its current/final position?
11
Why is Voyager/Pioneer so slow compared to Parker Solar Probe?
6
Velocity of the Parker Probe when it will be given final boost by the rocket?
7
Generating plot of LV's performance as a function of the C3 parameter
13
Where would the Pascal B manhole cover be now?
4
Fastest Manmade Object
1
How to interpret and use characteristic energy C3 in this case?

2
Which is the longest distance traveled by a space craft?
4
What is the maximum speed an ion engine can propel a spacecraft at?
20
How long will it take Elon Musk's roadster to become the fastest ever car?
10
What is the fastest rover that has ever traveled on the surface of an extra-terrestrial body?
21
Who were the youngest and oldest persons in space?
8
What's the record for the fastest trip to the Moon?
4
Fastest rocket to reach space?
2
How do we get to Mars in a week (7 days)?