What maximum speeds can be expected from meteorites?

Yes, I know, c is the limit, but let's say we want to build a shelter that will be meterorite-impact-proof, on the Moon, or some asteroid or anywhere without the atmosphere. We can spot anything bigger than, say, 10cm early enough to destroy or deflect it with remote weaponry, but anything smaller than that will get through and the shield must hold. $Mass = 1{dm}^3 * 2g/{cm}^3$ (average asteroid density), $E=0.5mv^2$. We know how to convert energy to shield thickness, but we still need the v.

What are reasonable expected speeds of "fast" meteorites?

I kept wondering where this 72 km/s maximum is coming from, and I figured it out! This is the calculation:

Why? Firstly, it's obvious that the Earth is traveling at 30 km/s in its orbit. But what possible directions can the asteroid hit from? The most logical approach is to hit it moving the exactly opposite direction. That means we demand an asteroid in a retrograde orbit. Normally this won't happen for orbits in the inner solar system around the sun, but this came come from the Ort cloud or somewhere far away.

The idea is that an object very from the sun is disturbed and begins a highly elliptical orbit. These can be retrograde. It would also need to intersect with our orbit at its closest point to the sun (this is why we sum the two velocities).

Obviously this would be rare, but the principle is that anything moving faster than this when it hits the atmosphere obviously came from somewhere outside our solar system. This is my brief illustration of the concept. Earth is green, sun is yellow, and the object is grey. 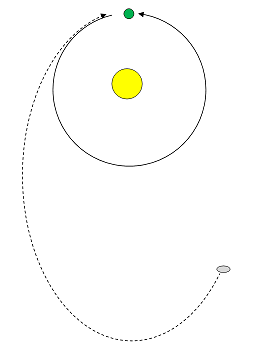 According to the American Meteor Society, meteorites usually hit the Earth's atmosphere going around 160,000 MPH.

The 70~ish top figure is also repeated in this answers.com answer.

The wide range in meteoroid speeds is caused partly by the fact that the Earth itself is traveling at about 30 km/sec (67,000 mph).

Also, there was recently a two to four meter meteorite that hit over California that was calculated to be going around 64k MPH.

researchers have calculated that the parent object of the Sutter’s Mill meteorite entered the atmosphere at 28.6 kilometers per second (64,000 mph).

The "American Meteor Society" states that meteorites typically enter the Earth's atmosphere at 11 - 72 km/s. This is not cited, but after some Googling it is a figure that is repeated often.

My understanding from basic physics is that when you calculate the requirements for escape velocity from a body's gravitational pull, the math is also able to point out the maximum accumulated velocity possible due to the pull of that gravity toward an object. In other words, while escape velocity calculates what is necessarily to counteract the body's gravitational force, the terminal impact velocity is the sum of that body's gravitational force as it accumulates over the course of the smaller body's acceleration from the farthest orbital reaches and plunges into the body as an impacting object. For our solar system, we're talking about the attractive force between the Sun's mass, the impacting body's maximum expected mass, plus whatever components of other solar system bodies (i.e. Jupiter, Earth) can be calculated to have a net boosting pull on that body. The latter are probably negligible compared to the Sun's pull across the farthest possible reaches. For asteroids, the upper limit is clearly much smaller than planet size. We can thus calculate a maximum terminal velocity due to gravity, upon impact, and this works out to approximately 160,000 mph. Another poster was incorrect in describing the highest value within a range by saying the speeds are "usually" that high. They are not, at all. In fact, 64,000 mph is the highest velocity we've directly measured from an asteroid/meteor so far, in our contemporary era of space travel and modern astronomy. That was the Sutter's Mill meteorite which was seen across the Western U.S. on November 1, 2016. The fastest possible impact velocity is thankfully seen so rarely on Earth that it probably has not ever occurred within the entire history of human existence. It's an upper limit - a theoretical maximum. I should note that comets must also be included in consideration, not just asteroids. Either one can become an impacting meteorite, and the calculations I've seen are from that perspective--what is the maximum impact velocity we might see from an object in the Solar System? An object can have its trajectory changed through an encounter with Jupiter, but that isn't going to cause more acceleration than the Sun's gravity is able to exert upon far more distant objects that eventually plunge in like cosmic bullets.

The velocity of impact seems well confined, with a highly populated lower limit of about 7 miles per second and a rarely observed or expected upper limit in the range of 18 miles per second. The energy of impact of the latter is, mass by mass, some 6 to 7 times as much as the first. Accordingly, it is the mass of the impactor which is to be more seriously reckoned with. The current bogeydroid threat, 101955 Bennu, at 500 meters diameter and 78 billion kg mass sucks the life out of all other potential threats with the resulting 1,000 megaton explosive impact. There should be absolutely no concern that we will not, within the next 10 years, meet Bennu at its' aphelion and give it enough delta-v to raise its perihelion enough to never cross Earth orbit again.

Not the answer you're looking for? Browse other questions tagged habitat protection meteorites or ask your own question.

6
What would an effective means be of protecting a habitat from UV-C radiation?
10
Have any missions suffered damage from meteorites whilst on the Lunar surface?
8
Might thermal mass, reflective insulation, and limiting light penetration allow heat control on the Moon? (reboot)